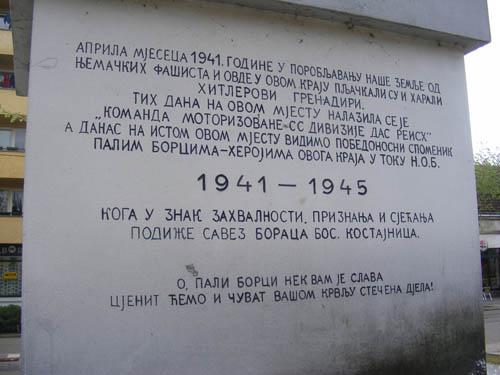 This memorial is dedicated to Tito's partisans who fell in the region during the Second World War, between 1941 and 1945. The memorial stone reads:

"In april 1941 came the enslavement of our country by the German fascists.
Hitler's grenadiers looted and raided in this area. In those days in this place was located the 'Command of Motorized SS Division Das Reich' and today at this same place we see a victorious monument to fallen soldiers-heroes of this area during WW2.

In gratitude, recognition and remembrance this monument is raised by partisan alliance, Bosanska Kostajnica.

Oh, fallen soldiers, glory unto you. We will appreciate and keep sacred your blood sacrifice!"