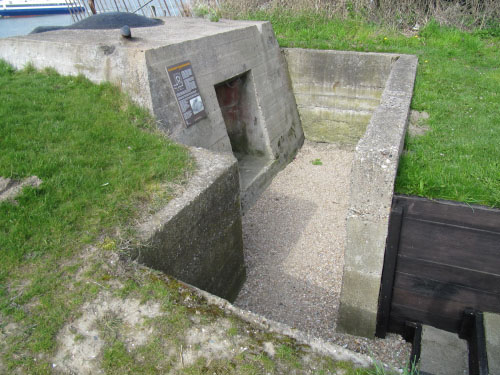 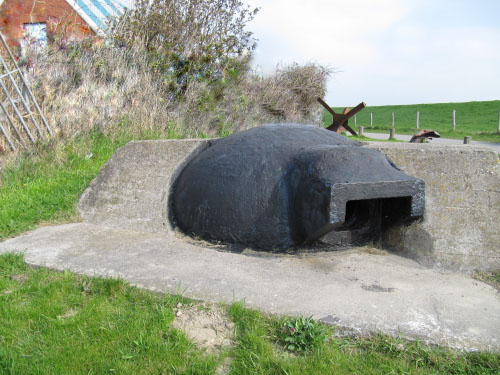 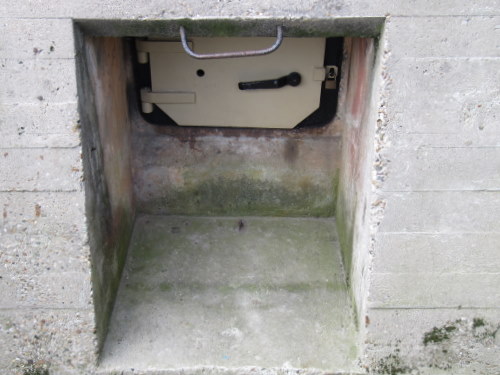 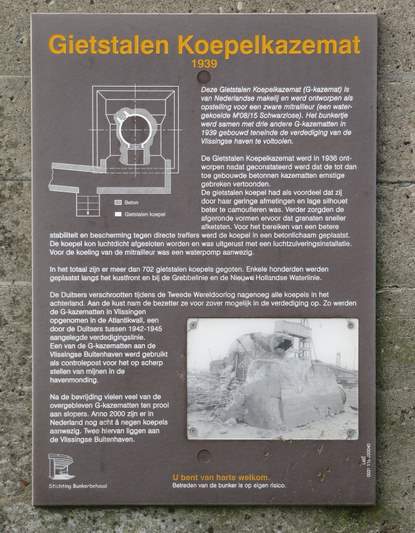 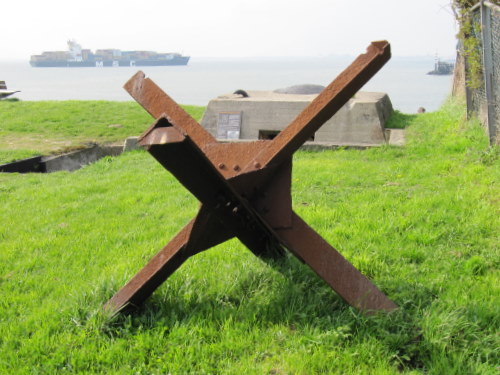 G-Casemate Flushing Outer Harbor.
The text on the information table of the Stichting Bunkerbehoud (The Foundation for Conservation of Bunkers) can be translated as follows:
The cast iron cupola-casemate (G-Kazemat) has been manufactured in the Netherlands and was developed as a pedestal for a heavy machine gun (the water cooled M.08/15 Schwarzlose). The pillbox was constructed in combination with three others in 1939 in order to finish off the defenses of Flushing harbor.
The cast-iron-cupola-casemate was engineered in 1936 after it had been established that the, until that time built, concrete pillboxes showed serious shortcomings. The cast iron radome had its advantages as by its the small measurements and lower profile it was easier to camouflage. Furthermore its rounded forms caused projectiles to ricochet. In order to obtain greater stability and protection against direct hits the cupola had been placed inside a concrete body. The radome could be closed off airtight and had been equipped with an air conditioner. In order to cool the machine gun, a water circulation pump was available.
In total over 702 cast iron cupolas have been manufactured. A few hundred have been placed along the coast line, near the Grebbelinie and the Hollandse Waterlinie (two strings of fortifications to prevent an invasion from the east).
The Germans have converted almost all turrets behind the coastline into scrap. At the coast itself the occupying forces included them, where possible, into the Atlantik Wall. Thats how the G-Kazematten were used by the Germans in their defense lines. One of the casemates at the outer harbor of Flushing was used for the rigging of mines in the harbor approaches.
After the liberation many of the casemates were torn down by demolishing contractors. In the year 2000 in The Netherlands there are about eight to nine cupolas left. Two of those are situated at the outer harbor of Flushing
A complete description of the Cast Iron Casemate can be found on the internet site of the Stichting Bunkerbehoud - www.bunkerbehoud.com

Picture nr 1: The G-Kazemat.
Picture nr 2: The cast iron cupola.
Picture nr 4: Information table of the Stichting Bunkerbehoud.
Picture nr 5: A Czech so called "Hedgehog" on the dike near the casemate.