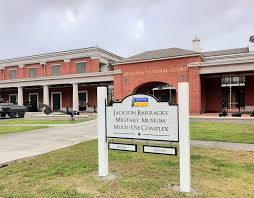 The Jackson Barracks Military Museum tells the story of Louisiana Citizen­ Soldiers from the colonial period to current operations.

The vivid story of Louisianas militia begins with early French settlement, moves through Spanish involvement in the American Revolution, the U.S. purchase of the territory, statehood, the Battle of New Orleans, the Mexican War, the Civil War, both world wars, the Cold War, and into the Global War on Terror. The ever evolving history also covers National Guard involvement in peacetime operations such as many natural and man­made disasters.