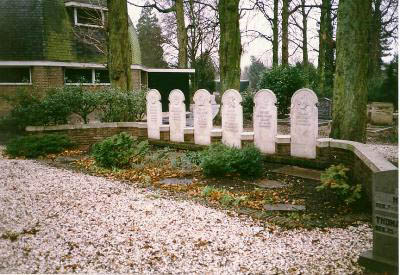 On the General Cemetery in Maarssen you will find six tombstones of Dutch war victims. Around those headstones a low semi circular wall has been built which shows the following text:
"They fell for freedom and justice, Maarssen May 5th, 1945."

Another casualtie, Willem (Wim) van der Kooij, is buried at the churchyard of the Protestant Church in Maarssen.

Close to this monument there is a wooden memorial cross with a round metal plaque which bears the text:
"Here three members of the K.P. died (members of the K.P. were resistance fighters called after the abbreviation of the name of the resistance movement against the Germans Knok Ploeg or Battle Squad) Joh. Been, Joh. Altena and Joh. C. van Maurik, 16 April, 1945."

This text is somewhat misleading as the exact location of the fatal shooting by which they were killed, was somewhere else. The three resistance fighters transported arms and ammunition, that had been airdropped, by truck to Utrecht. By accident the transport was strafed by an RAF plane on the Amsterdamse Straatweg near the quinine factory. The cross had been earlier placed at that spot.