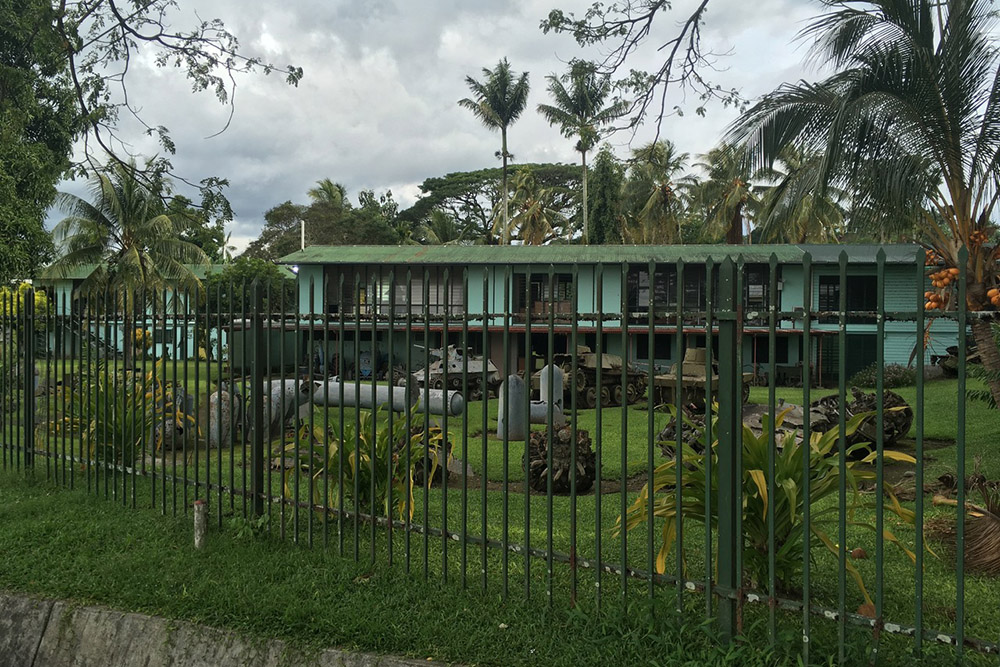 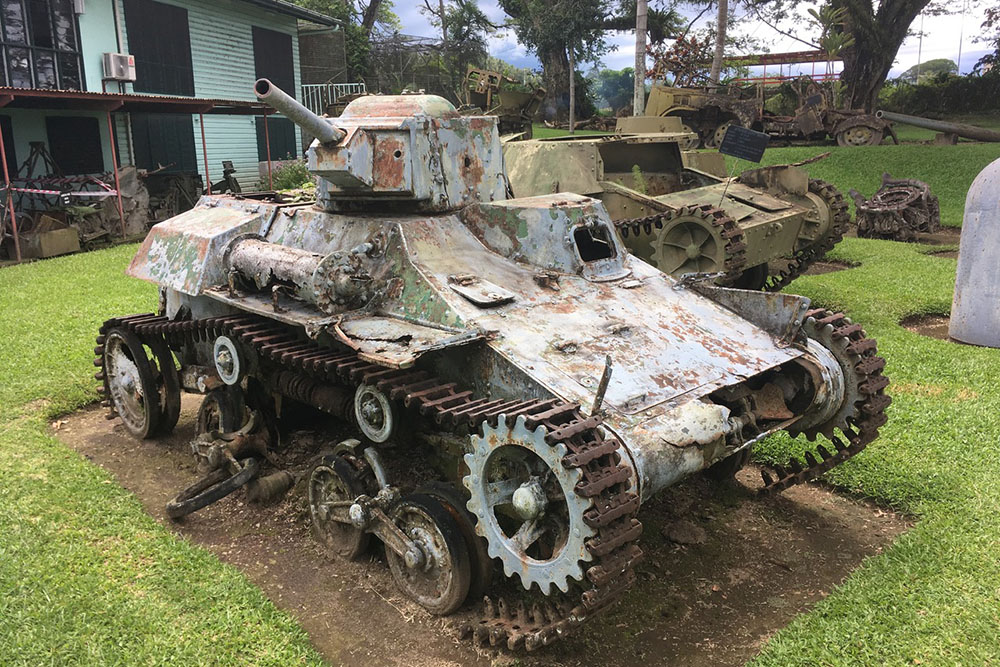 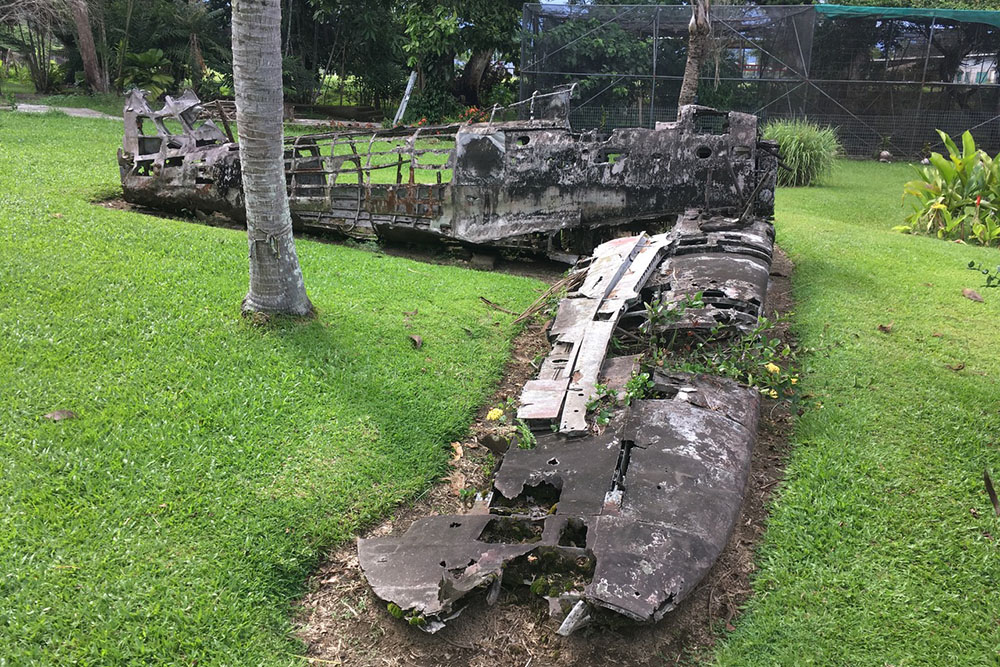 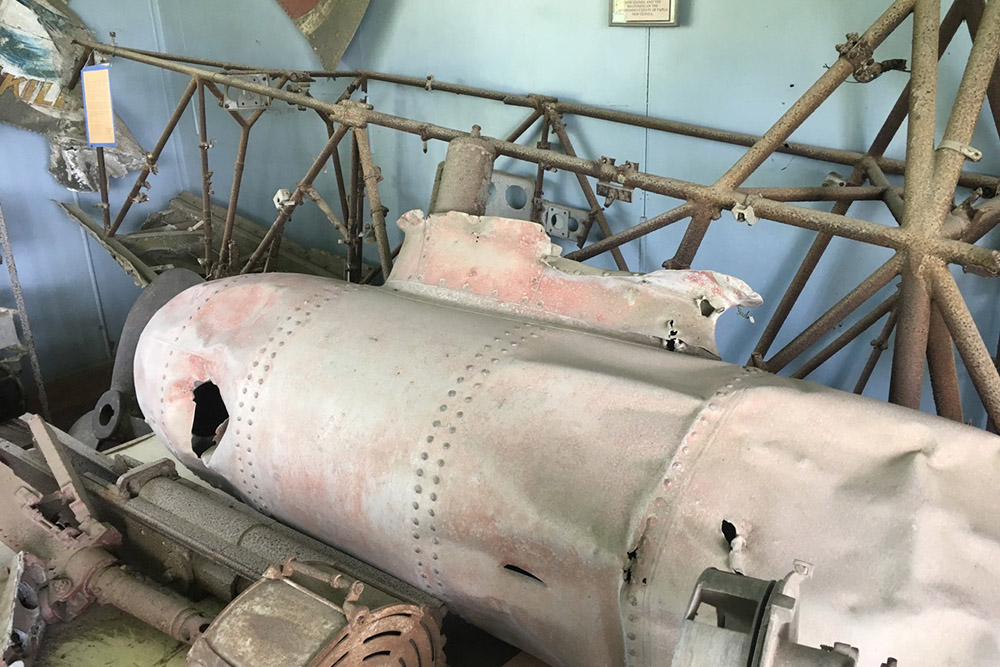 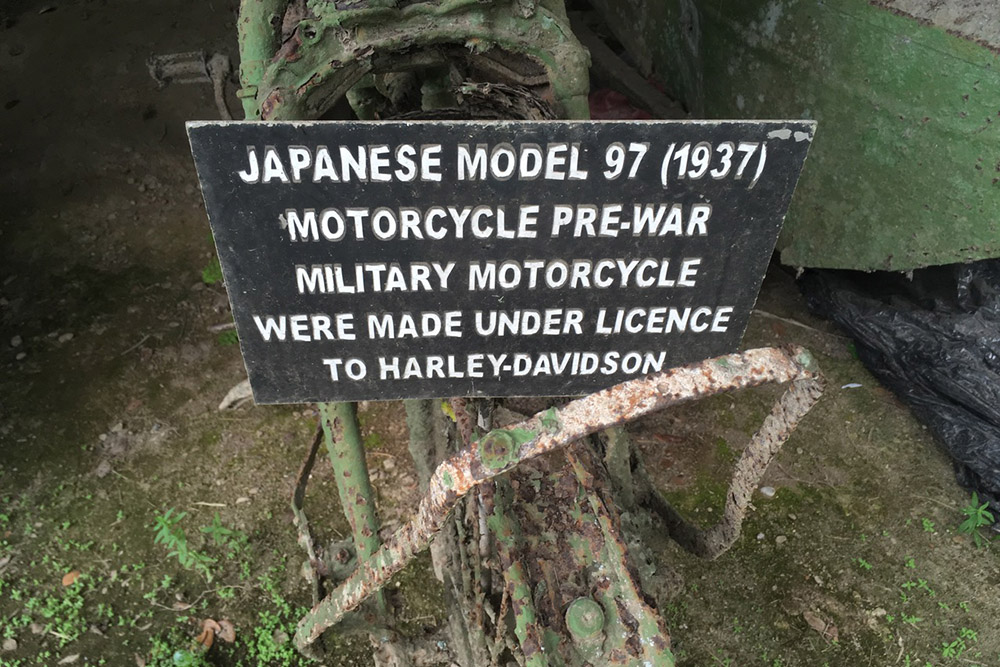 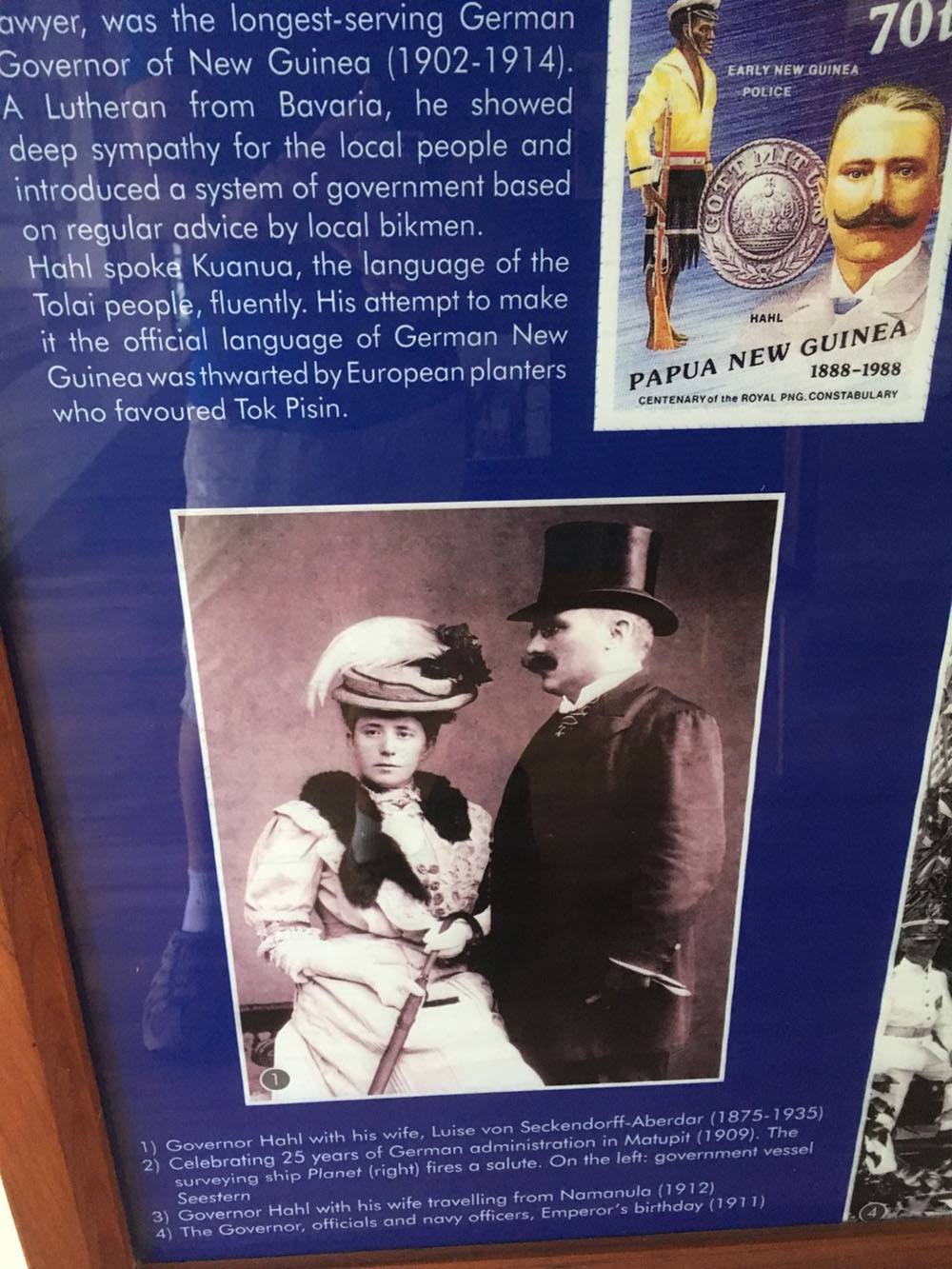 On a road near the waterfront in Kokopo, near the golf course and the Gazelle Hotel, is the Kokopo War Museum, which local volunteers keep going through the year.

On the grounds outside the museum there are the hulking remains, many Japanese, of rusting tanks, fighter planes, cannons, and other artifacts of war.

Inside there are photographs of the various air, land, and sea campaigns that enveloped New Britain and Rabaul, especially, in World War II.

On the grounds of the Kokopo War Museum is a local crocodile who answers to the name "Barney". Do not feed or annoy. The symbolic importance of the crocodile in the culture of Papua New Guinea can be seen in this wood carving which is on display at the National Museum in Port Moresby, PNGs capital.

There is a also a small gift shop on the property.

The director (when I was there) of the Kokopo War Museum was a long-time resident of Kokopo, a Mr. Lussick, whose father, Walter, had been an active official and planter during the period of Australian governance in New Guinea.

Officially German New Guinea was part of what was called Kaiser-Wilhelmsland, which stretched across the Pacific to the Northern Marianas (Guam and Saipan are there).

During some of that period the German governor was Albert Hahl, who from the museum pictures would seem to have had an active home life.

Occasionally a cruise ship will travel from New Zealand or Australia to Japan, making stops at the many islands in between, and that would be the best way to get a feel for the landscape of Germanys colonial possessions in the Pacific (although generally these trips ignore the topography of World War II, except in passing).

Margaret Macmillans Paris 1919 deals with the politics at Versailles that stripped Germany of its colonies in the Pacific and in Africa.

Queen Emma of New Guinea
Across the street from the Kokopo War Museum (although once it was all part of the same land parcel) is the Kokopo golf course also known as Ralum Golf Club, Kokopo.

Historically the land is of interest as it once belonged to "Queen Emma of New Guinea" who lived large from 1850 to 1913.

Technically she wasnt the queen of anything, but an attractive and sharp businesswomen, who had lovers, husbands, deals, wealth, large houses, lavish parties, and the occasional scandal.

On the site of her so-called cottage (known as "Gunantambu", which was lost to volcano eruptions and the 1942-45 Japanese occupation, etc.,) in Kokopo there is a resort hotel (guests can use the golf course) and next door is the parkland on which sits the Kokopo War Museum.

The land has stunning views of the sea. A night in the Gazelle International Hotel starts around $200.

What was interesting about Emma's seaside house in Kokopo is that some of the furniture in it came from the Samoa home of author Robert Louis Stevenson, who knew her family on Samoa. Apparently Emma inherited the desk at which Stevenson wrote "Treasure Island" and "The Strange Case of Dr. Jekyll and Mr Hyde."

Australian television watchers may have seen the mini-series, in the 1980s, devoted to her racy life and times. And there are some books (most out of print) about her reign, including a good one by Robert William Robson called "Queen Emma: The Samoan-American girl who founded an empire in 19th century New Guinea." 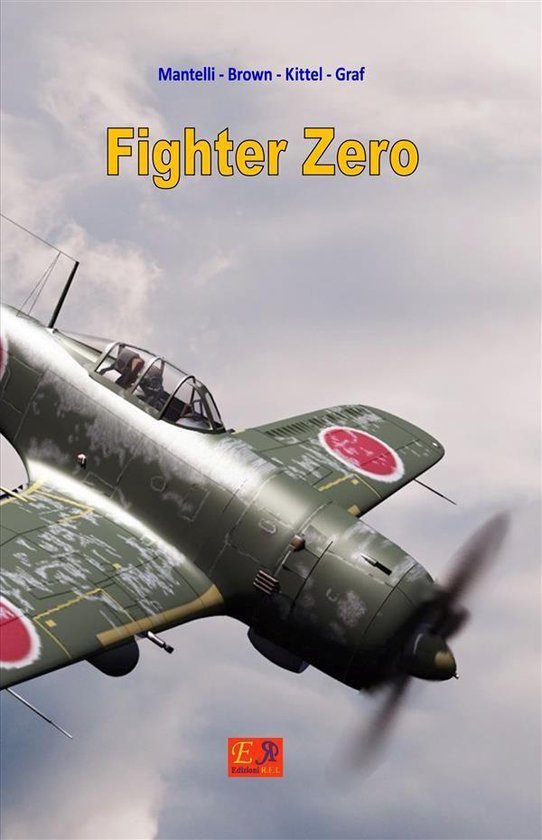 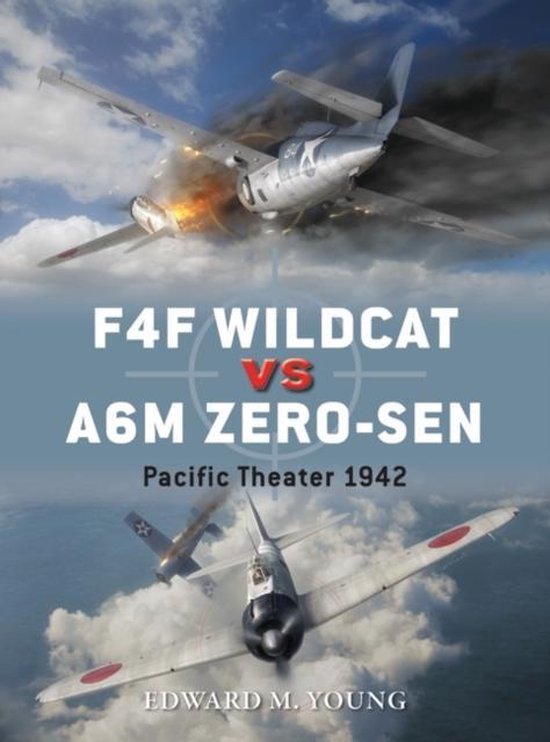 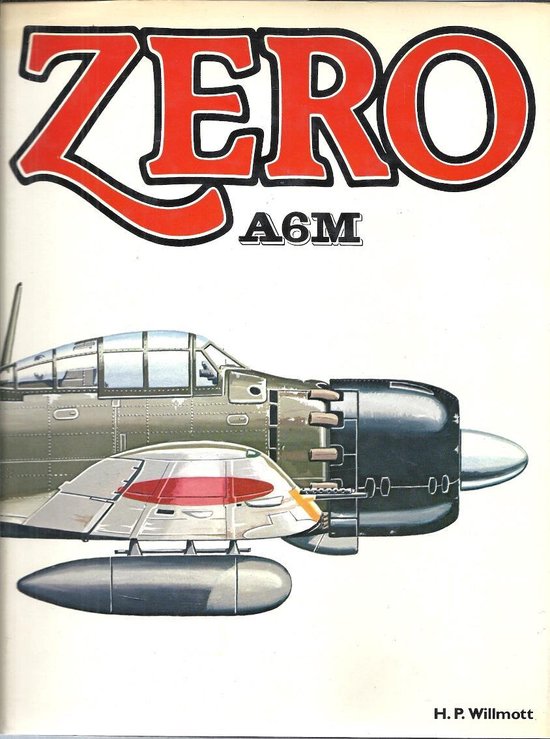