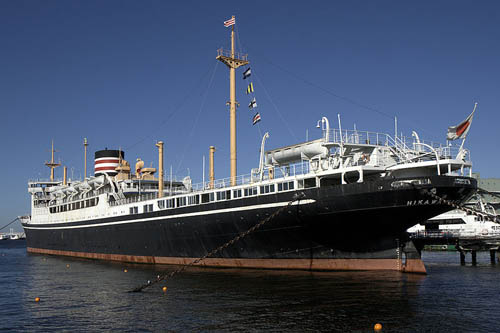 Th construction of the "Hikawa Maru" began in 1929 and was finished in April 1940. In the '30s, "Hikawa Maru" transported 82 jewish refugees from Europe to Japan. It was confiscated by the Imperial Japanese Navy on 21 November 1941 and was turned into a hospital ship. It was attacked by the USS SS-199 on 12 May 1942, but breaked off the attack when seeing the hospital markings. It transported 400 wounded from the Battle of Midway on 15 June 1942. The "Hikawa Maru" was again assaulted on 27 July 1942, this time by the USS Gar SS-206 but no attack is pressed when the hospital ship markings are observed. The ship was confiscated by the U.S. Navy after the war, which used it as transport ship for American army personnel between the United States of America and Japan.

The "Hikawa Maru" today:
It is currently in use as ship museum in the docks of Yokohama.