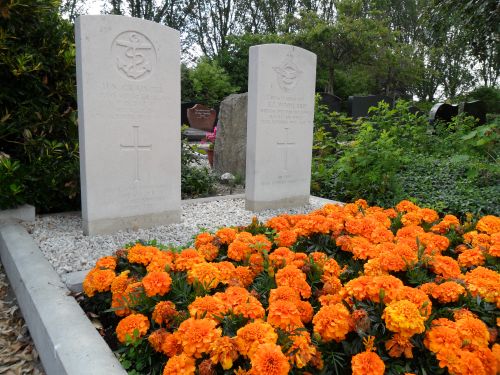 Ordinary Seaman Grainger was killed on 6 October 1942 when H.M.M.T.B (Her Majesty's Motor Torpedo Boat) 29 collided with an German Schnellboot. All ten crewmembers got killed. Eight of them are still missing. Grainger washed ashore at Monster and is buried here. Stoker 2nd Class Arthur Smith was found at Vlissingen and has his final resting place at the Flushing (Vlissingen) Northern Cemetery.

Sergeant Edwin Woollard was from Coulsdon, Surrey. He and his crew were posted to 142 Squadron in September 1942. They flew a mission to Milan on 24 October 1942. The crew of the Wellington X3455 was as follows:

The Operations Record Book mentions that the X3455 crashed near the Dutch coast at Schouwen Duiveland. All five crewmembers got killed during the crash. They washed ashore at different places. Shaddick is buried at the Westduin Cemetery in Den Haag, Hough at the Canadian War Cemetery in Bergen op Zoom, Watchem at the New Eastern Cemetery in Amsterdam and Reyburn at Rockanje.