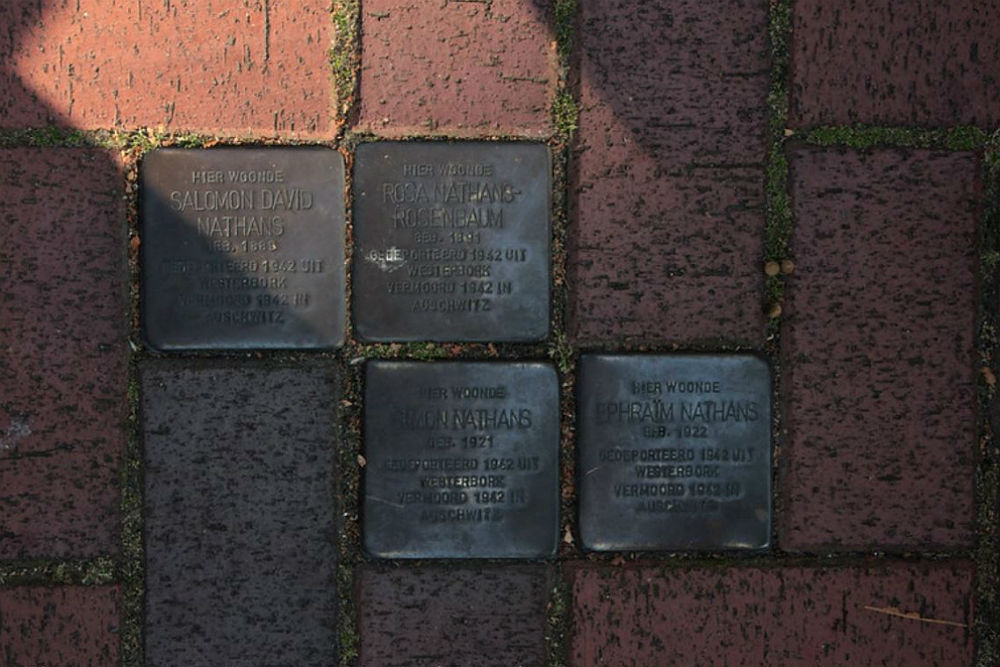 Salomon David Nathans and Rosa Rosenbaum married in 1919. She came to Haren, her husbands birthplace, where they had two sons  Simon and Ephraïm. The family kept a kosher home.

Salomon, called Sam, and Rosa purchased a shop at the corner of Rijksstraatweg and Kerkstraat, which they turned into a small business to sell fabric and to make such items as business uniforms, undergarments, socks, and shrouds. He also rode his bicycle to sell fabrics in nearby villages. Later they invested their profits in real estate.

The boys went to a public primary school on Kerkstraat. Simon, called Simi, then went to Groningen City HBS in Helpman and passed his final exams there in 1940. His brother, called Eeffi, began helping in the family business. Neighbors remembered the boys as shy and modest.

The anti-Jewish regulations began to affect the Nathans, and by the end of 1941 they were no longer able to make a living from their business. In addition, from September 1941 Jews were not allowed to change residences without permission. A nighttime curfew was in place.

At the beginning of July 1942, the boys asked to be approved for a labor camp. Their father, not in the best of health, wanted to go with his sons. On 10 July, they went by bus to Westerbork. On the night of the 14/15 July, they were deported on the first transport to Auschwitz. They were murdered there  Simon first on 21 August 1942 at age 21, Ephraïm on 2 September at age 19, and Salomon by the end of September at age 53.

Rosa Nathans was alone. The shop was closed and sealed. She had no word from her husband and sons. Her housekeeper offered a hiding place, but Rosa wanted to wait for her family. On 27 November 1942, she was taken to Westerbork. She was there less than two weeks before she was deported on 8 December to Auschwitz, where she was murdered on the 11th. She was 51. Six weeks later, the police and city workers stole the contents of the Nathans home and business.