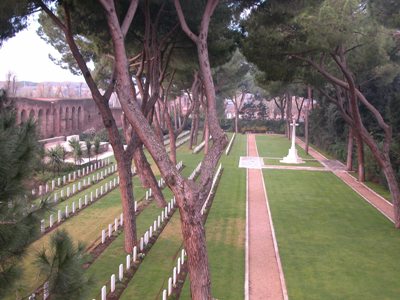 On 3 September 1943 the Allies invaded the Italian mainland, the invasion coinciding with an armistice made with the Italians who then re-entered the war on the Allied side. Progress through southern Italy was rapid despite stiff resistance, but the advance was checked for some months at the German winter defensive position known as the Gustav Line.

Operations in January 1944 landed troops behind the German lines at Anzio, but a breakthrough was not achieved until 18 May when, after fierce fighting, Cassino finally fell to the Allies.

Rome was taken on 3 June as the German withdrawal continued.

The cemetery was started shortly afterwards and was used mainly for burials from the occupying garrison, but a few graves were brought in from the surrounding country and some soldiers and airmen who died as prisoners of war in Rome are also buried there.