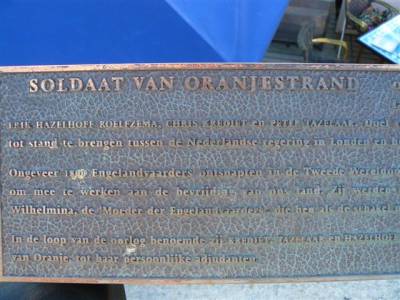 Erik Hazelhoff Roelfzema experienced the Second World War a bit different from other people in the Netherlands. The student resistance, escape from occupied territory, fighting from London, secret service, secret landings at Scheveningen, serving as a pilot in the Royal Air Force and attacks on Berlin led him to become the adjutant of Queen Wilhelmina with whom he returned to Dutch soil on the 2nd of May in 1945. The dangerous escape routes towards England started at the beach in Scheveningen

In the book Soldier of Orange by Erik Hazelhoff Roelfzema and which was edited after the war, Erik said to be curious whether Anneville, the homestead of Wilhelmina, still existed. Consequently, José Bontje decided to start to investigate this. One thing followed from the other and finally José wrote to the council of the city of Den Haag (of which Scheveningen is a part) whether there was a possibility to name a street after the Soldier of Orange. In view of the very strict ruling that has been issued for such event, it appeared not be possible. But Willem Post, a publicist, insisted in trying and he generated the idea to not name a street but a part of the beach at Scheveningen after these heroes. Next to that, the beach also had to be a monument for the so called "England-sailors". Because of the time invested by the politicians Bruins and Deetman this monument has become a reality on 24 April, 2003. Erik Hazelhoff Roelfzema has personally unveiled the plaque and definitively re baptized this part of the beach as the "Soldier of Orange Beach". The exact size of the section of the beach that has been named after him is not known.