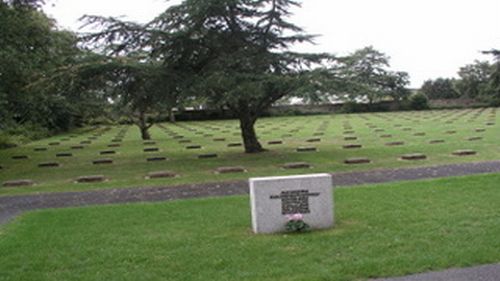 At the German War Cemetery Pornichet a total of 4944 German war victims lay to rest.

The war cemetery was originally constructed by the Wehrmacht and was placed directly besides the civil cemetery of St. Sebastien. At first a total of 1753 deaths of the surrounding area were her laid to rest. Directly after the war, the French extended thit total to 2672.

After a treaty between the Germans and the French in 1955, it was decided to extend the Pornichet cemetery woth the graves form the departments Loire-Atlantique, Maine-et-Loire, Vendée and Deux-Sévres and also with several fieldgraves in the area. By this the number was extended with another 2163 graves.