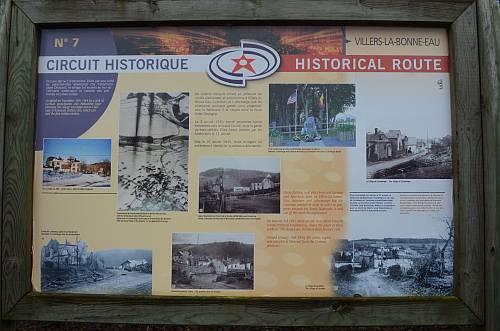 Occupied on December 19th 1944 by a unit of German parachutists (5th Fallschirm Jäger Division), the village was subjected to a barrage of American artillery fire, which claimed the first civilian victims.

Heavy fighting took place between German and American units in Villers-La-Bonne-Eau, Lutrebois and Lutremange but the Germans wanted to keep in order to progress towards the Route Nationale 4 and cut off the Arlon-Bastogne road.

On January 3rd 1945, thirty people were taken towards Grand-Duchy of Luxembourg, under the guard of three soldiers. The Americans liberated them January 11th.

Around January 10th 1945, the whole region was completely liberated from the German presence.

To reach information board 8
Follow in the direction of Bastogne. Cross the village of Lutrebois and continue on towards Remoifosse. Take Route Nationale 4 and take a right towards Bastogne. After the crossroads with the road to Wiltz, you will find the Patton monument on your left hand side.