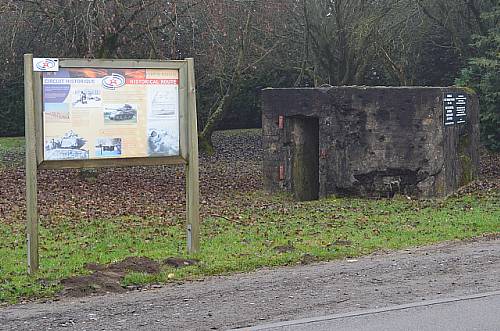 When the 101st Airborne arrives in Bastogne, the 326th enjoyment battalion is charged with the defense of the area between Marvie and the route de Neufchâteau.

In Remoifosse they stop the German emissaries who have to hand over the ultimatum to McAuliffe on December 22, 1944. They get the well-known answer: "Nuts".

On December 26, the team of Bogges, Patton's vanguard, coming from Assenois, first eliminated a group of Germans near the fort. Fort Devèze (after the name of the Belgian Minister of War) was part of a series of defenses built around 1935 to defend Belgian neutrality. The Bogges team then comes into contact with the defenders of the city, who are hidden in the fox holes. The encirclement has been broken. The next day, US forces of the 11th Armored Division and of the 87th Infantry committed themselves to maintain and expand this corridor to provide resupply and evacuate civilians.

To go to board 10
Follow the road to Assenois; stop at the church.