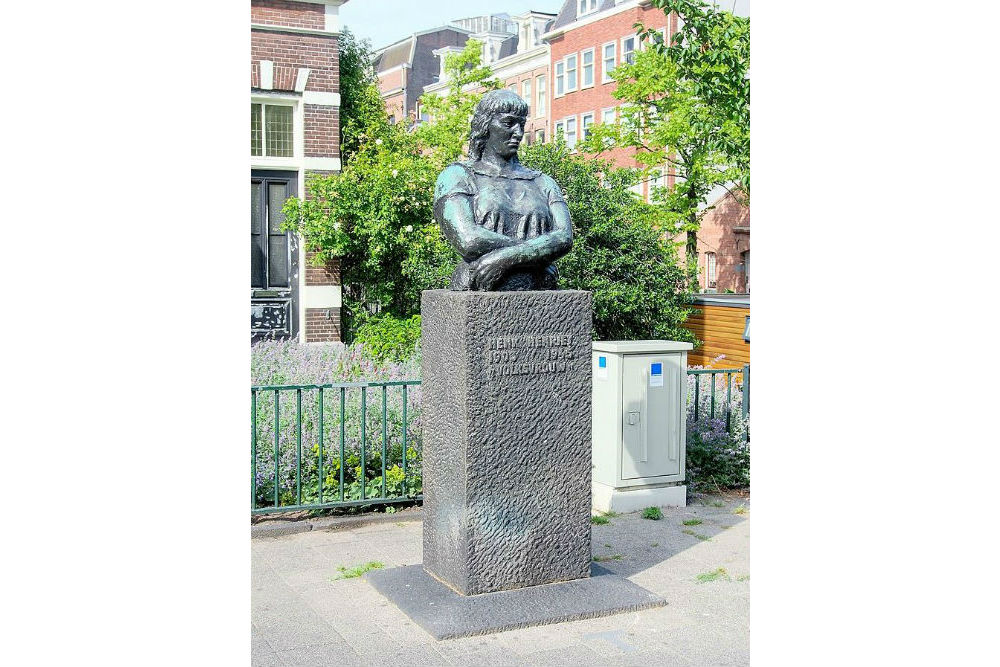 This monument on Marnixplein is a memorial to the Dutch artist, Henk Henriët. It is a bronze cast of his 1930s sculpture of a folk woman. His wife was the model.

Hendricus Antonius (Henk) Henriët was born in Amsterdam in July 1903. His talent for drawing was discovered by an employer  a bookseller. He studied at several schools, including in Paris. Over his life, his art included paintings and drawings of portraits, figures, and still lifes, graphic art, and sculpting.

In 1923, he started living with Gerarda Antonia Maria (Tonia), the married sister of a childhood friend. She divorced her husband in 1930. When Henk and Tonia finally married in 1939, they continued their open relationship.

In the 1930s he became a communist and a member of the anti-fascist Union of Artists for the Defense of Cultural Rights [Bond van Kunstenaars ter Verdediging van de Kulturele Rechten]. As a member of the resistance, he forged documents and provided hiding places. In December 1944, he was arrested, taken to Amersfoort, and then in February 1945 to Neuengamme concentration camp.

Henk Henriët was one of thousands of prisoners moved in Apri 1945 from Neuengamme to the ship Cap Arcona, a floating concentration camp. That ship and several others containing prisoners in inhumane conditions below decks were intentionally mingled among German military ships in Lübeck Bay near Neustadt. On 3 May 1945, the British bombed the ships in the bay to prevent Germans from escaping to Denmark and Norway. Over 7,000 concentration camp prisoners, including Henk Henriët, died from smoke inhalation, fire, or drowning. Five days later, Nazi Germany signed its unconditional surrender to the Allies.

For more information, see the article "Floating concentration camps in the Bay of Lübeck."