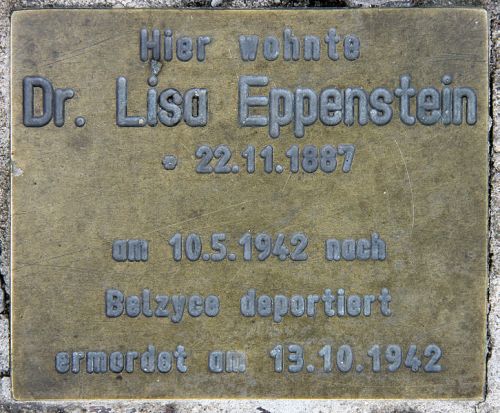 Dr. Eppenstein was a teacher at the Familienschule at Oranienburger Strasse 20. This Protestant-Catholic school was established in 1939 for non-Aryan Christian children. After the school was closed, she went to relatives in Jena, but she was denounced there. Dr. Eppenstein was deported first from Jena to Weimar. Then on 10 May, she and 1,000-1,200 others were put in cattle cars on train Da 27 and deported to the Belcyze ghetto, 26km southwest of the station at Lublin. Ghetto conditions were harsh, and many were killed by hunger and disease. Only 3 persons from this deportation are known to have survived.

Dr. Eppstein was one of 11 staff of Father Grüber. Denksteine were placed for each of them at the request of the Protestant Relief Agency in Charlottenburg-Wilmersdorf. These memorials are not part of Gunter Demnig's Stolpersteine art project: the requested text did not fit with his project vision, and he suggested an alternative.