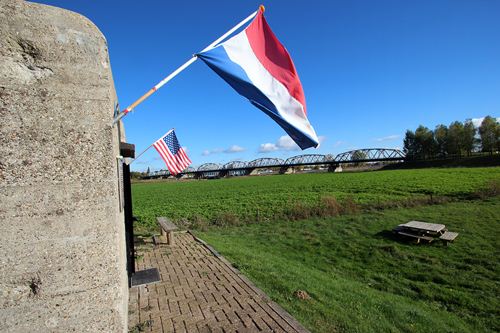 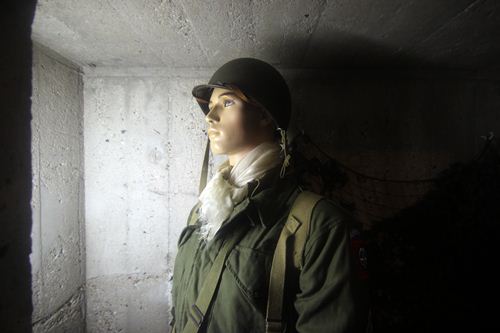 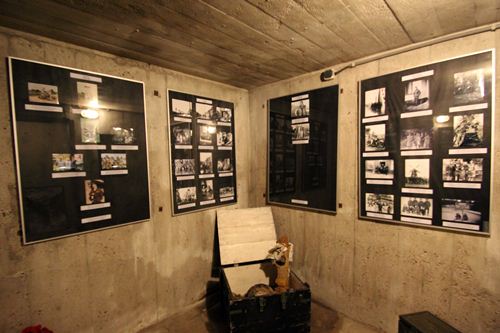 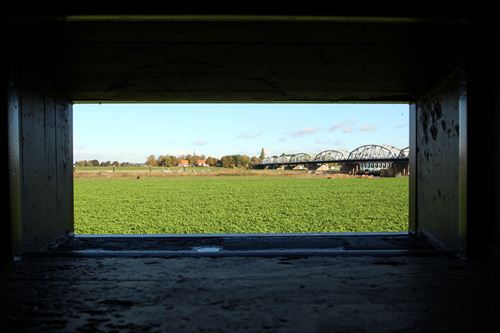 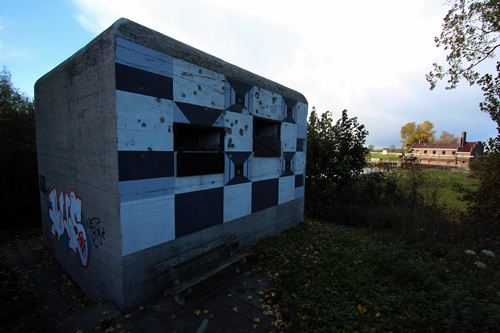 b] History [/ b]
In 1936, two casemates were placed to protect the bridge over the Maas. Both are on the south bank. [towid] 866, Casemate North [/ id] covers the north side of the bridge, [towid] 21427, Casemate South [/ id] covers the south side. South is the larger of the two and can shoot longitudinally across the bridge. In May 1940, the bridge was blown up after some skirmishes. It was later restored. In 1944, during Operation Market Garden, Lieutenant John S. Thompson captured the bridge with his platoon after a bazooka gunner had disabled the German anti-aircraft guns on bunker South. In 2004, a monument to this action was unveiled near the bridge, [towid] 591, the bridge [/ id] was also named after Thompson.

In 1999 the casemates were reopened to the public. A small group of volunteers managed to build up the collection. From 2011, the casemates as Graafs KazemattenMuseum, together with the [url = http: //www.graafsmuseum.nl/] Graafs Museum [/ url] in the city itself, are part of the Graeft Foundation.

Details [/ b]
The museum is located in both river casemates near the Maas bridge. That alone makes it a very special location. The history of May 1940 is told in Casemate North, and Operation Market Garden and the liberation in 1944 in Casemate South. A Dutch uniform from 1940 and an American uniform from 1944 make both casemates worth visiting. It is easy to see how both casemates cover parts of the bridge. You can see through the loopholes exactly what could be aimed at. The view from Casemate South, directly across the bridge, is a good indication of how the defense was set up.

Why visit? [/ b]
The surroundings of the museum, the two casemates, the bridge and the pumping station "Van Sasse" have not changed since the end of the war. That alone makes it more than worth a visit. The fact that you can still enter both casemates makes it even more beautiful of course. They don't look very big from the outside. Casemate North, however, has two floors and South even three. The bottom floor of both is underground. They are casemates of which not many can be found in the Netherlands.

The museum itself has a large collection of photos and other material that offer a special glimpse into the past, from the period May 1940 as well as the Market Garden period. Also special is an original map of General Gavin, then commander of the 82nd Airborne Division. The map was part of a bet on who would be first in Berlin. Unfortunately for Gavin, the Russians won.

Location [/ b]
Grave is an old fortified town, through the [url = http: //www.toerismegrave.nl/] VVV [/ url] guided tours are organized through the town. The Graafs Museum is of course also worth a visit. The [towid] 39, Liberation Museum [/ id] in Groesbeek and [towid] 1, Liberty Park [/ id] in Overloon are also reasonably close. In Kalkar, across the border in Germany, a complete [url = http: //www.wunderlandkalkar.eu/] amusement park [/ url] has been built in an old nuclear power plant. It is also possible to continue to Xanten where a [url = http: //www.apx.lvr.de/] Roman town [/ url] has been reconstructed.

The future [/ b]
Now that the casemates are part of the Graeft Voort Foundation, this offers the opportunity to further professionalise. The collection will be expanded in collaboration with other museums. More school classes from the region will be invited to teach children what happened here. All this makes a visit to the casemates certainly worthwhile.