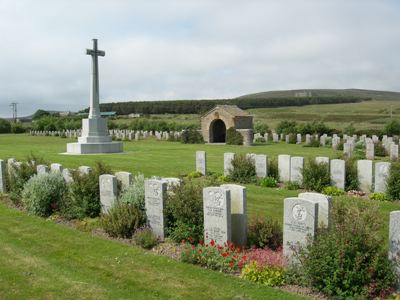 Lyness Royal Naval Cemetery was begun in 1915 when Scapa Flow was the base of the Grand Fleet. Lyness remained as a Royal Naval base until July 1946 and the cemetery contains graves from both wars. There are 445 Commonwealth burials of the First World War, 109 of which are unidentifed. The majority of the graves are of officers, ratings and members of the land forces lost from H.M.S. "Hampshire," "Vanguard," "Narborough" and "Opal." The 200 burials of the Second World War in the cemetery include those of 26 men from H.M.S. "Royal Oak", which was sunk off Longhope in Scapa Flow by a German U-boat on 14 October 1939. 8 of these burials are unidentified. The cemetery also contains the graves of 14 sailors of the German Navy - the High Seas Fleet was interned at Scapa Flow after the 1918 Armistice - 4 further German burials including 2 unidentified airmen and 1 Norwegian war grave. There are 4 non-war Service burials, 2 being unidentified British soldiers.