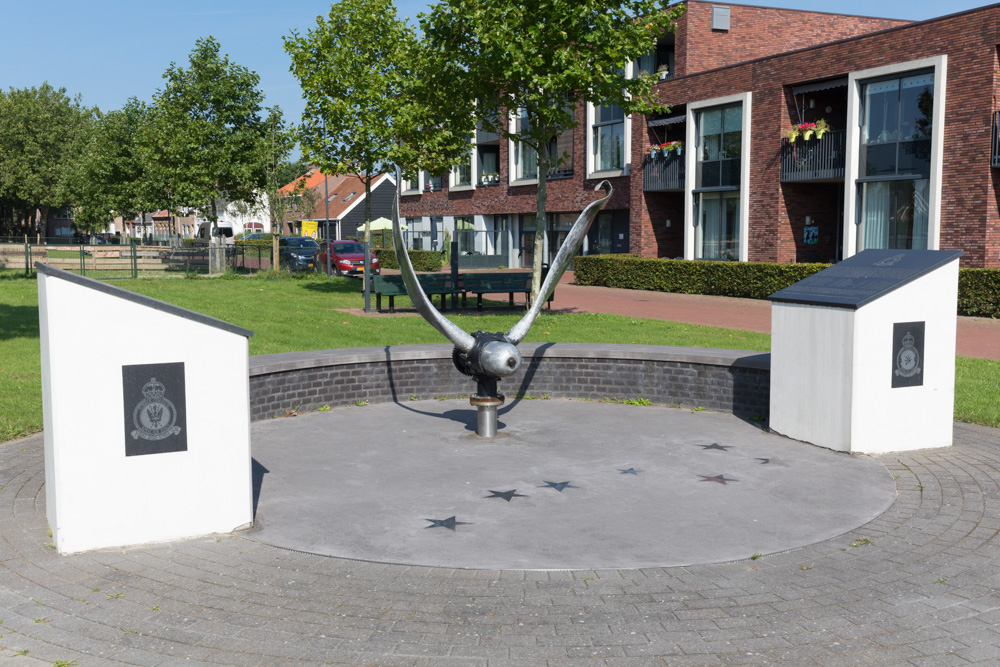 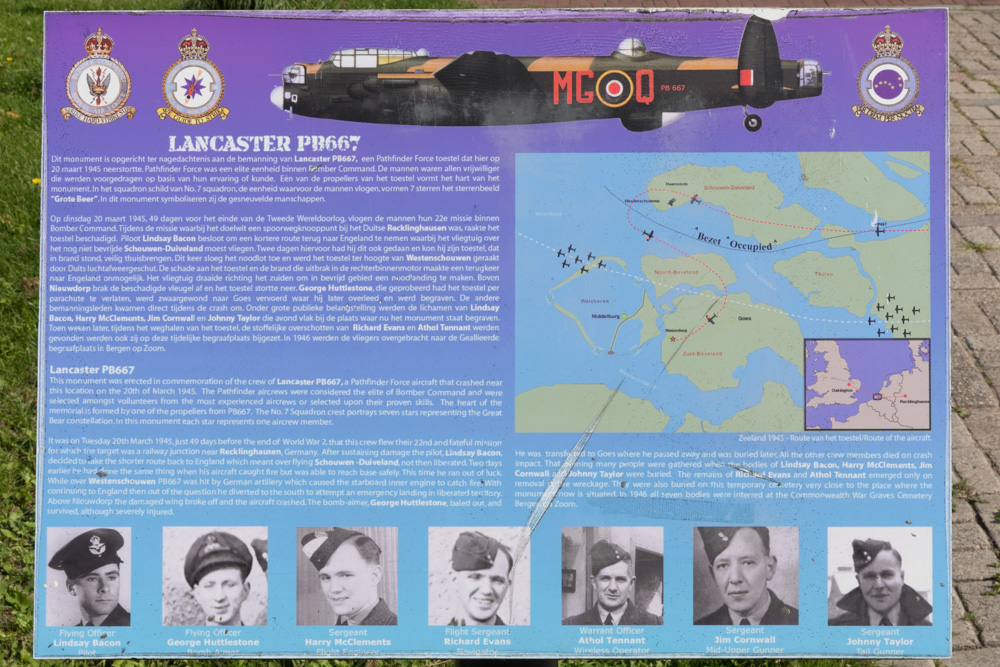 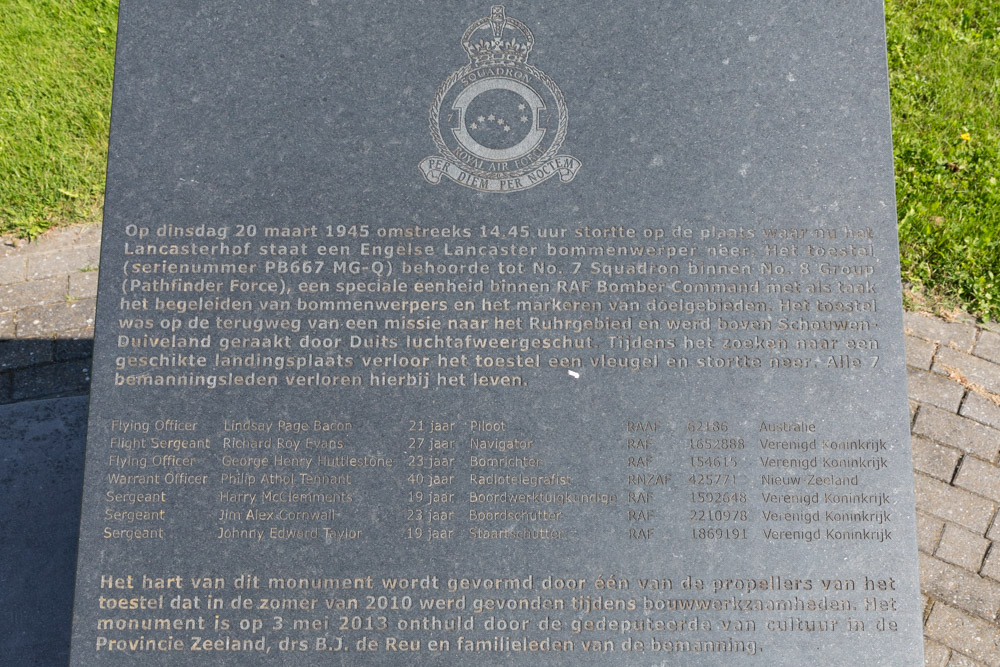 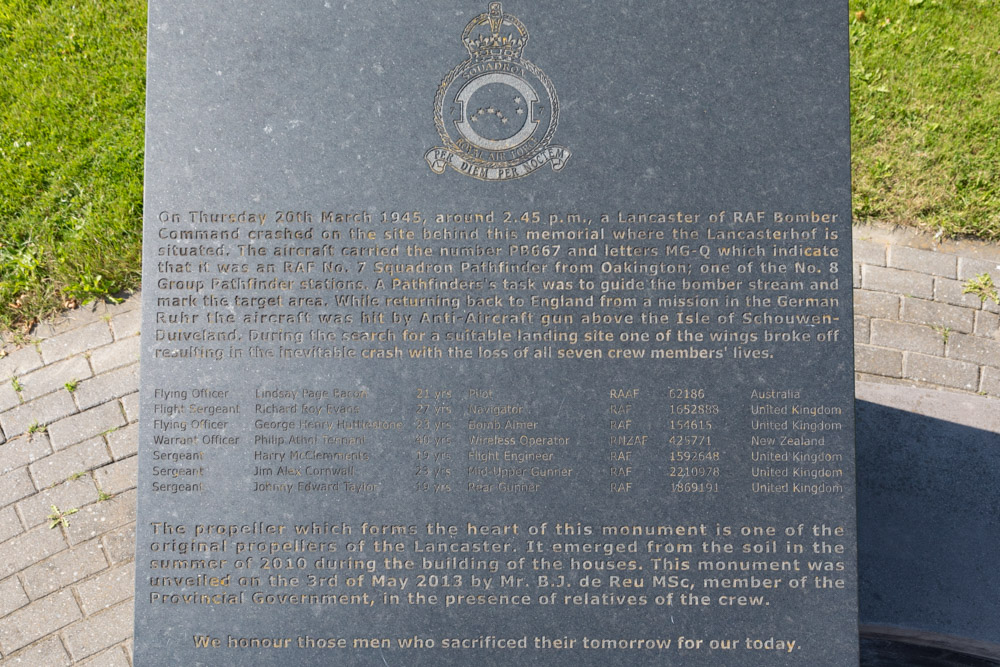 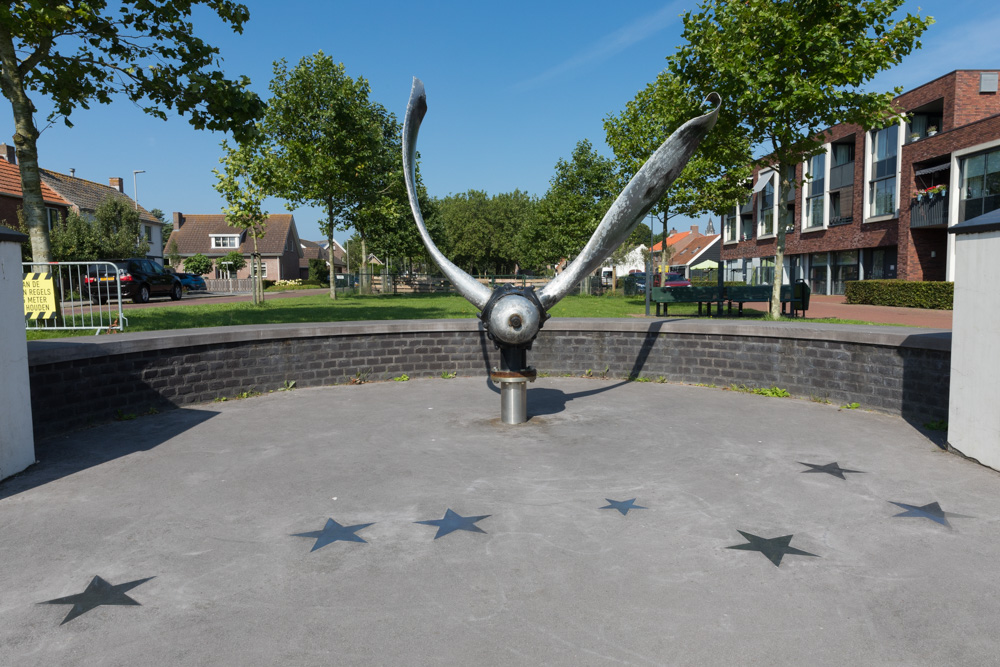 Text on the information board:
This monument was erected in commemoration of the crew of Lancaster PB667, a Pathfinder Force Aircraft that crashed near this location on the 20th of March 1945. The pathfinder aircrews were considered the elite of Bomber Command and were selected amongst volunteers from the most experienced aircrews or selected upon their proven skills. The heart of the memorial is formed by one of the propellers from PB667. The No. 7 Squadron crest portrays seven stars representing the Great Bear constellation. In this monument each star represents one aircrew member (Picture 4).
It was on Tuesday 20th March 1945, just 49 days before the end of World War 2, that crew flew their 22nd and fateful mission for which the target was a railway junction near Recklinghausen, Germany. After sustaining damage the pilot, Lindsay Bacon decided take the shorter route back to England which meant over flying Schouwen-Duiveland, not then liberated. Two days earlier he had done the same thing when his aircraft caught fire but was able to reach base safely. This time he ran out of luck. While over Westenschouwen PB667 was hit by German artillery which caused the starboard inner engine to catch fire. With continuing to England then out of the question he diverted to the south to attempt an emergency landing in liberated territory. Above Nieuwdorp the damaged wing broke off and the aircraft crashed. The bomb-aimer, George Huttlestone, baled out and he was transferred to Goes where he passed away and was buried later. All the other crew members died on crash impact. That evening many people were gathered the bodies of Lindsay Bacon, Harry Mc Clements, Jim Cornwall and Johnny Taylor were burried. The remains of Richard Evans and Athol Tennant emerged only on removal of the wreckage. They were also burried on this temporary cemetery very close to the place where the monument now is situeted. In 1946 all seven bodies were interred at the Commomwealth War Graves Cemetery Bergen op Zoom.

The propeller which forms the heart of this monument is one of the original propellers of the Lancaster. It emerged from the soil in the summer of 2010 during the building of the houses. This monument was unveiled on the 3th of May 2013by Mr. B.J. de Reu MSc, member of the Provincial Government, in the presence of relatives of the crew.

We honour this men who sacrificed their tomorrow for our today.

Additional, not on the sign:
There was a seventh crew member aboard: Sergeant J.E. Taylor, staartschutter.