Commonwealth Memorial of the Missing Medjez-el-Bab 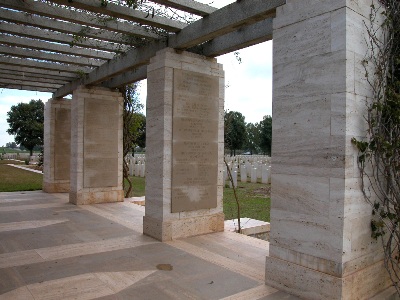 Medjez-el-Bab was at the limit of the Allied advance in December 1942 and remained on the front line until the decisive Allied advances of April and May 1943. Medjez-el-Bab War Cemetery contains the Medjez-el-Bab Memorial. It commemorates almost 2,000 men of the First Army who died during the operations in Algeria and Tunisia between 8 November 1942 and 19 February 1943 and those of the First and Eighth Armies who died in operations in the same areas between 20 February 1943 and 13 May 1943 and who have no known graves.