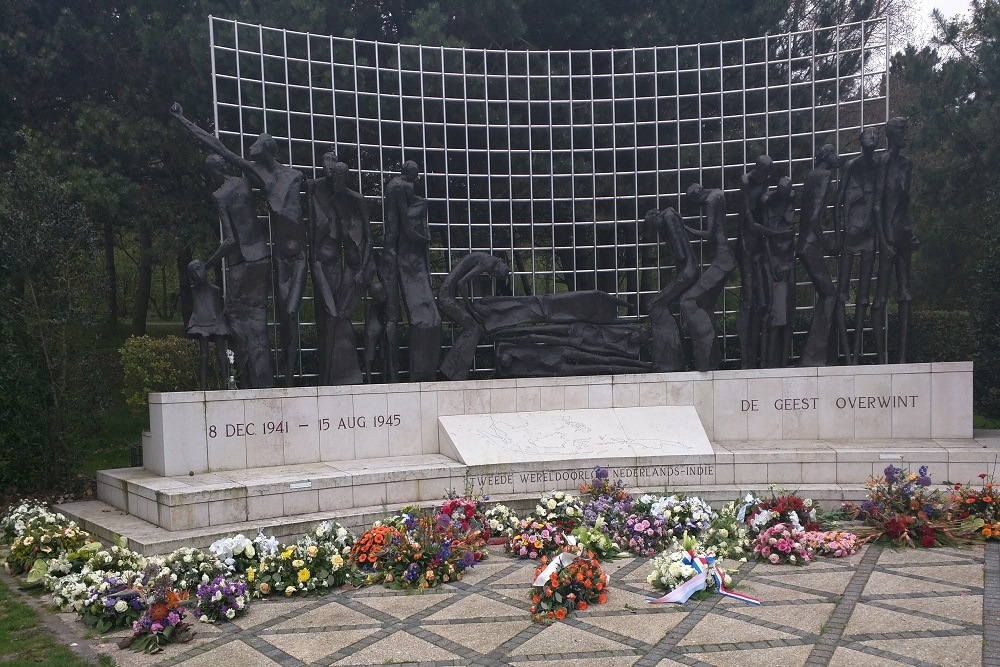 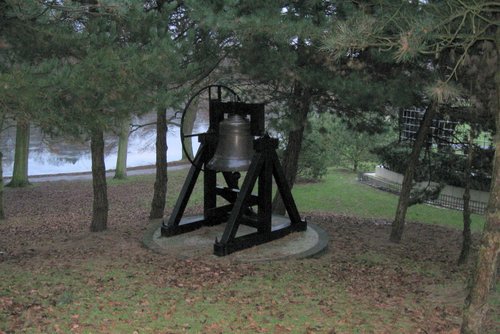 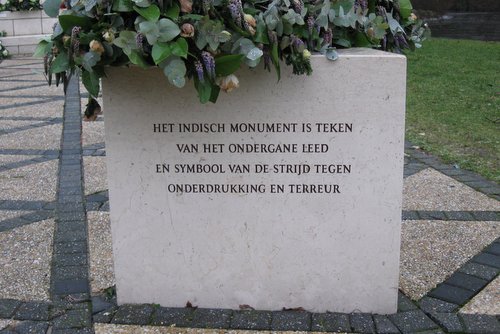 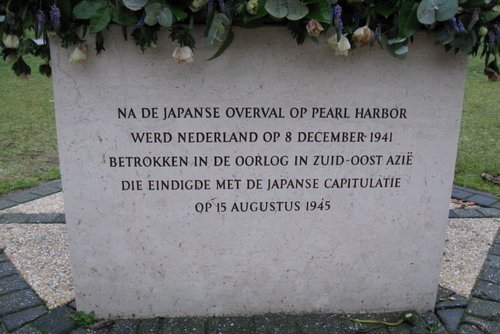 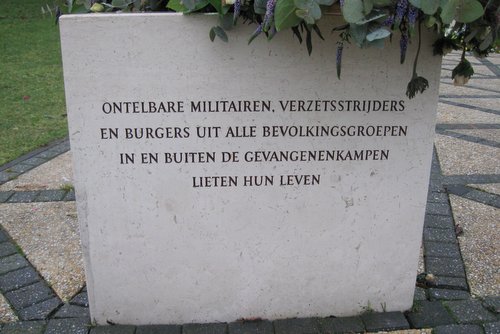  the women and children in the camps
 the prisoners of war, the Eurazians who in general stayed out of the camps
 the most severely victimized group of hundreds of thousands of Romusha
 the labourers that were recruited under false pretences and exploited as slaves.

The monument depicts seventeen bronze figures of different ages, surrounding a bier bearing Death at the centre. A representation of suffering, agony, despair and protest.

Behind the shapes, there is a fence. This fence symbolises solidarity to one person, but to the other an enclosed prison.

The statues on the outside corners point towards the liberation. In the middle of the monument there is a map of Indonesia. Below this map you may translate the text as follows: Second World War Dutch Indies. The text on the left of the monument reads "8 Dec. 1941  15 Aug. 1945." , the dates of the declaration of war by The Netherlands to Japan and the capitulation by Japan after the bombing of the Japanese cities Hiroshima and Nagasaki. Formally the Second World War ended on the 15th of August 1945 for The Netherlands, and not on May 5th, 1945.

The text on the right-hand side of the monument can be translated to:"The spirit conquers." and is virtually equal to the texts on the eight Fields of Honour in Indonesia and seven Fields of Honour which are spread all-over South-East Asia, as well as on the graves of Dutch victims of the war.

The many flowers that are always laid at the base of the monument originate from funerals of survivors of the war in the East Indies.

In front of the Monument there is a small triangular shaped column. In 2005 an urn containing the soil of the Fields of Honour in South-East Asia was enclosed into this column. Also in 2005, a miniature replica of the Monument was placed in Madurodam (the miniature landscape with the most well-known landmarks of The Netherlands, also in The Hague).
On the top of the small column a text describes data of the design and its unveiling.

Texts on the three sides of the column can be translated as follows:
1. The East Indies Monument is a memorial of the agony suffered and a symbol of the battle against repression and terror.
2. After the Japanese attack on Pearl Harbor, The Netherlands became involved in the war in South-East Asia on December 8th, 1941 which ended on August 15th, 1945.
3. Countless soldiers, resistance fighters and civilians from all groups of the population lost their lives both inside and out of the prisoner camps.

In 1995 a bronze bell was installed behind the Monument and was rung for the first time in the presence of Queen Beatrix. This bell emphasises that you are at a sacred place at the East Indies Monument.

It had been established that the Monument needed a sound and a voice. A voice memorising the victims of the war of those days, but also a voice that calls to commit to peace, now and in the future.
The East Indies Monument has been adopted by the Vrijzinnig Christelijk Lyceum at the Van Stolkweg in The Hague.