Crash Location 21 Lest We Forget Hellendoorn 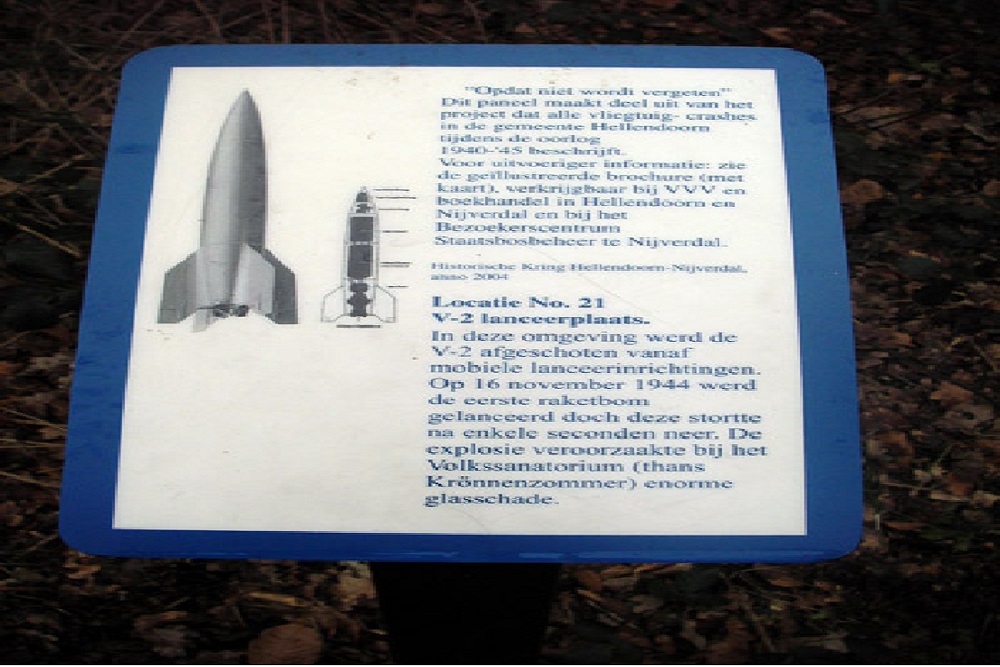 "Lest not forget"
This panel is part of the project that describes all aircraft crashes in the municipality of Hellendoorn during the war 1940-45.
For more detailed information: see the illustrated brochure (with map), available at the tourist information and bookstore in Hellendoorn and Nijverdal and at the Visitor Center Staatsbosbeheer in Nijverdal.

On various locations near the Eelerberg, north of the sanatorium near Hellendoorn (today nursing home Krönnenzommer), the V2 launching base was installed towards the end of 1944.

On November 14th, 1944, the SS Werferabteilung 500 (launching unit) arrived in Hellendoorn and in Ommen (the hamlet of Archem) and prepared for the launching of V2 rockets mainly to Antwerp. In this way the Germans tried to make the harbor of Antwerp useless to the allied provisioning.

The V2 rockets arrived without explosive charges by night and by train at the railway station of Ommen, very heavily guarded. Then these would be put on trucks and covered up by tarpaulins and carried towards the hamlet of Archem. That is where the explosive charges were installed on the rockets. From Archem the rockets were transported to the Eelerberg during the night and with strict guarding.

- On November 19th, 1944, the first V2 was launched but crashed after a few seconds. The explosion caused a tremendous mass of broken glass in the peoples sanatorium (today Krönnenzommer). That same month another 25 rockets were fired from the Eelerberg.
- On January 1st, 1945, the SS Werferabteilung 500 was moved to Hessum near Dalfsen. From there 32 V2s were launched.
- On January 30, 1945, the SS Werferabteilung moved to mansion de Mataram near Dalfsen. From there 62 V2 rockets were fired towards Antwerp.
- Because of the progress made by the allies and the, in the meantime, conquered bridge near Remagen in Germany on March 17th, 1945, 11 V2s were launched from this base towards the bridge at Remagen. Not a single one of the rockets hit its target but destroyed several houses in the immediate vicinity of the bridge. Six American soldiers died in this bombardment. Ironically, the bridge collapsed the same day.

Finally, on March 28th, 1945, the SS Werferabteilung 500 left Hellendoorn in view of the approaching allied forces.

The text on the information shield can be translated as follows:
"Lest we forget".
This panel is a part of the project that describes all aircraft crashes in the municipality of Hellendoorn during the war of 1940  1945.
For more concise information: see the brochure (with its map), which can be obtained at the VVV (tourist information office) and the bookshops in Hellendoorn and Nijverdal and at the visitors centre of the Staatsbosbeheer (National Forestry Association) in Nijverdal.