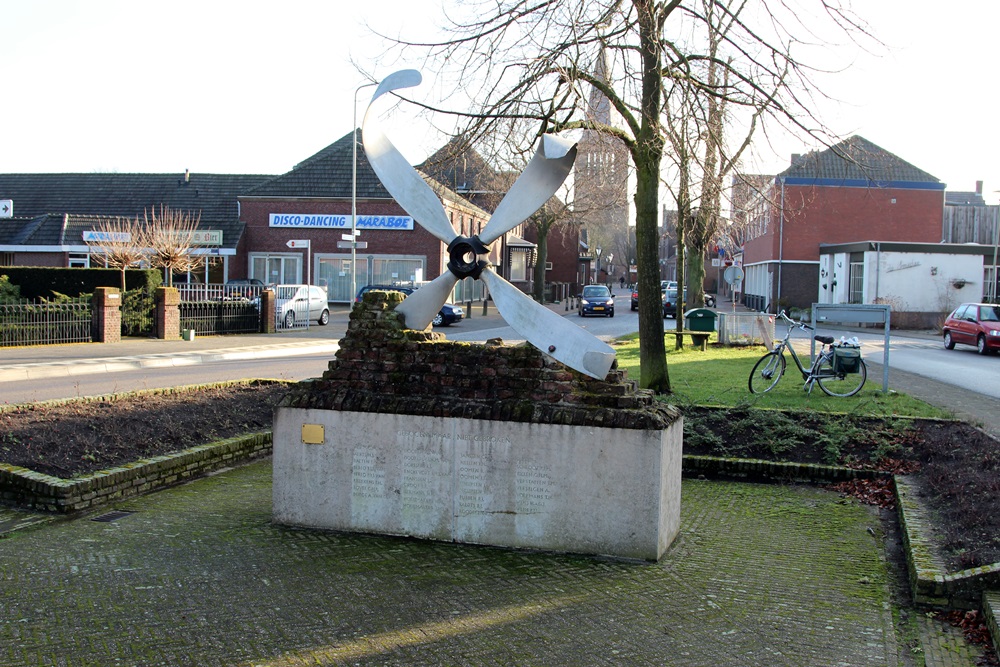 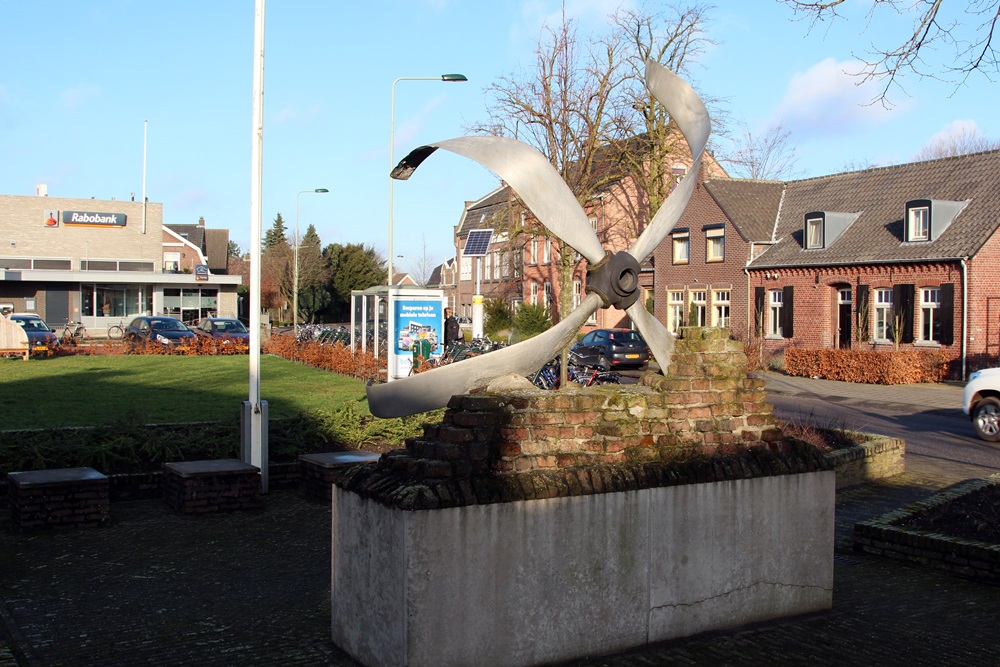 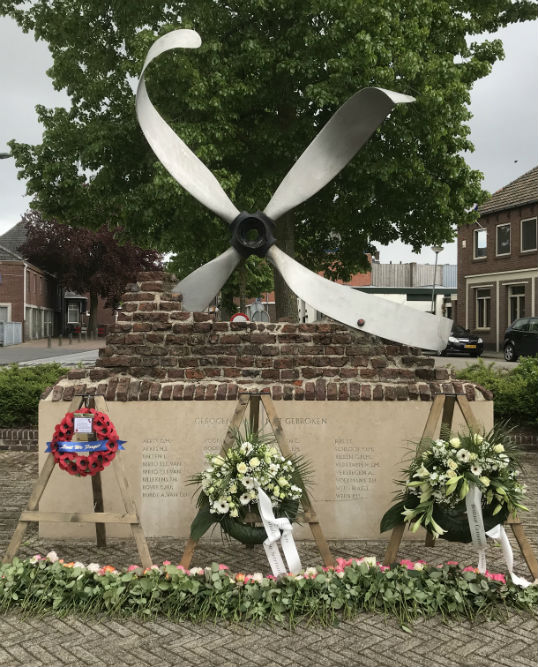 
5000/5000
Tekenlimiet: 5000
The propeller in the memorial was part of the Hawker Typhoon PD477, sign code XM-P with Bill Cuthbertson as pilot. The British Warrant Officer Cuthbertson was assigned to No. 182 Squadron and stationed at Advanced Landing Ground (ALG) B.78, or Eindhoven Airport. The Allies used these airport codes mainly to mislead the Germans. Cuthbertson's No. 182 Squadron flew Hawker Typhoon fighter-bombers. In support of the ground forces in the battle for Sevenum and Horst, the Squadron carried out attacks on ground targets. On October 12, all bridges, means of transport and German troops had to be bombarded in the area. As a result, the Maas villages had a hard time. During the afternoon raid on Horst, Cuthbertson was hit by anti-aircraft guns near Oostrum in his Typhoon PD477.

The bullets not only switched off the engine, the landing gear was also hit and it became clear to the pilot that he could no longer reach his base in Eindhoven. He also flew too low to jump with the help of his parachute. So, flying along the railroad, he tried to reach the English line. That also turned out to be impossible and the aircraft continued to descend towards a potato field. Unfortunately, Cuthbertson's plane hit the tops of the trees along the Kevelaersedijk, then plunged straight down into the ditch along the road and toppled sideways. The pilot jumped out of the aircraft immediately after landing and addressed two spectators a little later. They were Mrs. Bertrams and her daughter Drika. They quickly took him to their farm. By sign language they managed to make it clear to him that he had to hide from the Germans as soon as possible. Fortunately, Bert Jacobs, also known as Mechelen Bert who worked as a farmhand at the Nies, walked in. He rushed Bill to the rectory in Hegelsom, where the pastor hid him in the attic of the community house. Half an hour later, a German soldier came to take a look at the crash location. He chased the curious, but Pilot Cuthbertson had disappeared. From the Hegelian patronage he was brought to De Zwarte Plak, where pilot helper Bert Poels ensured that he could quickly return to his unit in Eindhoven. When a German salvage team came to clean up the wreckage, local residents had already demolished all kinds of parts on and off the plane. The propeller was therefore preserved from the hands of the Germans and is now part of the war memorial in Sevenum.

A villager from Sevenum has cut off a piece of one of the propeller blades with the intention of turning it into a plowshare. This partially sawn off propeller blade was later bricked into the wall of the monument. In those days of the war, everything was lacking and the people were very inventive. (Wies Bertrams said that her sister Truus had found Bill's parachute. However, this parachute was taken from her. parachute for one of the girls from the Kleuskens family for her wedding.

On February 28, 1945 at 08.45 am Squadron Leader Slug Murray took off with six Hawker Typhoon fighter-bombers from Eindhoven for an armed reconnaissance flight to the Bremen-Osnabrück area.
Flight Lieutenant Jack Taylor headed the Blue section. His number 2 was Warrant Officer
Bill Cuthbertson, who himself had been shot down with his plane in Sevenum NL in October of the year before, but had returned to his unit in Eindhoven with the help of the underground. During this reconnaissance flight, they saw a freight train near Bahnhof Drohne. Two aircraft from the Typhoons group carried out an attack on this train in a dive. It was Bill Cuthbertson and Jack Taylor, with the rest of the group covering from above. Suddenly there was a message from Jack - "I got hit". Bill kept circling around Jack to see how his crash landing would go, but he too was hit in the meantime. Both made a successful emergency landing on Bohmter Heide and climbed out of their cockpits unharmed, according to their buddies in the air. They also saw from the air that the train that had come to a stop along the main railway line was equipped with anti-aircraft weapons and that anti-aircraft guns were hidden in the woods around. The hapless Bill Cuthbertson and Jack Taylor were captured and disarmed by members of the Volkssturm fairly soon after the crash. They were then taken to Polizeiposten Bohmte, after which Volkssturmführer F. König decided to kill both pilots. He and Volkssturm member August Bühning, his brother Friedrich and another involved took the two British pilots to a forest near Bohmte and by noon that afternoon they were killed with 8 to 12 pistol shots. The bodies of both pilots were thrown into a hastily dug pit and covered with branches. They later told the Gendaramerieister that they had shot down both pilots during an attempted flight. Jack Taylor and Bill Cuthbertson were later reburied at Neuer Friedhof Lingen. In 1947 they found their permanent resting place at Reichswald Forest War Cemetery in Kleve (D)

The actual perpetrators, Volkssturmführer König and August Bühning, were sentenced to death by the British Occupation Court on December 19, 1945. The judgment for König and for August Bühning was executed by hanging both. For Ortsgruppenleiter Friedrich Bühning and the other accomplice, the earlier death sentence was later commuted to life imprisonment and finally acquittal in 1959.