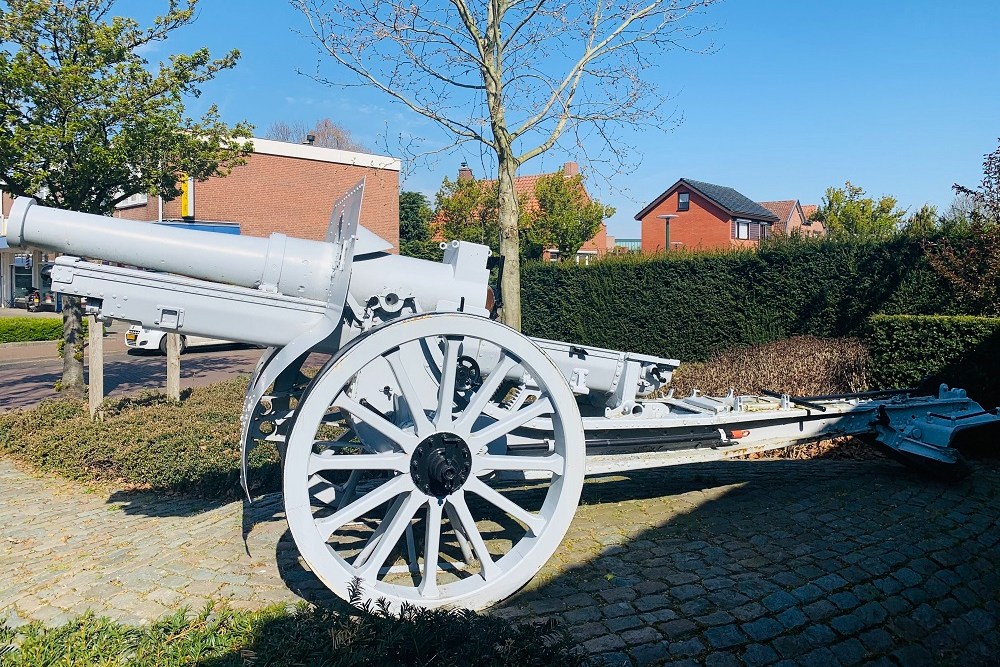 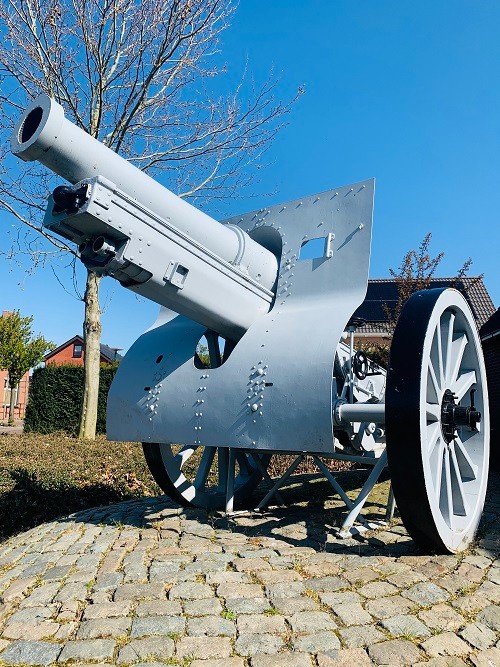 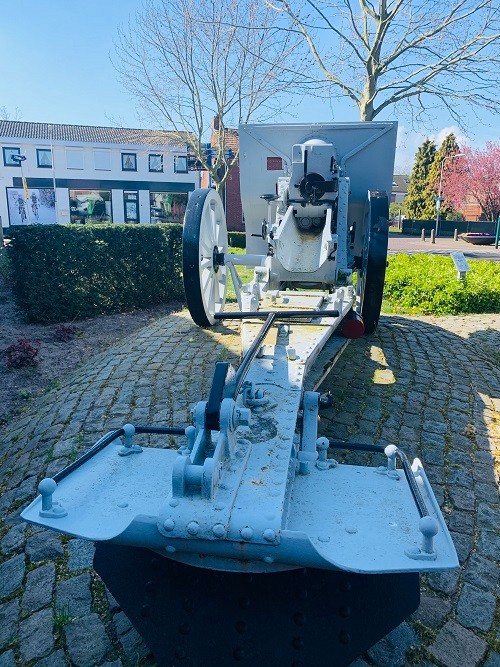 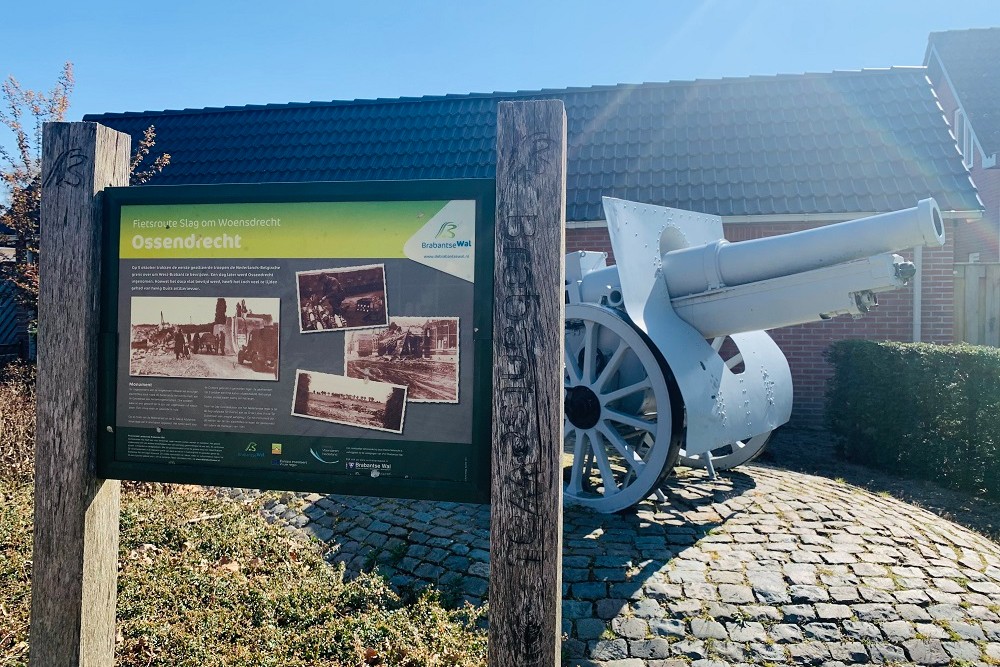 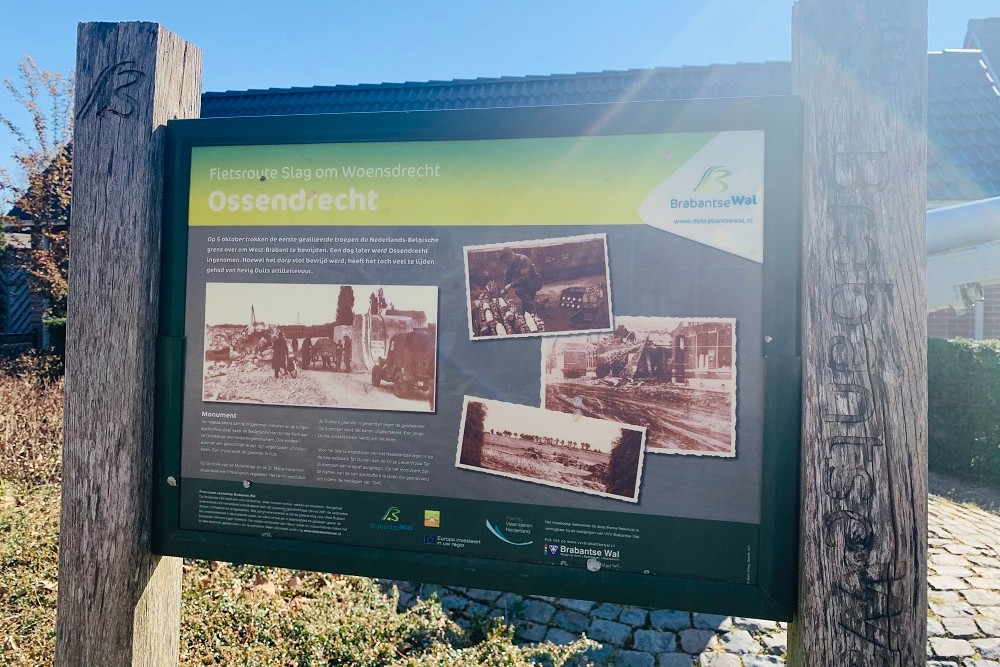 The text on the plaque next to it reads:

Used by the Germans in Ossendrecht.
Destroyed on the 6th of October 1944 at which a young German conscript died.

Overhauled by members of the Koningin Wilhelmina Kazerne.

DISARMING GUN:
At the end of the war, to be precise October 6, 1944, Jac van Dooren was sitting in the living room in the morning when he suddenly heard noise on the street. He looked through the window and saw German soldiers driving down the street with a cannon. He put on his coat in no time and went straight out and followed the Germans inconspicuously with the cannon. This cannon was driven into the Our Lady of the Dunes avenue behind the house of the van den Eijnden Mous family and placed between the house and the river De Heiloop. Jac, who was in the resistance, knew that there were two resistance fighters in hiding with this family van den Eijnden. He knocked on the door and they let him in.
Hidden behind the curtains, the three resistance fighters followed the actions of the Germans by the cannon. They watched the tired-looking soldiers set up the cannon and, to their surprise, they also saw the soldiers get into a vehicle and drive away immediately afterwards. The gun and the 2 machine guns were left unattended by the Germans.
Later it turned out that the soldiers had driven to the pumping station of the water supply for a quick bite to eat and drink.
Jac and his 2 partners immediately took action. Jac, who was a blacksmith by trade, quickly managed to disable the cannon by removing the breech block, after which he carried this heavy block of metal to the somewhat more remote river Heiloop and hid it there in the river.
In the meantime, his two companions had taken the 2 machine guns and the three of them returned to the home of the van den Eijnden family as soon as they could.
In the afternoon the further advance of the Allies followed and the Germans retreated, leaving the broken gun behind, towards Hoogerheide, from which point Ossendrecht was liberated.
On October 7, 1944 Jac went to remove the capstone from the Loopke and stored it in his workshop. When the municipality of Ossendrecht started using the abandoned cannon as a war memorial, Jac informed the municipality that the capstone could be picked up at his home, which was also done.