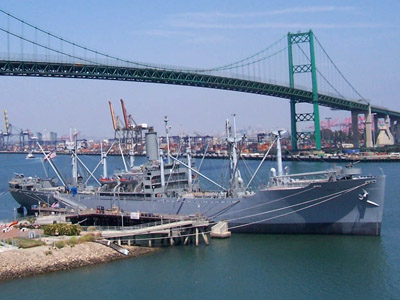 Built in 1945 in Los Angeles, California, the S.S. Lane Victory served with distinction during World War II, The Korean War and the Vietnam War as well as in times of peace as part of the merchant fleet.

After years of deterioration in mothballs, it took countless hours of restoration by volunteers of the United States Merchant Marine Veterans of World War II to put her back into her original condition.

A nationally recognised historic landmark, the S.S. Lane Victory now serves as a living museum and memorial to the service and sacrifices of all merchant marine sailors and Navy Armed Guardsmen.

The ship is regularly used in film and television productions.