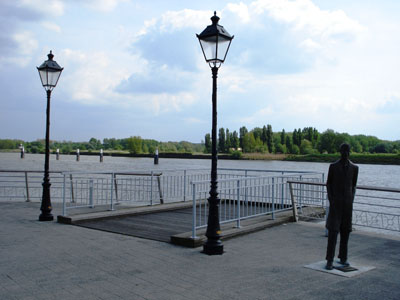 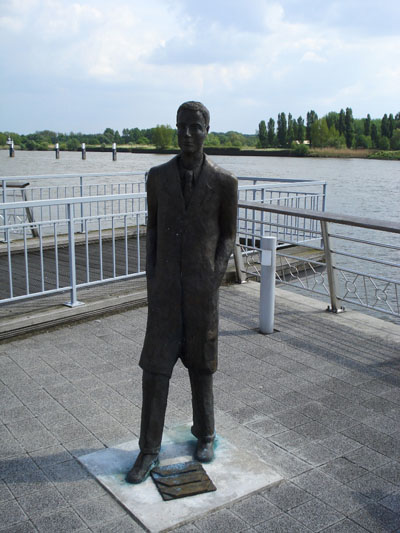 Robert Vekemans (3/2/1913 - 22/10/1998) was a professional lieutenant with the Engineer of the Belgian Army in 1940, after his promotion as military engineer at the Royal Military Academy. In October 1940 he was released early from German captivity to be deployed in the reconstruction in Belgium at the study service of the Antwerp Marine Services, a department of the Administration of bridges and roads.

On September 4, 1944, the German armies were in full retreat after the Allied invasion of Normandy, pursued by the British 11th Armored Division, which was targeted at the capture of Antwerp.

Robert Vekemans knows the strategic importance of the port of Antwerp, he also knows that the Germans are preparing to thoroughly destroy the port installations. He suspects that the Allied advance will lead through Boom and that the destruction of the bridges over the canal and the Rupel near Boom could delay this advance enough to give the Germans time to carry out their destruction plans.

At Vekemans, the plan is growing to persuade the British advancing from Brussels to deviate from their planned direction. They can protect the vital but heavily guarded and undermined large bridge over the Rupel from destruction by crossing the Rupel along an old and less guarded toll bridge, the Widow Van Enschodt Bridge, between Klein-Willebroek and Boom and the German positions on to attack the large boulevard bridge in Boom from behind.
On Monday, September 4, 1944 at 08:35 am, Vekemans manages to halt the column of the British "3th Battalion Royal Tank Regiment" at Fort Breendonk and makes his plan clear to the astonished British.

Lieutenant Colonel David Silvertop decides to have the audacious circumference move performed. Vekemans gets into a small reconnaissance car and receives three Sherman tanks. They then drive through the center of WIllebroek and along the canal to Klein-Willebroek.

At 9:35 am Vekemans and the three British tanks drive over the undermined but still intact wooden toll bridge. Vekemans now leads the tanks through the deserted streets of Boom to the ramp of the great Rupel Bridge.
The defenders are shot in the back and are completely surprised. After some weak defense, the Germans surrender. There are only some minor injuries. Boom resistance fighters help to capture Germans who are still in the area. Vekemans goes to the prisoners of war and forces a German non-commissioned officer to neutralize the explosive charges under the great Rupel bridge. The other tanks soon appear and occupy the vital ruins in Boom. The boulevard bridge over Rupel was captured undamaged.

With Vekemans as guide on the Silvertop tank, the rush to Antwerp continues. The German defenders on the outskirts of the city are taken by surprise after brief skirmishes. That same day, just after 2 pm, the British tanks and the half-tracks of the accompanying infantry are already triumphantly driving along the Antwerp avenues, greeted by a frenzied crowd.

In war history, a personal initiative like that of Robert Vekemans has seldom been crowned with so much success. His actions on the bridges in Boom resulted in the intact conquest, by the British and Antwerp resistance, of the strategically important port installations in Antwerp and in this way had a profound effect on the further course of the war.

After the war, the toll bridge, damaged and obsolete in 1945, was demolished. Parts of it served as an emergency bridge over the Maas in Huy for a while, after which it disappeared to the scrap heap. The pillars of the bridge remained in the river until 1986.