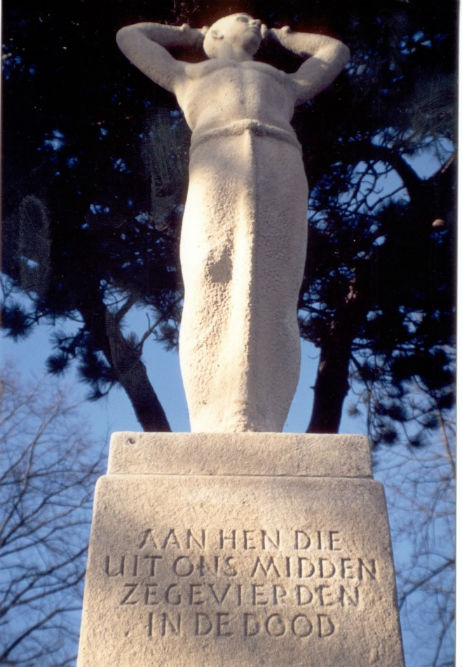 This memorial commemorates the residents of Beverwijk who were killed in World War II.

The idea of ​​a permanent memorial monument in Beverwijk arose in the summer of 1945. The image was to become an image for all killed residents, fallen soldiers, murdered resistance fighter, victims of the concentration camps, forced laborers and other civilian victims. It had to be a gift from the residents to the municipal council. Prominent formed a committee and looked for opportunities for the necessary finances. Since there was still a shortage of everything after the liberation, this went very slowly. When the necessary amount was collected, an artist and a suitable location were searched for. Finding an artist was no problem. The choice fell on Gerrit Bolhuis. However, finding a suitable location for the monument presented more problems. The Stationsplein, the most obvious location, soon fell off. In addition to the nuisance caused by parked cars, an increase in traffic was expected. This feared an increase in noise and crowds. One had to be able to commemorate in peace and quiet. For a moment the Duinrust cemetery was still visible. The disadvantage here was the distance from the built-up area. Finally, the municipal council decided to construct Westerhoutplein for this purpose. Westerhoutplein was constructed in consultation with the artist Bolhuis. According to the artist, the sculpture came into its own at this location. A young man, a symbolic figure with a bare torso. Hands tied above his head. However, the ropes have been cut and his face. The monument is to proclaim the victory over death. On the evening of May 4, 1949, Mrs. Büller-van der Wal reveal the statue. Her husband was shot dead in his home by two Dutch SS men on April 9, 1944. The disadvantage is that the monument was carved out of French limestone, so the weather influences have left their mark over the years.