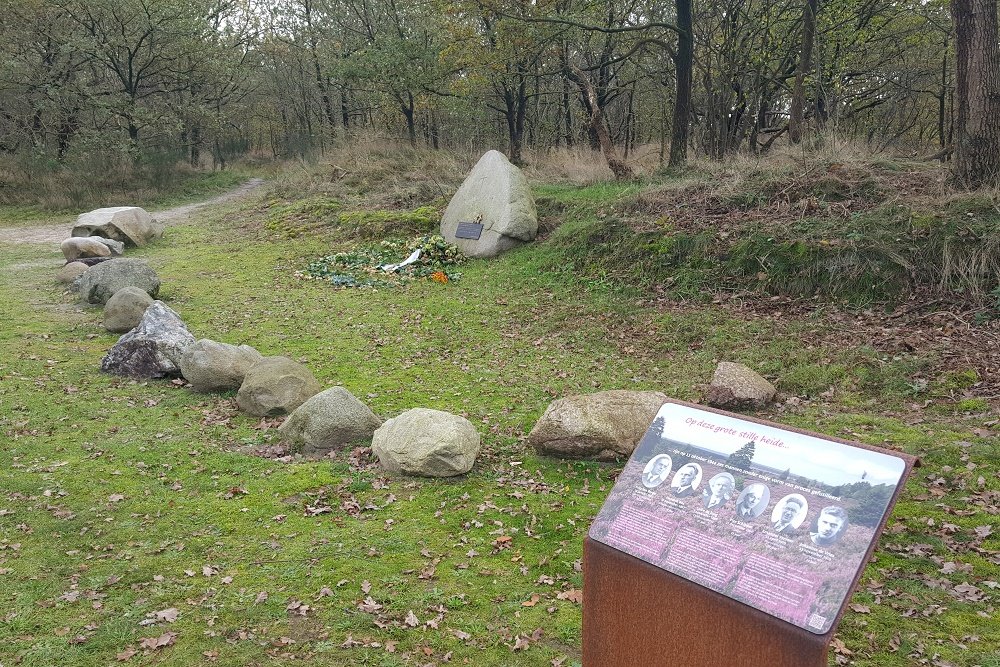 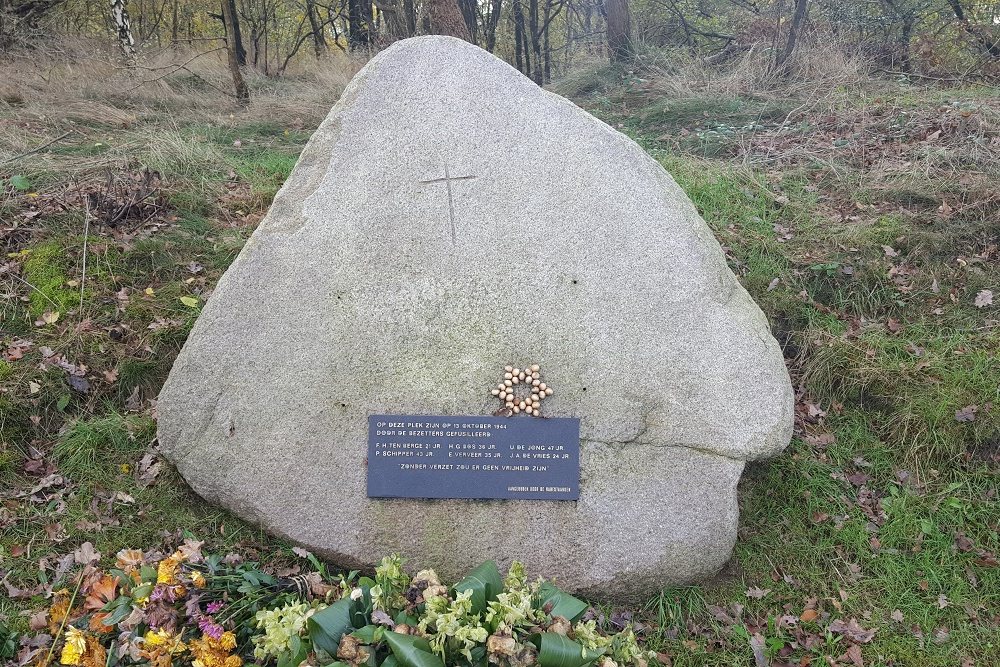 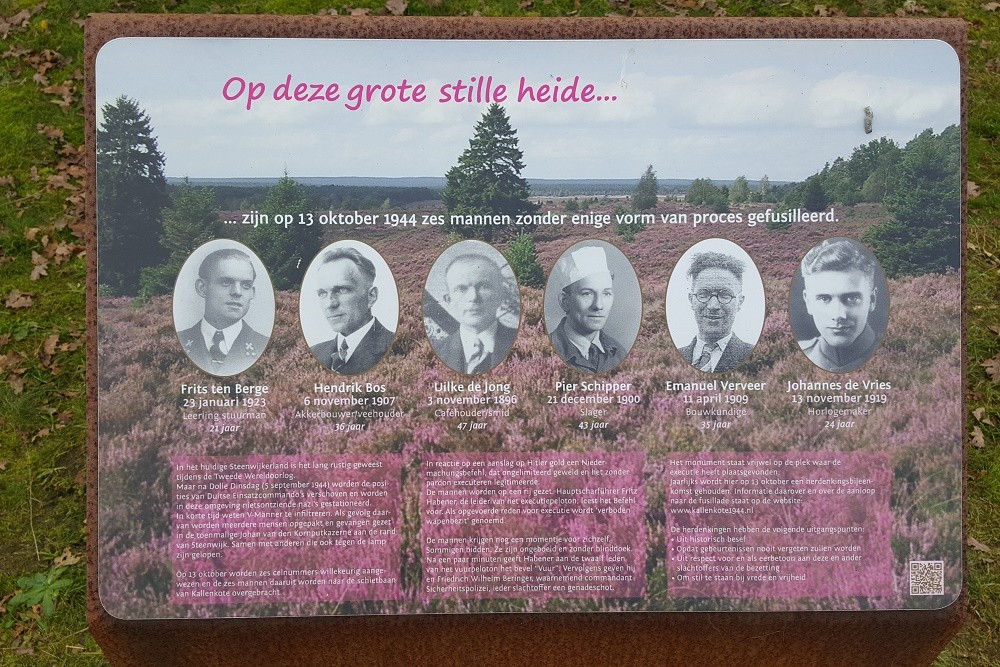 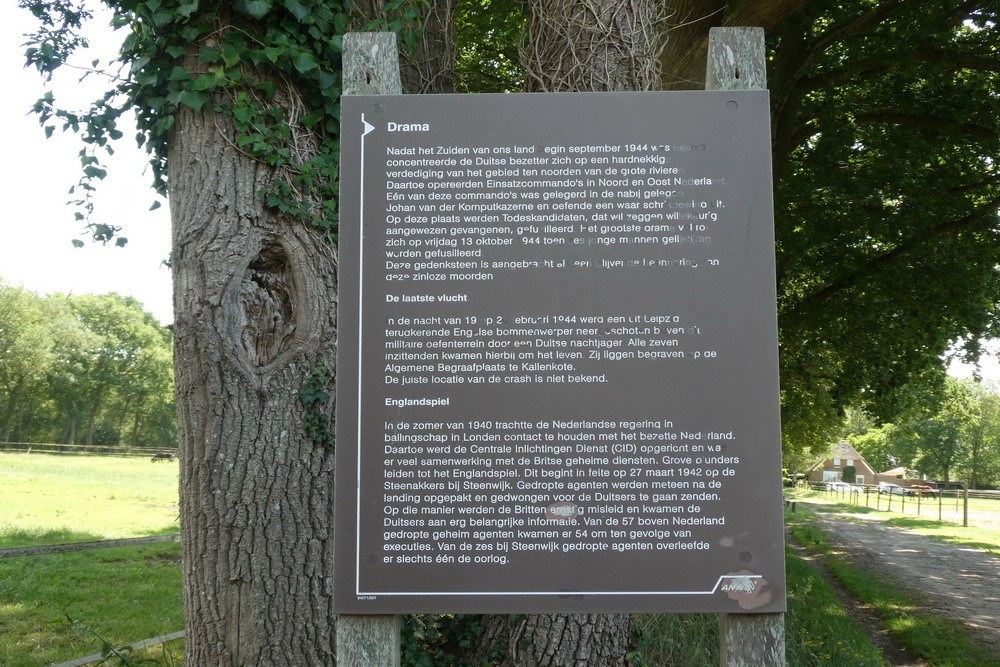 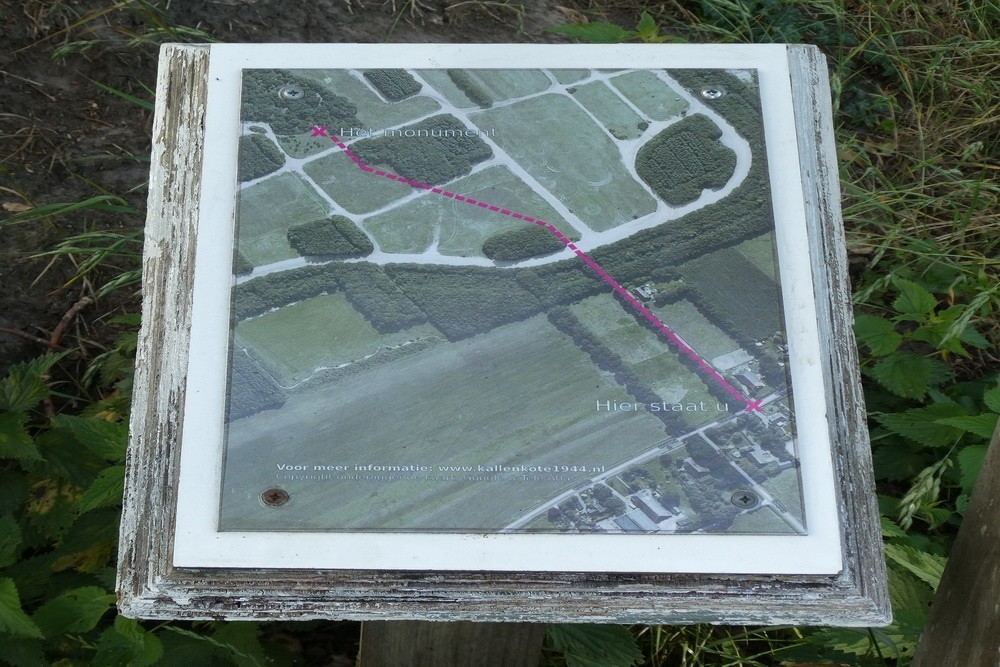 On this site, a former shooting range in the forest area, on October 13, 1944, six Resistance people were executed without trial by the Germans.

The monument is accessible via an unpaved, but easily accessible path, the entrance of which is located at Kallenkote 68 in Kallenkote.

Background information:
The further the Allies advanced, the more repressive the regime of the Germans, especially after parts south of the great rivers were liberated.
Germans from special anti-terrorist units, later known as the infamous Einsatzkommandos, settled mainly in the north and east of the Netherlands with the actual task of guarding the IJssel line.
In the municipality of Steenwijkerland, a split-off consisting of approximately 20 members of the Heerenveense division settled in the Johan van den Kornput barracks in Steenwijk under the leadership of SS-Hauptsturmführer Kurt Stiller on 10-09-1944, with SD Hauptscharführer Fritz Habener in his wake.

Until that moment, the war in this part of the Kop van Overijssel had been relatively peaceful, but with the arrival of this command everything changed dramatically and would result in the death of nine people.

Six of them were executed simultaneously on 13-10-1944 at the military shooting range in a forest area belonging to the village of Kallenkote, directly under the smoke of Steenwijk.

This tragedy already started on 04-10-1944 with a raid in which just under 600 men were herded together on the Markt in Steenwijk for employment at the nearby airport of Havelte.
Johannes de Vries and his future brother-in-law Frits ten Berge were advised by their father (in law) A. de Vries to go into hiding with the H. Bos family, living in the village of Steenwijkerwold.

Then 10-10-1944 a trap was set up for Pier Schipper, a butcher in Steenwijk, by two men who pretended to be members of the underground with the question whether food could be obtained for people in hiding.
At that time, Schipper's brother-in-law, Uilke de Jong, who had gone into hiding there, was also present who turned out not to have an identity card on which one of the visitors filled in a blank pedigree card in his name with the promise that the identity card would be received quickly.
The day after, however, a raid led by Fritz Habener followed, in which both men, as well as Schipper's wife, were arrested and taken to the Johan van den Kornput barracks.

Also on 11-10-1944 the Germans invaded the farm of the H. Bos family in Steenwijkerwold, where Johannes de Vries and Frits ten Berge were arrested, they were also locked up in the Johan van den Kornput barracks, the same fate awaited farmer Hendrik Bos a day later, once again Fritz Habener was the leader.

Emanuel Verveer had previously been imprisoned in the Johan van den Kornput barracks, Fritz Habener accused him of working for the Wehrmacht as a technical engineer in the service of a Dutch company.
When he was arrested by the Zollgrenzschutz in Zwartsluis, it turned out that he had secret notes from the IJssel theorem with him.
Together with the fact that he was a Jewish person in hiding, this irrevocably placed him on a death sentence.

There are only (contradictory) statements from those responsible for the mass execution that took place on Friday 13-10-1944, so that the exact events and cause can never be traced exactly.
It is certain that that day six cell numbers were selected at random and Fritz Habener transported the prisoners to the shooting range of Kallenkote.
After reading the so-called Niedermachungsbefehl by Hans Albin Rauter and stating "Forbidden Possession of Weapons" as an official indictment, Fritz Habener ordered the firing squad of approximately twelve people to be executed.

Jan Hendrik van Dalen, a farmer from Kallenkote, was ordered by the Germans during the loading of potatoes on his wagon shortly after the massacre to collect the remains and take them to the village cemetery, refusing was not an option ...

A few days before the liberation of the region, on April 10, 1945, after the landing of 150 French paratroopers, Fritz Habener was directed to Diever in Drenthe, where he was confronted with the news that the Ortskommandant stationed there had been murdered.
In blind rage he took eleven people hostage, of which he later in the day executed 10 independently with his submachine gun, as if by a miracle the last victim managed to escape the bullets.
After the war and before he could be tried in the Netherlands, a request for extradition came from France because he had been labeled a war criminal by the UNWCC. This request was complied with.
Until September 1944, Fritz Habener had signed an immense reign of terror around La Madeleine-lez-Lille and on this basis six charges were formulated against him.
Five of them were declared well-founded and on December 9, 1950 the death penalty was pronounced against him, which after three rejected cassation requests, was actually carried out on September 30, 1950 in the Fort de Pontessy near Lyon.