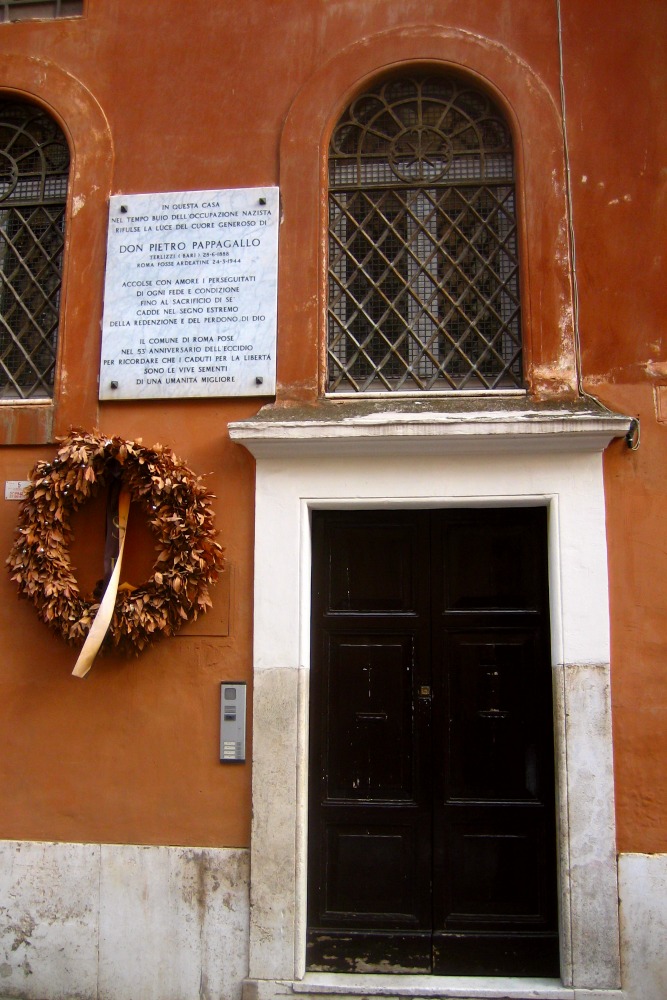 This plaque commemorates Don Pietro Pappagallo, an Italian anti-fascist and one of the victims of the Fosse Ardeatine massacre on 24 March 1944.

Don Pietro Pappagallo moved to Rome in 1925 and was an active member of the clergy there. During the German oocupation he was part of the resistance, assisting people wanted by the Reich, including partisans, soldiers, allies and Jews. Among other things, he produced false papers for people needing them. He was arrested and held for 2 months in prison, where he continued to offer spiritual comfort and food to fellow prisoners. Then, on the afternoon of 24 March, he and 4 others were taken by truck to the Fosse Ardeatine. He was the only priest among the 335 executed in retaliation for the death of 33 Germans killed in a partisan attack the previous day.

In 1998, the Italian President awarded Don Pietro Pappagallo posthumously the Medaglia d'oro al merito civile (Gold medal for civil merit). "As a priest of the Diocese of Rome, during the German occupation he worked zealously in the clandestine struggle and gave himself generously to aid Jews, deserters, anti-fascists and allies in flight, helping them hide and refresh themselves. Betrayed, he was handed over to the Germans, sacrificing his life with serenity of soul, a sign of the faith that had always lighted his way."

Translation of the plaque on the wall is:

In this house in the dark time of the Nazi occupation there shone the light of the generous heart of Don Pietro Pappagallo.
Terlizzi (Bari) 28-6-1888
Rome Ardeatine Caves 24-3-1944
He received with love the persecuted of every faith and condition until the sacrifice of his own self. He fell in the ultimate sign of redemption and the forgiveness of god.
The city of Rome on the 53rd anniversary of the massacre remembers that those who died for freedom are the living seeds of a better humanity.