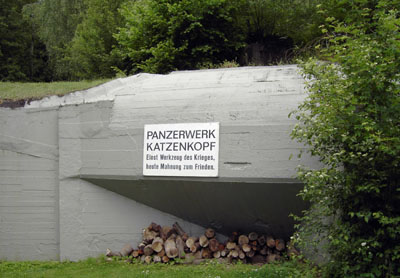 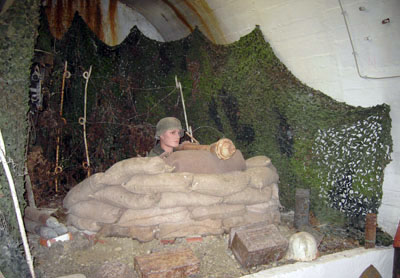 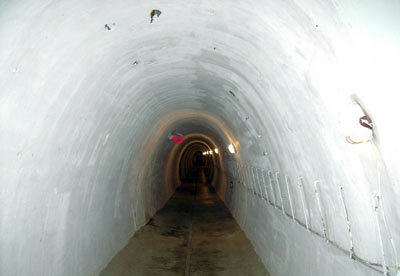 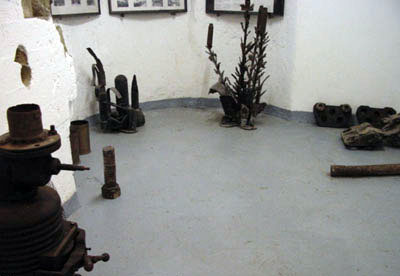 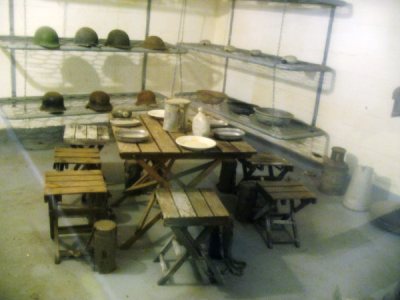 For the protection of ist territory, Germany started in the year the 1936 (officially in 1938) the construction of an enormous fortified line along its western borders. This line reached from the border-area of Basel (Switzerland) up to Kleve (Germany, lower Rhine area) and was 630 km long. They called it the "Westwall".
Of the 22.000 forts, bunkers and pillboxes planned, 14.800 were constructed, among them 32 forts of the type "B", with 2m thick concrete walls.
At Irrel, 2 forts of this type, the "Katzenkopf" and the "Nimsberg", were built as northern stronghold of the "Westwall", tasked to secure the important Road-axis Luxembourg - Cologne.

Both of the upper floors were originally divided into 45 rooms of varied sizes. These were the troop quarters for the crew of 84, guard rooms, gunnery rooms, first-aid station, lavatories, ammunition supply, cold storage chamber, canteen, kitchen, as well as telephone control and radio station.
More than 60 electric motors for the ventilation system, the water pump, the heating and the lighting were supplied by electricity produced by two diesel-engine generators.
The fort itself and ist immediate area could be defended by several firing positions to include two gun-turrets with 6 firing- holes for 2 sMG34 each, a 50mm grenade-thrower and a flamethrower. The artillery and infantry watch turret was used for the all'round observation and the shooting commands.
On the fourth and deepest floor are two large galleries totalling 138m of length. One leads to the water pump room installed over a 180 meter deep well, the other to the remote gun-turret.

The "Katzenkopf" (1937 - 1939) was the second largest and northernmost positioned fort of its kind and is today the one still visitable "B-Werk" of the entire line in Germany. Since 1979 in its preserved interior parts it hosts the "Westwallmuseum" with an interesting collection of World War II weapons and photos.
During the French occupation in 1947 it was heavily damaged by dismantling actions. In 1976 a group of local volunteers of the fire service dug out the remnants and started its preservation
On the upright standing concrete remains of its former roof, a memorial stands dedicated to the 4000 dead and missing soldiers of the 39th Füsilier-Regiment of Düsseldorf.
All activities are voluntarily done by the members of the local fire service who spent about 58,000 hours of work by now.