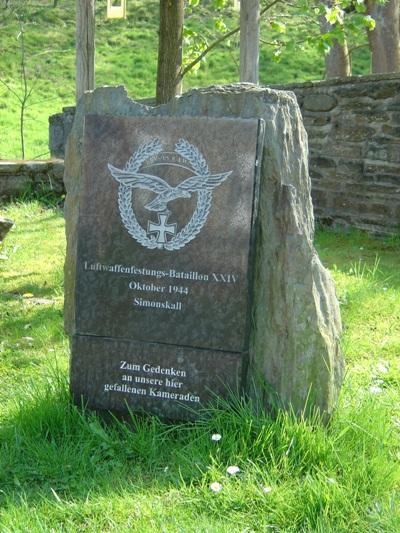 On Nov. 16, 2002 family members of the Luftwaffenfestungs-Batallion
(Air Force Battalion) XXIV have erected a Memorial Stone in Simonskall
at the boundary wall of the Kall River between the House of Guest and the
Kremer Mühle (Cremer Mill).

Several of these squads have participated in Hürtgenwald battles. These soldiers were mostly only 17 or 18 years of age. Although they had been trained for military service in the air force, they nevertheless had been sent to ground battles as infantry men. They as well as their commanders were overcharged with the requirements expected from them. They had been appointed as reserve armies for the infantry divisions worn out in battles of attrition. In some cases their braveness has been honourably mentioned but actually they have been used as cannon fodder.

In October, the total number of the battalion had been reduced from 640 to 130 within eight days. After their withdrawal on Nov. 4, they had become once more considerably reduced.