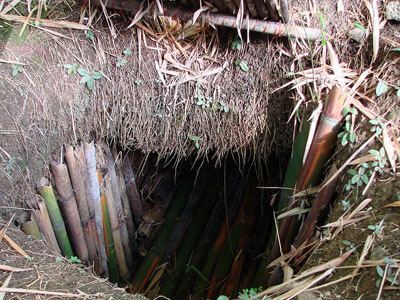 The Japanese corporal Shoichi Yokoi lived in this shelter for 28 years without knowing World War II has ended. He arrived on Guam in 1943 and fought the Americans during the Battle of Guam. Eventually he went into hiding, while the U.S. army was clearing the last Japanese resistance on the island. On 24 January 1972, two local fishermen managed to subdue him and carried him out of the jungle. Yokoi went back to Japan and was welcomed by the Japanese people as a national hero. He died on 22 September 1997 in Nagayo. He was 82 years old.

Today, a replica of his hideout is a populair tourist attraction. The original was destroyed in a typhoon.