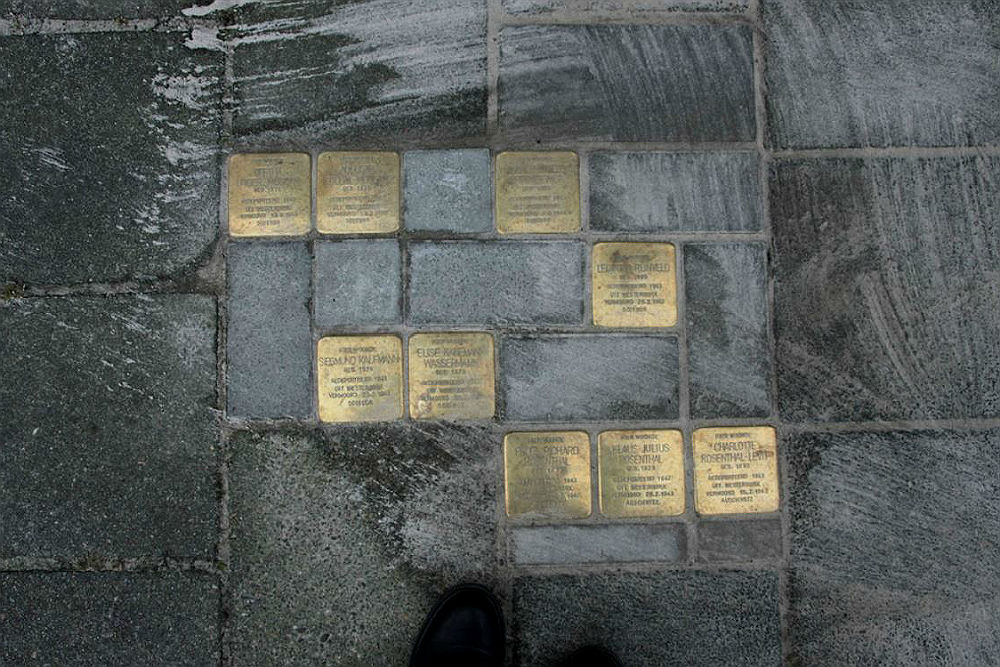 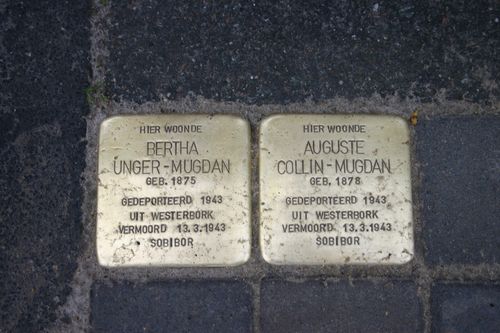 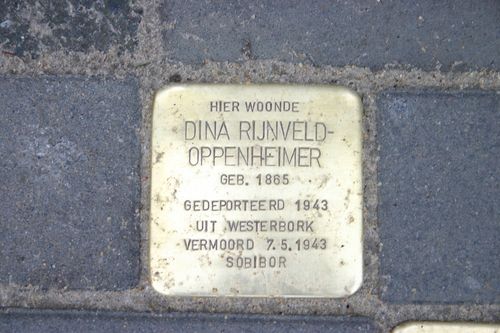 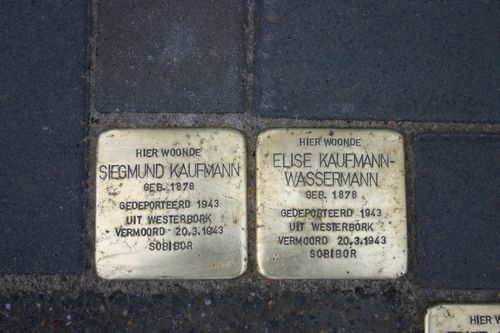 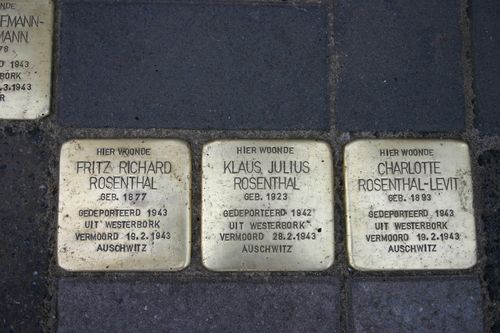 Bertha Unger-Mugdan and Auguste Collin-Mugdan were sisters whose husbands had died before the war. Their children emigrated to America. Bertha and Auguste managed to get on a ship to Cuba in May 1939. Sadly, it was the St. Louis, whose passengers were refused asylum in Cuba and in America. The St. Louis returned to Europe, and the sisters were among 181 passengers given refuge in the Netherlands. They survived there until their arrival at Sobibor death camp in March 1943.

Dina Oppenheimer and Eliezer Rijnveld married and ran a manufacturing business. When Eliezer Rijnveld died, Dina took over the business. Their son, Leopold Rijnveld, studied classical languages at the University of Amsterdam and passed his doctoral exam in 1933, but he could not write his thesis due to persecution of Jewish people. He taught classical languages and ancient history at government secondary schools until 1940 when the Nazis fired all Jewish teachers. Living in Groningen with his mother, he then taught in the Jewish Lyceum in Groningen until his deportation to Westerbork on 11 March 1943. Twelve days later, he was deported again  this time to Sobibor, where he was murdered on arrival.

Dina Rijnveld-Oppenheimer was ailing from the beginning of 1943. The deportation of her son must have been devastating. She was in hospital the next month when she herself was deported to Westerbork on 29 April 1943. Then she was deported again on 4 May and murdered on arrival at Sobibor. She was 78.


Siegfried Kaufmann, a salesman, and Elise Wassermann maried in 1904, and the following year they had a son, Jakob Robert Kaufmann. Little is known of their lives before World War 2. In 1934, Jakob, then age 29, moved to Amsterdam. His parents left for the Netherlands in the winter of 1937-1938 and settled in Groningen. In 1941, they moved into the house here at Wassenberghstraat 24, joining other German-Jewish refugees. On 9 March 1943, Siegfried and Elise were deported to Westerbork transit camp where both were put in the hospital barracks. Eight days later, both were deported on a 3-day journey to Sobibor death camp, where they were murdered on arrival. Their son had been murdered the previous summer in Auschwitz.


Fritz Richard Rosenthal was a Jewish real estate agent in Berlin who had to give up his business. With his wife Charlotte Rosenthal-Levit he moved to the Netherlands in 1935 and became the owner of the Hotel Kiet in Groningen. They had a son, Klaus Julius Rosenthal. At some point, the Mugdan sisters lived in the hotel. After the Nazi occupation, he had to give up the hotel, and in August 1940 he, Charlotte, and the Mugdan sisters moved to Wassenberghstraat 24. He started a new business there, running a boarding house. Frtizs status as a WWI veteran did not protect him. He and Charlotte were taken to Westerbork on 28 November 1942, deported from there in early 1943, and murdered in Auschwitz on the same February day. Documents are inconsistent regarding where their son Klaus Julius Rosenthal was deported from  Berlin or Westerbork  but consistent that he was murdered in Auschwitz at age 19.


"Stolpersteine" is an art project for Europe by Gunter Demnig to commemorate victims of National Socialism (Nazism). Stolpersteine (stumbling stones) are small, 10x10cm brass plaques placed in the pavement in front of the last voluntary residence of (mostly Jewish) victims who were murdered by the Nazis. Each plaque is engraved with the victims name, date of birth, and place (mostly a concentration camp) and date of death. By doing this, Gunter Demnig gives an individual memorial to each victim. One stone, one name, one person. He cites the Talmud: "A human being is forgotten only when his or her name is forgotten."