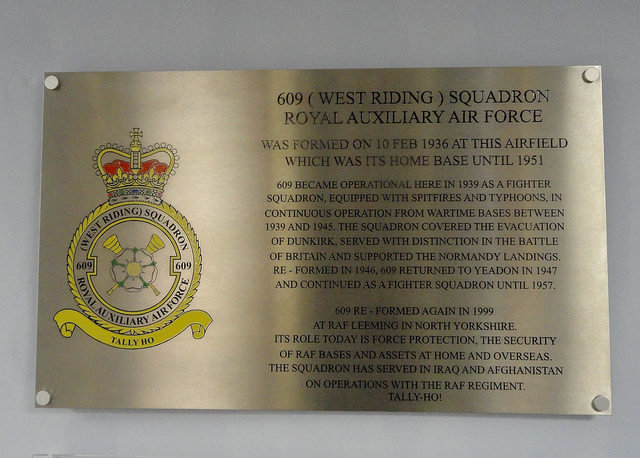 Text on the plaque, in the terminal building of Leeds-Bradford Airport:
609 (West Riding) Squadron Royal Auxiliary Air Force was formed on 10 Feb 1936 at this airfield which was its home base until 1951.
609 became operational here in 1939 as a fighter squadron, equipped with Spitfires and Typhoons, in continuous operation from wartime bases between 1939 and 1945. The squadron covered the evacuation of Dunkirk, served with distinction in the battle of Britain and supported the Normandy landings. Re-formed in 1946, 609 returned to Yeadon in 1947 and continued as a fighter squadron until 1957.
609 re-formed again in 1999 at RAF Leeming in North Yorkshire. Its role today is force protection, the security of RAF bases and assets at home and overseas. The squadron has served in Iraq and Afghanistan in operations with the RAF Regiment. Tally-ho!