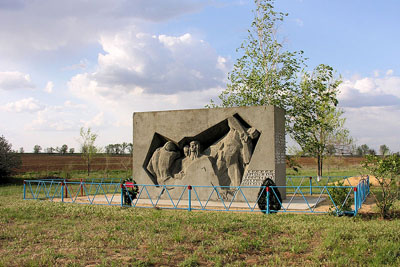 Near the village of Novaya Nadezhda is a collective grave with the remains of the KV-heavy tank crew, who died in action on 21 January 1943. They were all posthumous granted the title "Hero of the Soviet Union".

According to the recommendation in a fight on 21-01-1943 the crew fearlessly annihilated manpower and machines of the enemy. In total 5 bunkers with officers and up to 120 soldiers, 5 enemy tanks, 24 (armored) vehicles, 19 artillery pieces and mortars and 15 machine gun positions in a 5-hours constant battle until it was hit by a shell and lost it's maneuvering ability. Even after it was stranded, the tank fired all the ammunition it had. The Germans surrounded the tank and poured gasoline over the tank, demanding the crew to surrender. The crew refused and were burned alive.