Introduction
The Roman Catholic churchyard at the Kloosterweg in Brielle provides a place for a war grave of the Commonwealth. It concerns the grave of Seaman John Thomas Cook DSM of the Royal Naval Reserve (Patrol Service). As a result of the somewhat unclear data of the Commonwealth War Graves Commission, the grave is a bit difficult to locate. Also the widow and children of Seaman Cook for a long time were not aware where their husband and father had been buried. Their husband and father perished when his ship, HMS Cayton Wyke, had been sunk off the coast of Kent.

ASW Trawler.
HMS Cayton Wyke was launched on June 20th 1932 after the ship had been built by Cochrane & Sons Shipbuilders in Selsby, England. It had originally been built as a fishing trawler. Many trawlers were requisitioned by the Royal Navy during both the First and the Second World War, reconfigured into warships and used as minesweepers. The crews of these ships often were derived from the volunteer reserve of the Royal Navy and were familiar with this type of boats. Cayton Wyke also became requisitioned in August 1939 by the admiralty and deployed as an ASW ship (Anti Submarine Warfare). Therefore it was amongst others equipped with depth charges.

The ship received a crew of 18 under the command of 48 year old skipper David Noble from Aberdeen.The other crewmembers were:

48 Year old Noble was the oldest man onboard while Keable with 19 years was the youngest crewmember.

U 16 and Dunkirk.
On 24 October 1939 HMS Cayton Wyke was patrolling the English Channel when Seaman Cook in the position of Anti Submarine Detector Operator discovered the presence of the German submarine U 16. The U 16 belonged to the 3.Unterseebootflotille in Kiel and had sailed six days before, for the third time, in order to lay mines along the coast at Dover. Cayton Wyke made contact with HMS Puffin which was also in the vicinity. Together they started to chase the U 16. Close to the sandbank of Goodwin Sands near Kent the submarine was harassed with depth charges and got seriously damaged. The U 16 succeeded in escaping to the sandbank, but at 04:15 in the morning of October 25, she reported to headquarters: "Ship heavily damaged in front of Dover. Has to be scuttled." For their participation in this feat Skipper Noble and Seaman Cook were awarded The Distinguished Service Cross and The Distinguished Service Medal respectively.

In May 1940, HMS Cayton Wyke was commissioned during operation Dynamo, the evacuation of the British Expeditionary Forces from Dunkirk. On May 31 the ship succeeded in evacuating 605 soldiers from the French coast and delivering them safely to England.

Going down.
On Monday 8 July, 1940, HMS Cayton Wyke sailed off the coast of Essex during a patrol. When the heading was set towards Dover the ship passed the spot where it sank the U 16 about ten months earlier. Exactly at that moment of time Cayton Wyke was hit by a torpedo at its portside. It had been fired by a German submarine and caused an enormous explosion. The trawler capsized, sank immediately and ended up upside down on the bottom of Goodwin Sands. All eighteen crew perished through the explosion. The wreckages of the U 16 and Cayton Wyke are positioned only a few hundred yards apart from each other.

Two days later the relatives of the crew received the message about the Missing in Action of their family members. All eighteen men were registered as "Missing, believed killed in action." On the spot of the disaster no bodies were found.

Aftermath.
Ignorant about the exact fate of their husbands the widows of Skipper Noble and Seaman Cook received a few weeks later the awards for their husbands from King George VI. At that time still no bodies had been found.

It is not known when exactly, but the bodies of William McLeod and William Dickson washed ashore at the beach at Noordwijk. They have been buried at the General Graveyard in that village. The body of John Cook washed ashore at Oostvoorne and was found by the inhabitants of that place. They buried him in a field near the village. After the liberation (in 1945) he has been reburied at the Roman Catholic Churchyard of Brielle at the Kloosterweg.

The other fifteen crewmembers do not have a known grave. Their bodies have never been found or identified. The name of Ordinary Signalman Samuel Gilmore can be found, together with 18.614 names of other missing seamen, on the Naval Memorial in Chatham, Kent. The other men that perished at the sinking of the Cayton Wyke are mentioned on the monument for missing members of the Royal Naval Patrol Service in Lowestoft. Among them Russel Keable originating from Lowestoft.

Commonwealth
Intergovernmental organisation of independent states in the former British Empire. A bomber crew could include an English pilot, a Welsh navigator, air gunners from Australia or New Zealand. There were also non-commonwealth Poles and Czechs in Bomber Command.
front
Largest Soviet ground formation. It was attached to a certain area which gave its name to the units involved. For instance the Voronezh front.
torpedo
A weapon of war. A cigar shaped body fitted with explosives and a propulsion and control mechanism. Intended to target after launch a nearby enemy ship and disable it by underwater explosion.

An ASW trawler, in this case HMS Bedfordshire Source: U-boat.net. 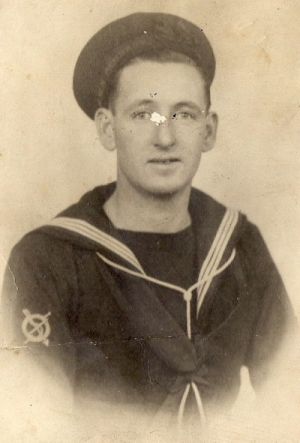 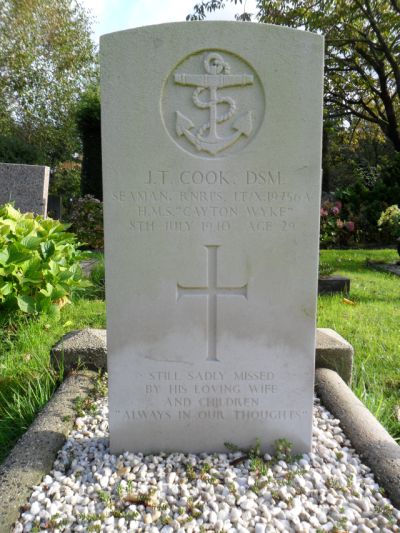 The grave of Cook in Brielle Source: Pieter Schlebaum. 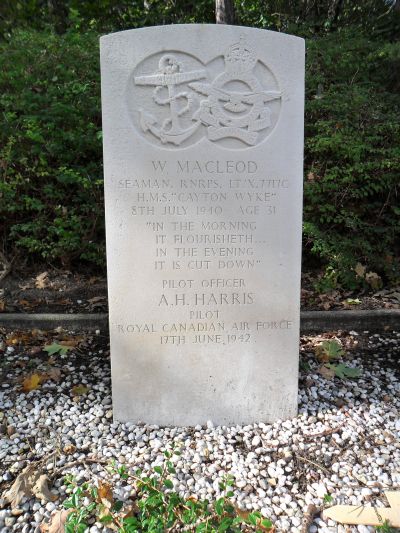 The grave of McLeod in Noordwijk Source: Pieter Schlebaum. 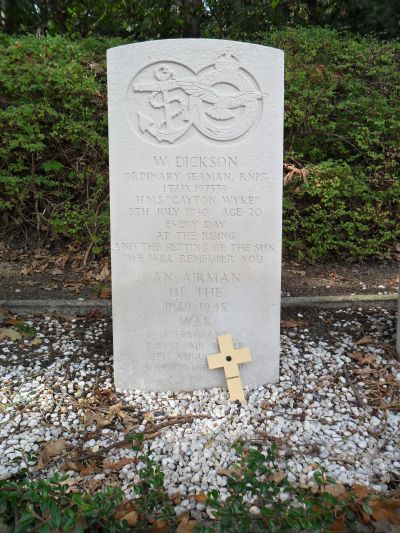 Dickson has also been buried in Noordwijk Source: Pieter Schlebaum. 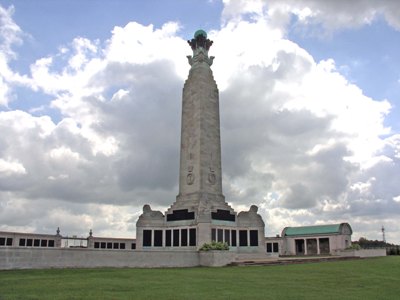 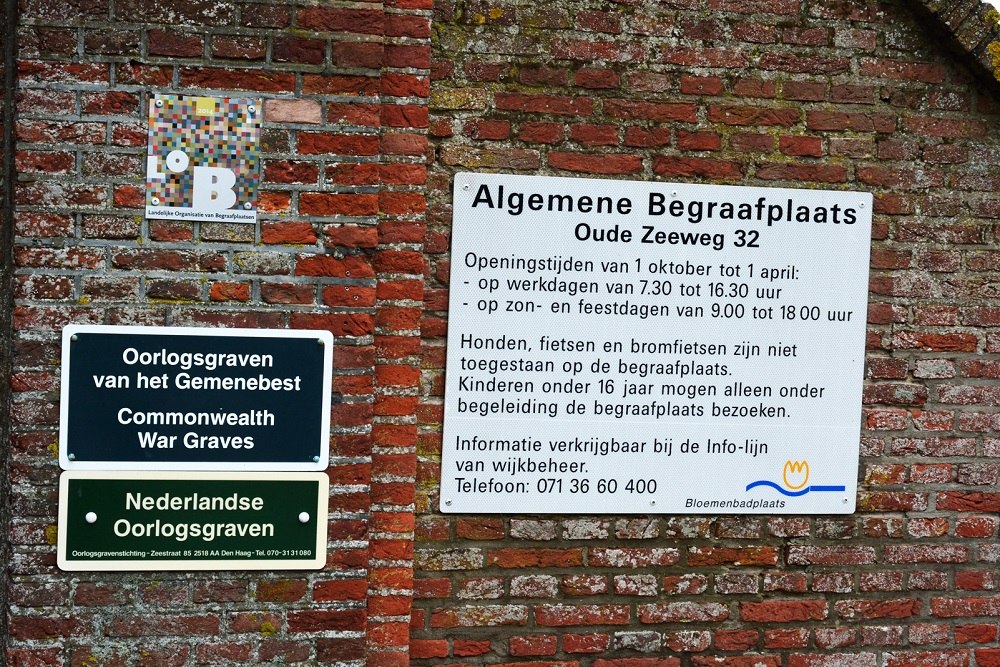 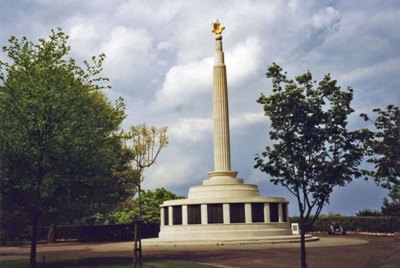 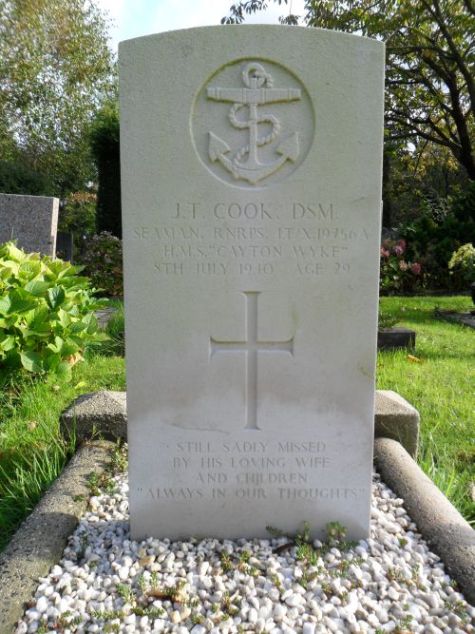 With special thanks to John Garth Cook, son of Seaman John Cook, for providing information about his father and HMS Cayton Wyke.
- Commonwealth War Graves Commission
- HMS Cayton Wyke
- U-16