After the capitulation of the Netherlands, the Dutch officers had to sign a declaration of honor. With this declaration they indicated that they would take no action against the occupier. Most officers signed this declaration, often with the idea that they didnt have to keep their word to the occupier. A dozen officers did not sign the declaration, as a result they spent the rest of the war in POW camps. Only some of them managed to escape and reach liberated areas. Charles Louis Jean Francois Douw van der Krap was one of them.

Douw van der Krap continued to distinguish himself during the war. He was one of the two Dutch men who took part to the revolt in Warsaw in the summer of 1944. He also fought during the battle of Arnhem, where he remained until the end, risking his life, with the British troops. Also, after the failure of Market Garden, he took part in the successful mass-escape of the occupied area under the code name Pegasus 1. He had a strong urge to participate in the battle against the Germans and did everything that lay in his power.

Childhood and the first year of war

Douw van der Krap was born on October 8, 1908 in Surabaya in the Dutch East Indies. He was the son of the coffee producer Adriaan Douw van der Krap and Johanna Jacobina Holman. In 1929 he graduated from the Royal Institute of Navy in Den Helder and he was hired as a navigator/observer by the Naval Aviation at the airport of the Kooy near Den Helder. Six years later he became deployed in the Dutch East Indies on the Moro-Krembangan Air Base in Surabaya.

After a four year service in the Dutch East Indies, he was given temporary leave. Therefore Douw van der Krap went to the Netherlands in 1939 on board on the passenger ship "Dempo". However, the temporary leave from the tropics turned to nothing, because general mobilization was declared. On September 2 he got the command over the river gunboat Hr.Ms.Balder to guard the minefields in the waters around Zeeland.

When the Germans invaded the Netherlands on May 10, 1940, his ship lay in a dry dock in Rotterdam for maintenance. Through the window of his home near the Rotterdam inland Haringvliet, where he was billeted, he saw how Heinkel water planes landed on the Meuse leaving behind German soldiers in dinghies the occupied the Meuse bridges by surprise.

Furious, he went to the Navy depot where he voluntary took command over a department of naval troops of which many were untrained in battle on land. He led this department in the occupation of the Beurs station and later the Old Plantage. He kept his men together and continued motivating them, even when panic broke out among the men because of losses by hostile machine gun and mortar fire.

After the Dutch capitulation, Douw van der Krap resolutely refused to sign the declaration. That is the reason why he was taken prisoner on July 14, 1940 and sent to a German POW camp near Soest, Westfalen after that send to camp Juliusburg, in the current Sleeswijk-Holstein state.

Escape and participation in the revolt of Warsaw

During the transportation to Juliusburg, Charles Douwe van der Krap, climbed onto the roof of the train so he could later jump off, but a German discovered him. After the escape of two Dutch officers from Juliusburg, disciplinary measures were taken. All Dutch officers, among them, Douw van der Krap, were transferred, as punishment, to the infamous POW camp Colditz. According to the Germans, escape was impossible. Yet, many escape attempts were made, a reasonable number successfully so.

Douw van der Krap also tried to escape, together with fellow officers Beer, Frits, Kruimink, by hiding outside under a blanket on which they had sewn leaves. They were discovered but did not give up hope. In 1943 the group of Dutch POWs were transferred to camp Stanislau in Western Ukraine, where they arrived on June 11. There they continued carrying out escape attempts.

Their fourteenth attempt in early December 1943 finally succeeded. Together with Fritz Kruimink he build, in 36 hours, an underground tunnel. Through this tunnel, which led to the outside of the camp, they managed to escape successfully. After two days they bought two train tickets to Warsaw. There they joined the Armia Krajowa, the secret army. The Armia Krajowa, AK, introduced Douw van der Krap to an affiliate of Philips in the Polish capital. He received a new identity with the help of employees at Philips as a chauffeur called Teunis Sülze.

The AK had already started with resistance work in September 1939 and thus gave the Germans a lot of extra work. During the whole war, a whopping four hundred German battalions were needed to keep the Polish areas in German hands. The Armia Krajowa, then under the command of General Tadeusz "Bor" Komorowski, waited impatiently for a signal from the Polish government in exile in London or from the Red Army to revolt. In total about 400,000 men across Poland waited; 40,000 in Warsaw alone.

At the end of July 1944 that signal came. The Polish people were called by Soviet radio to take up arms. The Red Army was only 15 kilometers from Warsaw. General Komorowski gave the order to start operation Storm. On that command, 40,000 resistance fighters with red bracelets went onto the streets. Many civilians also wore these bracelets and joined them.

The battle lasted for 63 days and was characterized by fierce, bloody street fighting. The Western allies could sparsely supply the Polish resistance fighters and the Red Army took no action. The unequal fight would end in a bloodbath. Douw van der Krap also took part in this battle along with Kruimink, but he did not wait for the outcome. At the request of the management of the Philips factories he took leadership of the evacuation of Philips employees from Poland to the Netherlands.

Return to the Netherlands and participation to Market Garden.

In the Netherlands he went into hiding in various places, one of which was with the family Vermeulen in Arnhem. There he saw his daughter after a long time, who he only known as a newborn baby. He joined national fighting teams under the name of Johannes Ludovicus van Ogtrop, a "tobacco farmer" from the Dutch East Indies. After some time, he went into hiding in Oosterbeek.

On September 17, 1944 the biggest airborne operation of the Second World War began, under the code name Market Garden. Three American and British airborne divisions had to land near Eindhoven, Nijmegen and Arnhem. They had to conquer the bridges across the Meuse, the Waal and the Lower Rhine and gain the ground troops access to the Northern German plain. The 1st British Airborne Division, led by general major Roy Urquhart landed near Wolfheze and Oosterbeek and Urquhart and established his provisional headquarters towards the edge of the landing field.

Douw van der Krap, that same afternoon, offered his services to the division staff of Major General Urquhart.. He was asked to take the command of the Dutch volunteers that were collected in the Orange battalion or Orange legion. The Orange battalion existed of approximately 25 members of the resistance that offered their services to the allies directly after the landings . It was organized at the insistance of Lieutenant 1st Class Arnoldus Wolters, a Dutch liaison officer at the headquarters of Urquhart. The members of this battalion performed reconnaissance work for the Brits and functioned as interpreters, guides and assisted with the collection and transportation of the injured. Most of them were unarmed and wore civilian clothes with a orange bracelet on their left arms.

When on September 20th the British troops near Oosterbeek increasingly were driven back, it was decided to withdraw the Orange battalion. Resistance members taken prisoner by the Germans would certainly get no mercy but be tried as spies. Douw van der Krap remained, in spite of the dangers, with the paratroopers and took part to the further fighting until September 26, 1944.

Last war years and after the war.

Douw van der Krap was one of the eighteen Dutch citizens, took part in Operation Pegasus 1. In the night from October 21 to 22, 1944, he was able to escape south of Renkum, across the Rhine to the liberated south, with the remaining members of the 1st British Airborne Division. From the liberated area he was flown to England where he was assigned to the British Navy.

As a navigation officer, he was, posted on board of the HMS Berwich and took part in protecting convoys sailing through the Channel In July 1945 he was deployed with the cruiser HMS Jacob van Heemskerk to the Dutch EastIndies to fight the Japanese. In May 1946, Douwe van der Krap returned to Rotterdam.

After the Second World War, Douwe van der Krap stayed to work in the navy. He was deployed on different cruisers and, among other things, as a teacher on the Royal Institute of Navy. He was also sent as an adviser to Indonesia on behalf of Netherlands, where he helped build the Indonesian Navy. In 1958, he retired as captain.

For his heroism during the Second World War, he was awarded a 4th grade knighthood in the Military William Order on December 17, 1949. A quote that formed the basis for this award reads: "He has continuously demonstrated in the most difficult of conditions, with complete self-effacement and disregard for his own interests, his drive to participate in the fight against the enemy". He also was awarded with the War Memorial Cross and the Resistance Cross. In 1981, he published his memoirs under the title "Contra de Swastika". On December 9, 1995, he died in Wassenaar at the age of 87.

capitulation
Agreement between fighting parties concerning the surrender of a country or an army.
Division
Military unit, usually consisting of one upto four regiments and usually making up a corps. In theory a division consists of 10,000 to 20,000 men.
machine gun
Machine gun, an automatic heavy quick firearm.
mobilization
To make an army ready for war, actually the transition from a state of peace to a state of war. The Dutch army was mobilized on the 29 August 1939.
mortar
Canon that is able to fire its grenades, in a very curved trajectory at short range.
paratroopers
Airborne Division. Military specialized in parachute landings.
POW
Prisoner of War.
Red Army
Army of the Soviet Union.
resistance
Resistance against the enemy. Often also with armed resources.
Swastika
Equilateral cross, symbol of Nazi-Germany. 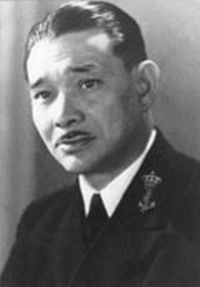 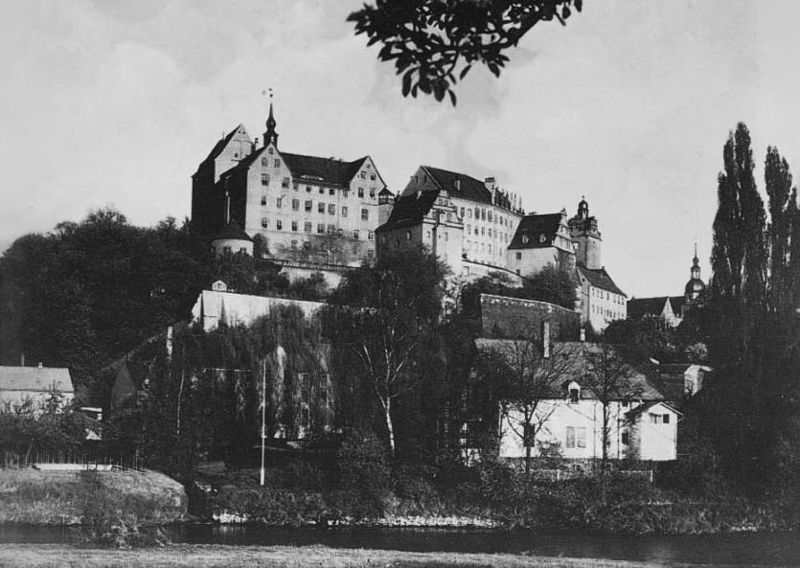 The Colditz Castle. The most escape-proof prison, according to the Germans. Source: commons.wikimedia.org. 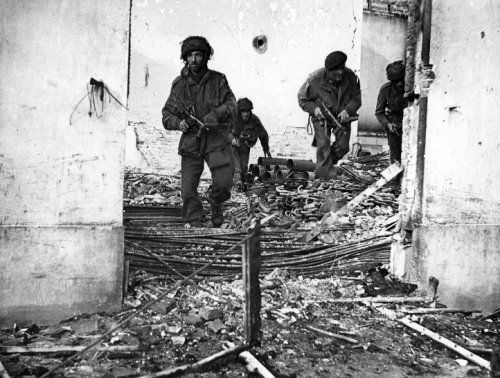 Streetfighting in Oosterbeek. Douw van der Krab was involved, but is not on this picture. Source: Airborne Museum Hartenstein. 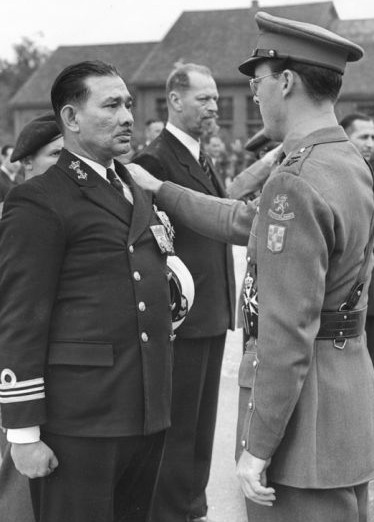 Douw van der Krab received the highest Dutch war distinction: the Military William Order, given to him by Prince Bernard of the Netherlands. Source: Collectie Legermuseum.