Walther Kurt von Seydlitz-Kurzbach was born August 22nd, 1888 in Eppendorff-Hamburg. He descended from Prussian military nobility and was a direct descendant of the famous Prussian general Friedrich Wilhelm Freiherr von Seydlitz. In 1908, Walther joined Feldartillerie-Regiment 36 as Fahnenjunker (cadet). He was promoted to Leutnant in 1910.

In World War One his regiment was deployed in eastern Prussia. In 1915, Von Seydlitz was promoted to Oberleutnant and he fought at the western front on the river Somme in 1915 and 1916. On October 16th, 1918 he was awarded the Ritterkreuz des Hohenzollernschen Hausordes (Knights Cross of the Hohenzollern House Order).

In December 1939 he was promoted to Generalmajor and on March 20th, 1940, he was named commander of the 12. Infanteriedivision. In May 1940, the division was deployed in France. Von Seydlitz was awarded the Ritterkreuz (Knights Cross) on August 15th. In 1941, the division was transferred to the east and deployed as part of 6. Armee. On December 31st, he was promoted to Generalleutnant and was awarded the Eichenlaub (Oak Leaves) to his Ritterkreuz. On March 4th, 1942, he was appointed commander of a special corps that was tasked with Operation Brückenschlag, relieving the encircled German troops near Demyansk. These six divisions, commanded by General der Infanterie Walter Graf von Brockdorff-Ahlefeldt had been surrounded by four Soviet armies in January 1942. Von Seydlitz successfully directed this operation from March to April 1942. On May 10th, he was appointed commander of LI. Armee Korps and he left for Kharkov. On June 1st, he was promoted to General der Artillerie.

In June 1942, the Germans started their advance on Stalingrad. A terrible battle ensued between the German 6. Armee and the 4. Panzerarmee and two Soviet armies, the 62nd and the 64th. In the course of the battle, General der Infanterie, Schmundt, Hitlers adjutant came along. He said if Friedrich Paulus (Bio Paulus) would succeed in capturing Stalingrad he would be allowed to replace General der Artillerie Alfred Jodl (Bio Jodl) as Chief of the General Staff of the O.K.W. (Oberkommando der Wehrmacht, supreme command of the army). Von Seydlitz would then succeed Paulus as commander of 6. Armee. However, Paulus failed to capture Stalingrad.

On November 19th, 1942, Operation Uranus was launched, a massive Soviet offensive that resulted in the encirclement of the German forces in Stalingrad. Reichsmarschall Hermann Göring (Bio Göring) however boasted his Luftwaffe would be able to supply 6. Armee. He went on the assumption this could well be possible because the troops at Demyansk had after all been successfully resupplied by air lift. At Stalingrad however far more soldiers had to be resupplied and the conditions of weather and above all distance were much worse. It proved to be an impossible task for the insufficient numbers of Luftwaffe transport aircraft to resupply 6. Armee.

Hitler (Bio Hitler) did not permit Paulus to break out. Instigated by Von Seydlitz, the corps commanders had agreed they would advise Paulus to break out anyway as otherwise 6. Armee would be lost. Paulus however followed Hitlers orders and did not order a break out. Von Seydlitz tried to force the inevitable by ordering 94. Infanteriedivision to withdraw. Hitler was furious when he found out and assumed it was Paulus work. Therefore he had the northern part of Stalingrad placed under special command of Von Seydlitz.

The Soviet armies were closing in on Stalingrad ever more. On January 31st, Von Seydlitz surrendered and was taken prisoner of war by the Soviets. In captivity, he turned completely against Hitler and he became head of the Bund Deutscher Offiziere (B.D.O. Union of German officers. The union cooperated with the Soviet regime and attempted to destabilize the Wehrmacht. The union also attempted to end the war without Germany being occupied, encourage German soldiers to surrender and encourage the officers corps to dethrone Hitler. Various officers supported Von Seydlitz but most of them refused to cooperate with the Soviets. Naturally, Hitler was furious when he heard of Von Seydlitz treason. He had him sentenced to death in 1944. In the Soviet Union, Von Seydlitz was sentenced to 25 years forced labor on charges of war crimes. On October 16th, 1955 however, he was allowed to return to Germany. The year after, Hitlers death sentence was revoked by a German court. The Bundeswehr however, refused to re-instate his rank and his pension.

Walter von Seydlitz-Kurzbach, the former hero of Demyansk was hated by many in Germany. He passed away in Bremen, embittered and disillusioned, on April 28th, 1976 at the age 87. In 1996, his sentence in Russia was lifted.

Decorations
Read more about the decorations of this person on WW2Awards.com

Abteilung
Usually part of a Regiment and consisting of several companies. The smallest unit that could operate independently and maintain itself. In theory an Abteilung comprised 500-1,000 men.
Brigade
Consisted mostly of two or more regiments. Could operate independently or as part of a division. Sometimes they were part of a corps instead of a division. In theory a brigade consisted of 5,000 to 7,000 men.
division
Military unit, usually consisting of one upto four regiments and usually making up a corps. In theory a division consists of 10,000 to 20,000 men.
front
Largest Soviet ground formation. It was attached to a certain area which gave its name to the units involved. For instance the Voronezh front.
Luftwaffe
German air force.
offensive
Attack on a smaller or larger scale.
Regiment
Part of a division. A division divided into a number of regiments. In the army traditionally the name of the major organised unit of one type of weapon.
Soviet Union
Soviet Russia, alternative name for the USSR.
war crimes
Crimes committed in wartime. Often concerning crimes committed by soldiers against civilians.
Wehrmacht
German armed military forces, divided in ground forces, air force and navy. 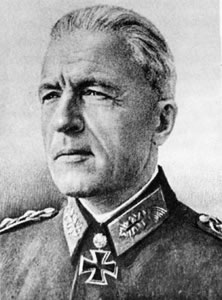 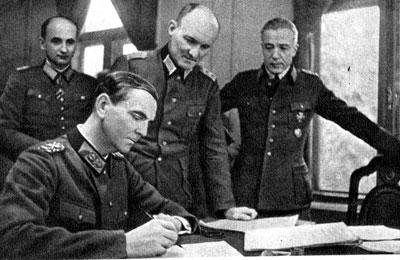 German officers shortly after their arrest. The photo was taken at HQ of the 62. Armee on January, 1943. Von Seydlitz-Kurzbach is fourth from left. Source: http://www.katardat.org.