Władysław Anders was a Polish General who served in the First World War, the Greater-Polish Uprising (1918-1919), the Soviet-Polish War (1919-1921) and Word War II. During his military service he was injured 8 times. His greatest feat of arms was the victory over the Germans in the famous battle of Monte Cassino in 1944. After the war he lived in exile and eventually died in 1970.

Władysław Anders was born on August 11, 1892 in the village Krośniewice-Błonie, near Kutno. During this period, this region was still a part of the Russian Empire. His parents, Albert and Elisabeth Anders, were of Baltic-German descent. He had three brothers and one sister. Anders graduated at a secondary school in Warsaw. Early on, there arose with him an interest in horses and cavalry.

In September 1910 he voluntarily joined the tsarist Russian army and received training as a reserve officer. After passing his exams, he was promoted to officer (praporszczyka). In 1912, he took part in a three-month long reserve training with the 19th Hussars in Riga. Meanwhile, he began a study at the Riga Technical University and joined in with the Polish student association Arkonia.

During Word War I, Anders served as a lieutenant in the 1st Krechowiecki Lancers regiment and was wounded three times. In 1916, he was promoted to captain and in 1917 he graduated from a shortened training at the General Staff Academy in St. Petersburg. During the February Revolution of 1917 he was stationed in Romania as Chief of Staff of the Russian 7th Jager division. Shortly afterwards he decided to join the 1st Polish Corps (I Korpus Polski w Rosji) in the tsarist army, under the command of General Jósef Dowbór-Musnicki. This corps fought against the Bolsheviks on the side of the Germans and stood up for the interests of Poland on Russian territory.

After the German Empire capitulated in 1918 he joined the army of Great-Poland as chief of staff and participated in the Greater-Poland Uprising (1918-1919) in the then Prussian province of Posen (today Polish Poznan). During the Soviet-Polish War (1919-1920) he served as a lieutenant-colonel in the 15th Poznan regiment of Uhlans and got wounded during the battle of the Berezina (1919). On July 15, 1920, Anders received promotion to major and he was allowed to use the rank of lieutenant-Colonel with approval of above. A year later, this rank was officially assigned to him.

In October 1921, Anders began a study at the Military Academy (École Supérieure de Guerre) in Paris and returned in 1924 as a colonel back in Poland, where he received his appointment as chief of the personal staff of the Inspector-General of Cavalry Tadeusz Rozwadowski. In November 1924, Anders was appointed garrison commander of Warsaw.

Anders served as chief of staff on the side of the government during the May coup (12-14 May 1926) of Marchal Jósef Pilsudski. Between 1928 and 1939 he was garrison commander and commander of the Baranowiczse Kresowa and Nowogródzka Cavalry Brigade. In 1932, he led the Polish national team during the equestrian events of the Club of Nations in Nice (France) and won four 1st prizes. On January 1, 1934, Anders was appointed brigadier.

Brigade
Consisted mostly of two or more regiments. Could operate independently or as part of a division. Sometimes they were part of a corps instead of a division. In theory a brigade consisted of 5,000 to 7,000 men.
cavalry
Originally the designation for mounted troops. During World War 2 the term was used for armoured units. Main tasks are reconnaissance, attack and support of infantry.
division
Military unit, usually consisting of one upto four regiments and usually making up a corps. In theory a division consists of 10,000 to 20,000 men.
regiment
Part of a division. A division divided into a number of regiments. In the army traditionally the name of the major organised unit of one type of weapon.
Revolution
Usually sudden and violent reversal of existing (political) the political set-up and situations. 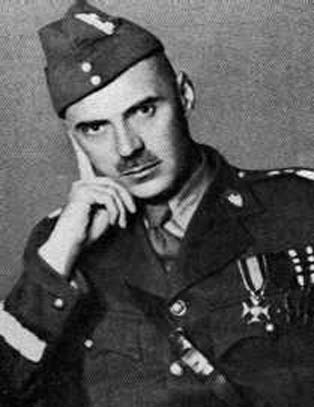 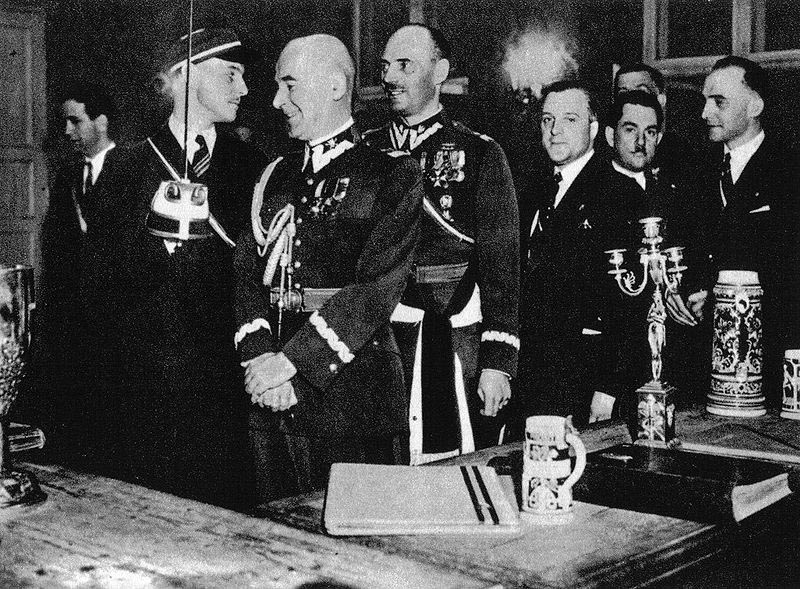 On September 1, 1939, the German Wehrmacht invaded Poland and started a campaign with the goal the capture of the western part of the Second Polish Republic by the German Reich (the eastern part of Poland was assigned to the Soviet Union in the secret protocol tot he Molotov-Ribbentrop treaty). The fire baptism of Brigadier Wladyslaw Anders was the Battle of Mlawa (1-3 September), but his Nowogródzka Cavalry Brigade was soon forced to withdraw and even worse, to split up. Then he was engaged in the bloody battle of Bzura (9-12 September).

As of September 12, 1939 Anders commanded the Cavalry Operational Group General Anders and he was engaged in a tough battle with the German army for Minsk Mazowiecki and Tomaszo at Lublin. On September 22, Anders assault group recaptured the city Krasnobród, after which they left the city and made a temporary stop in the village of Maidan Sopocki for a rest. The assault group then marched towards Lvov.

Brigadier Anders decided to split his assault group into smaller sections due to the threat from two fronts (the Soviet Union had in fact declared war on Poland on September 17). On September 29, 1939 Anders was twice wounded and was taken prisoner shortly afterwards by the Soviets.

Initially, Anders was kept prisoner in the Lvov hospital and next in the Brygidki prison in Lvov. On February 29, 1940 he was deported to Lubyanka in Moscow, by the NKVD, the Soviet secret service. During his 22-month stay in this prison, he was tortured repeatedly and urged to join the Red Army.

Shortly after the German invasion in the Soviet Union on June 22, 1941 Brigadier Anders was released so that he could form a Polish army, the Polish Armed Forces in the Soviet Union, under the command of the Red Army. On July 30, the so-called Sikorski-Maiski Treaty was signed between the Polish prime minister in exile in London, Wladiyslaw Sikorski and the Soviet ambassador to Great Britain, Iwan Maiski. This treaty meant that Poland and the Soviet Union resumed mutual political relations. These were severed after the Soviet Union declared war on Poland on September 17, 1939. Meanwhile, on August 4, 1941, Anders was appointed commander of the Polish Armed Forces in the Soviet Union and was promoted to General on August 11, 1941. Political issues and a continuing lack of weapons, food and equipment ultimately wrecked the plan to deploy the Anders Army side-by-side with the Red Army. General Anders evacuated his army (along with more than 20,000 Polish citizens) to Iran in the summer of 1942. This country was invaded in 1941 by the British and Soviets to secure the Iranian oil fields. This military action has entered the history books as Operation Countenance. Anders army (now officially under the command of the British Near East Command) was stationed in Palestine.

On July 21, 1943 the 2nd Polish Corps (Drugi Korpus Woiska Polskiego) was established out of elements from Anders army. General Anders remained the commander of the newly formed army. In December 1943, this corps was transferred to Egypt and from there shipped to Italy. This transfer lasted to January 1944. The 2nd Polish Corps came under the command of the British Eight Army.

Before the 2nd Polish Corps was thrown into battle, General Anders addressed his soldiers with the following speech:

"Soldiers! Dear brothers and my children! The moment of battle is there. We have long been waiting fort his moment of retribution and revenge on our eternal enemy. Side by side our divisions, British, American, Canadian, New Zealand, French, Italian and Indian divisions will accept battle. Our task will be known all over the world as that of the Polish soldier. In these moments we will be in their minds and the entire (Polish) nation in their hearts. The spirits of our comrades will always be with us. Let the lion awake in your heart!"

In 1944 en 1945, the 2nd Polish Corps was involved in various fighting and battles in Italy, including the battle of Monte Cassino (eventually won with the aid of the Polish). The 2nd Polish Corps remained in Italy until 1946, before it was finally disbanded in Britain in 1947.

Meanwhile, on February 26, 1945, General Anders was appointed supreme commander of the Polish forces in the West. He held this place until June 21, 1945. Anders was a fierce opponent of the Yalta Conference (4-11 February 1945) due to the privileges promised to the Soviet Union with regard to Poland. Under this treaty, the eastern regions of Poland became part of the Soviet Union and the newly established Peoples Republic became a state within the Soviet sphere of influence.

Around this period, General Anders was accused of involvement in an alleged assassination attempt on General Wladislaw Sikorski (Prime Minister of the Polish Government in Exile), but this matter was quickly hushed up.

Brigade
Consisted mostly of two or more regiments. Could operate independently or as part of a division. Sometimes they were part of a corps instead of a division. In theory a brigade consisted of 5,000 to 7,000 men.
Cavalry
Originally the designation for mounted troops. During World War 2 the term was used for armoured units. Main tasks are reconnaissance, attack and support of infantry.
invasion
Armed incursion.
Red Army
Army of the Soviet Union.
Soviet Union
Soviet Russia, alternative name for the USSR.
Wehrmacht
German armed military forces, divided in ground forces, air force and navy. 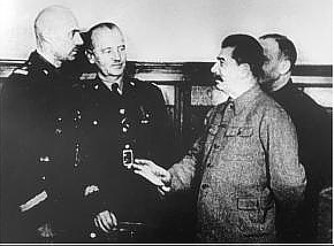 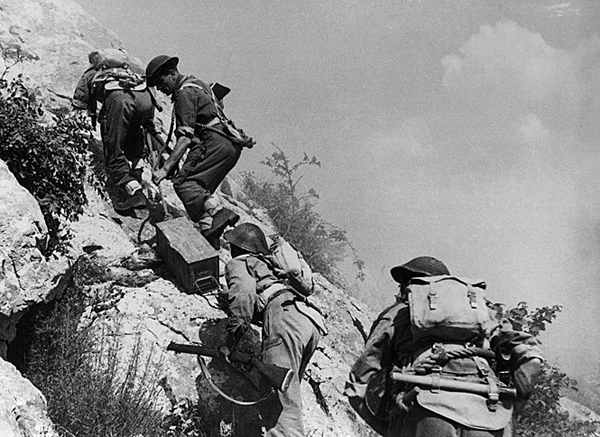 On September 26, 1946 The Peoples Republic of Poland took away Wladislaw Anders´ citizenship and his general rank (he regained both posthumously on March 15, 1989). As a nationalist, he was no longer welcome in communist Poland. From November 8, 1946 until August 4, 1954, Anders occupied the function of Inspector General of the Armed Forces. At that time there were two Polish governments: one in Poland (communist and under Soviet influence) and one in London (until 1990 and pro-Western). After the war, Anders played an important role in maintaining the Polish government in exile in London. In 1949, he became president of the National Treasury, and since 1954 he kept a prominent place in the so-called Council of Three (Rada Trzech), the collective state administration in exile. On May 16, 1954, Wladyslaw Anders received promotion to Lieutenant General. During his 24-year exile in London, Anders remained committed to the release of Polish prisoners from Soviet camps.

Lieutenant General Wladyslaw Anders died on May 12, 1970 in London (exactly on the 26th anniversary of the Battle of Monte Cassino). He left a wife and two daughters. He was laid in state in the church of Andrzej Bobola in London. His passing away received much attention in the Western press. According to his last will, Anders was buried between his fallen troops at the Monte Cassino Polish war cemetery.

During his life, Wladyslaw Anders was responsible for various publications, such as his memoires over the years 1939-1946 and the book Hitlers defeat in Russia, 19141-1945. He also wrote the introduction for the publication The massacre of Katyn, in the light of the documents.

From 1990 on (after the collapse of communism in Poland) streets and squares in Poland were named after him. That also applies for various Polish military units, schools and a number of government organisations. In 2002, the Polish National Bank, responsible for the issue of memorabilia with the image of Anders and the literary Polish book year 2007 was dedicated to him. Several monuments were also set up to commemorate Wladylaw Anders or one of his army units.

communism
Political ideology originating from the work of Karl Marx Das Kapital written in 1848 as a reaction to the so-called class struggle between the proletariat (labourers) and the bourgeoisie. According to Marx the proletariat would take over power from the well-to-do classes though a revolution. The communist movement aspires an ideal situation where the means of production and the means of consumption are common property of all citizens. This should end poverty and inequality (communis = common).
Katyn
Wood near Smolensk in the Soviet Union. In 1943 the Germans found the bodies of approximately 4 ,400 executed Polish officers here, killed by the Russians. 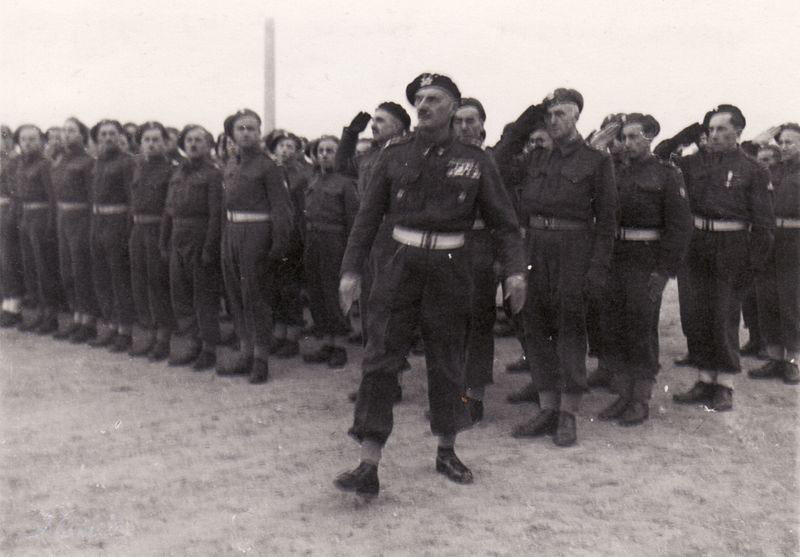 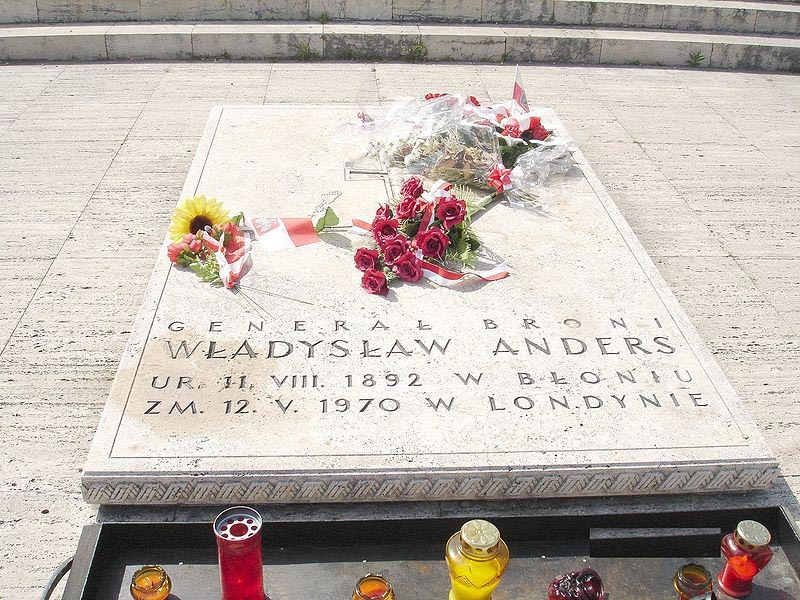 The grave of Wladyslaw Anders on the Polish war cemetary at Monte Cassino. Source: Wikipedia.

The burial ceremony of Lieutenant-generaal Anders on May 23, 1970. Source: Youtube. 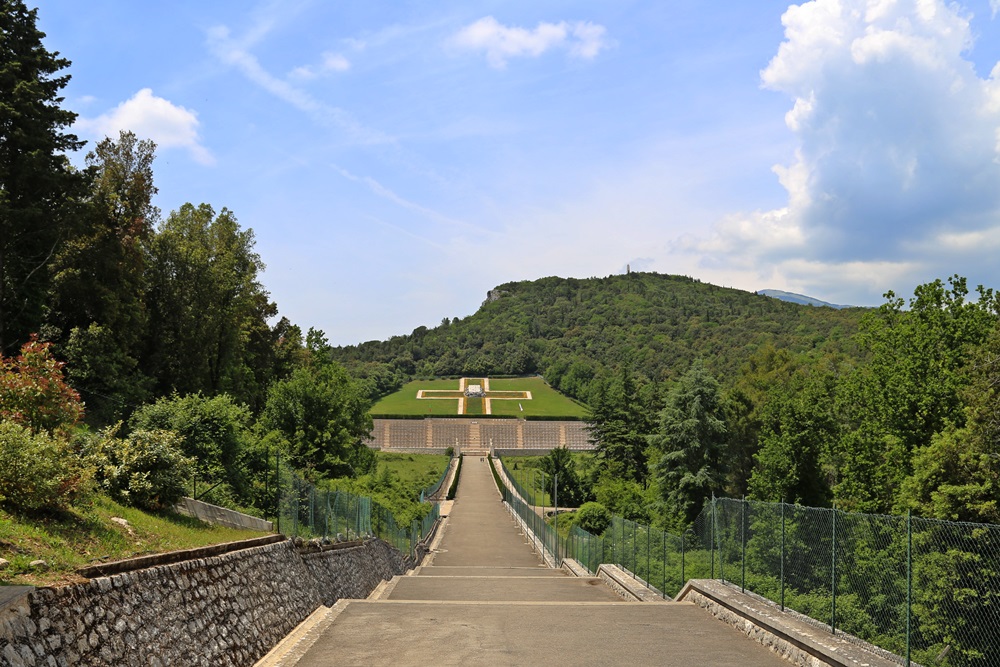 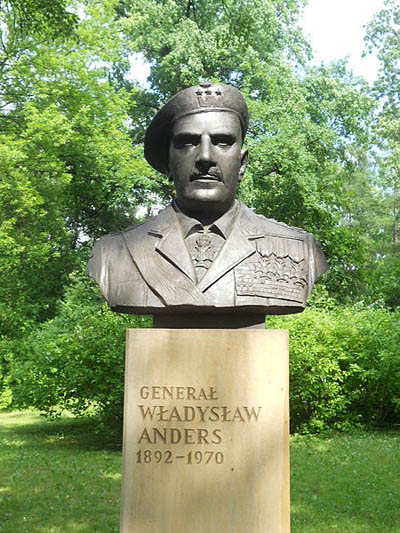 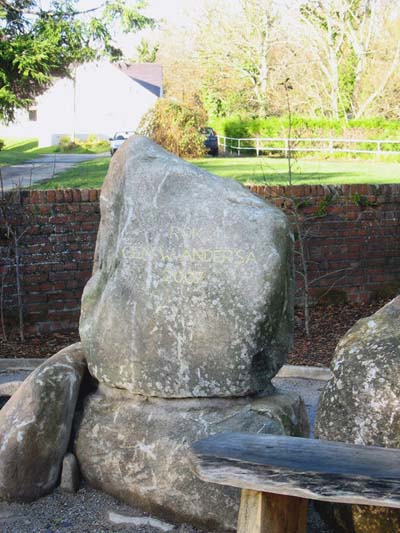 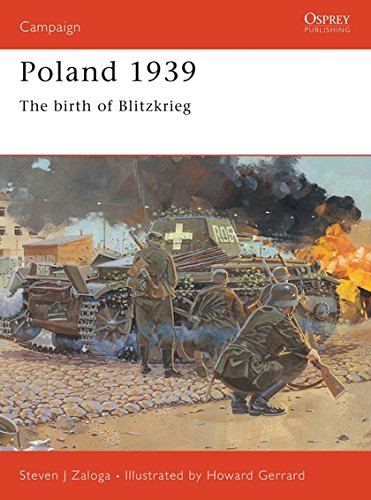