"One secret of success in life is for a man to be ready for his opportunity when it comes." This quote by British Prime Minister Benjamin Disraeli can be applied to American General Anthony Clement McAuliffe. He became known, in the absence of Major General Maxwell Taylor, as the acting commander of the troops defending Bastogne during the Ardennes offensive and of course for his brief and succinct response when the Germans presented their surrender demand during the same offensive.

Anthony Clement McAuliffe was born on July 2, 1898 in Washington DC. Between 1916 and 1917 McAuliffe studied at the University of West Virginia. But already at a very young age, McAuliffe knew that he wanted to join the army. That is why he enrolled at the West Point Military Academy, from which he graduated in 1918 as 2nd Lieutenant. During the interbellum, McAuliffe held several positions in field artillery.

On D-day, June 6, 1944, the 101st Airborne Division was deployed in Normandy during Operation Overlord. The division had to clear the roads leading inland from Utah Beach for the troops that arrived ashore from the sea. McAuliffe, who had already risen to the rank of Brigadier General, also parachuted into Normandy with the 101st Airborne Division. However, he had never had formal parachute training before and this was the first parachute jump for the artillery commander. Fortunately for him, he landed unscathed from his first jump. After D-day, the 101st Airborne Division had to conquer Carentan. However, this town was persistently defended by the Germans. On June 12, 1944, McAuliffe was assigned by Major General Maxwell Taylor to coordinate the decisive attack on Carentan. The division was transferred to England to rest by mid-July and to supplement with additional troops to regain full strength.

McAuliffe on December 27, 1944. At that moment he commanded the 101st Airborne Division. Source: NARA

In September 1944, McAuliffe, still commander of the 101st Airborne Division artillery, landed in the Netherlands by glider during Operation Market Garden, Field Marshal Bernard Montgomery's plan to occupy the bridges on the Eindhoven-Nijmegen-Arnhem route as a mean to cross the Rhine and enter Germany. The division McAuliffe was part of, landed at Eindhoven and fought some bitter battles against the Germans there. McAuliffe, however, arrived in the Netherlands with the artillery only two days after the operation began. The Germans tried to cut off the Allied passage so that the troops could not be relieved. The Germans tried this in the area of the 101st Airborne Division. It was a scattered attack and its main focus was Veghel. Major General Taylor, however, was not in Veghel himself, but McAuliffe happened to be, he was looking for a new command post for the division. Taylor assigned McAuliffe to defend Veghel. The Germans made several attempts to conquer Veghel, but McAuliffe and his men held out. When the division was relieved at the front, the men got time to rest and to recover in Mourmelon. Major General Maxwell Taylor used this break to attend a wedding in England. McAuliffe became the temporary commander of the division.

On Saturday, December 16, 1944, the Germans embarked on a major counter-offensive in the Ardennes. This offensive is known as the Ardennes Offensive, the Allies named it "Battle of the Bulge". The German code name was "Wacht am Rhein". The Allied troops were outnumbered and the attack came as a total surprise. Initially, the Germans were able to advance fairly quickly. Dwight Eisenhower, the Allied Commander-in-Chief, was aware of the significance of retaining the important road junction in the city of Bastogne and sent the 101st Airborne Division, under McAuliffe's supervision, to defend it. 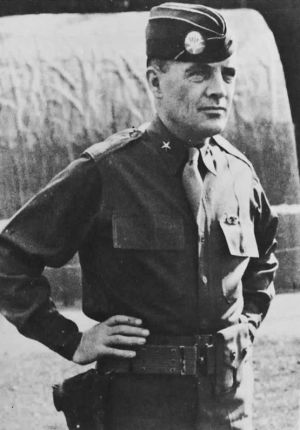 The 101st Airborne Division had a hard time during the defense of the besieged city of Bastogne. The Germans were in the majority and had much better equipment. The American troops were short of everything. To spare them, the German commander gave McAuliffe an ultimatum. The Americans could surrender or be crushed by the Germans. Major Alvin Jones, operations officer of the 327th Glider Infantry Regiment gave the ultimatum in the Heintzelkazerne to McAuliffe's Chief of Staff, Lieutenant Colonel Ned. D. More. More had McAuliffe read the ultimatum. When McAuliffe read the surrender demand, his very first response was "NUTS!" He refused to accept the demand, but he did not know what would be an appropriate response. The officers who were with McAuliffe in the Heintzelkazerne at that time thought McAuliffe's initial reaction was the best. Hence McAuliffe responded: "To the German commander: Nuts! From the American commander. " It would be one of the most famous statements of the Second World War and the main reason for McAuliffe's fame. The Germans, however, did not understand McAuliffe's response. Colonel Joseph H. Harper, commander of the 327th Glider Infantry Regiment translated the response for the Germans as "go to hell". Eventually the troops held out at Bastogne until units of George Patton's 3rd Army broke the siege.

Major General Maxwell Taylor, who had to follow the siege of Bastogne from the sidelines, took command of the division again now that the siege was broken. McAuliffe returned to his previous role as artillery commander. During the final period of the war, McAuliffe commanded the 103rd Infantry Division. McAuliffe was awarded the Distinguished Service Cross, the third highest award in the US Army, for his role in defending Bastogne.

After the war, McAuliffe held various positions in the army. He was in charge of the Army Chemical Corps. This organization deals with the defense against chemical and nuclear attacks and provides the army with the necessary equipment. Later he was also in charge of the Army Personnel, where he was basically mentoring soldiers in active service and veterans. In 1953 McAuliffe returned to Europe as commander of the American 7th Army. He was appointed General in 1955. Later McAuliffe was also Commander-In-Chief of the US Army stationed in Europe. McAuliffe left the army in 1956. He started working in the pharmaceutical sector at the Cyanamid Corporation, a pharmaceutical manufacturer. He worked there from 1956 to 1963. He also served as chairman of the New York State Civil Defense Commission from 1960 to 1963, where he applied his military experience in defense to New York. After his retirement, McAuliffe resided in Chavy Chase, Maryland. McAuliffe died on August 11, 1975 at the age of 77. He is buried at Arlington National Cemetery, together with his wife, son, and daughter. 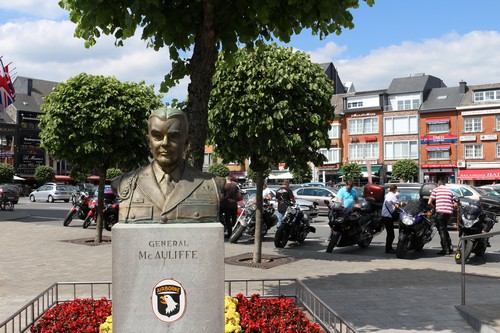 Ardennes offensive
Battle of the Bulge, Von Rundstedt offensive or die Wacht am Rhein. Final large German offensive in the west from December 1944 through January 1945.
D-day
The day of the long awaited invasion of western Europe in Normandy, France, 6 June 1944. After a long campaign of deception the allies attacked the coast of Normandy on five beaches to begin their march on Nazi Germany. Often explained as Decision Day, though this is entirely correct. The D stands for Day as generally used in military language. In this case it means an operation beginning on day D at hour H. Hence Jour J in French.
Division
Military unit, usually consisting of one upto four regiments and usually making up a corps. In theory a division consists of 10,000 to 20,000 men.
front
Largest Soviet ground formation. It was attached to a certain area which gave its name to the units involved. For instance the Voronezh front.
Infantry
Foot soldiers of a given army.
interbellum
Latin: Between war. Years between the Great War and World War 2.
Marshal
Highest military rank, Army commander.
mid
Military intelligence service.
offensive
Attack on a smaller or larger scale.
Regiment
Part of a division. A division divided into a number of regiments. In the army traditionally the name of the major organised unit of one type of weapon. 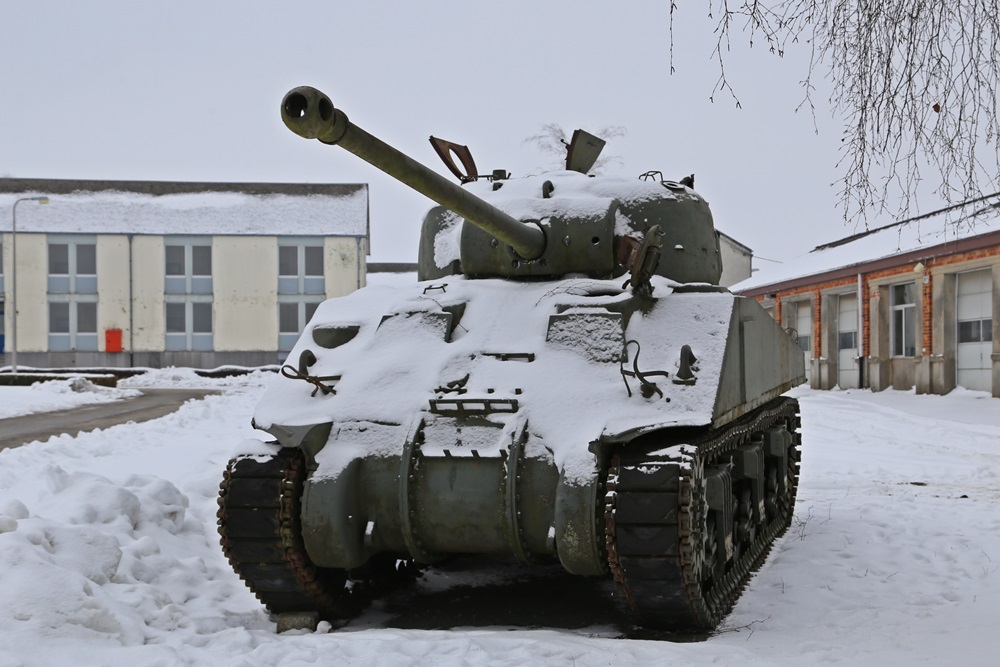 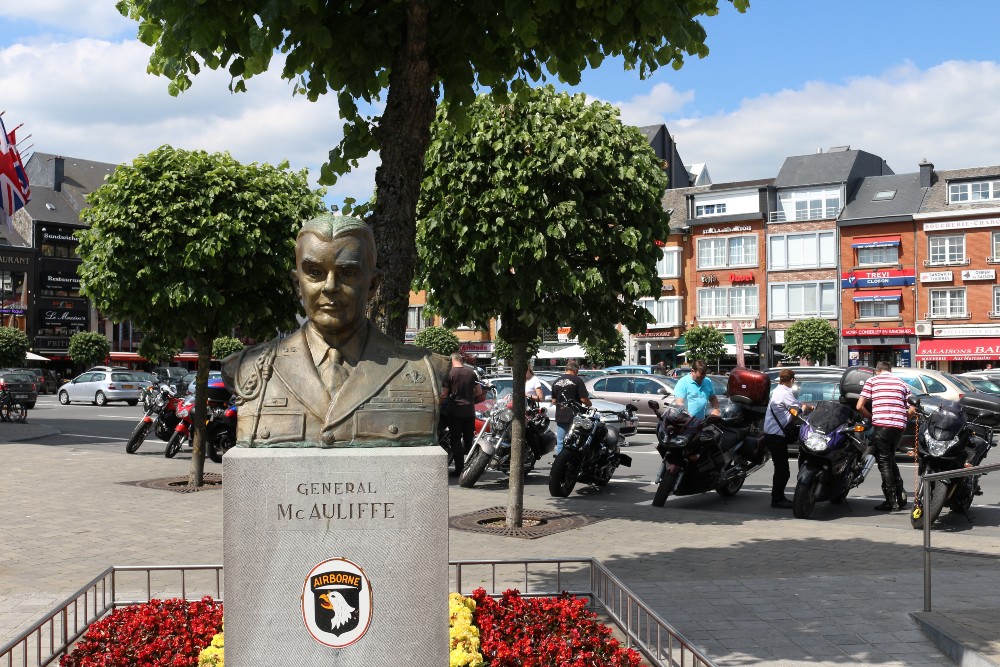