The German Ehrenkeurz des Weltkrieges was instituted on June 13th 1934 by the German president Paul von Hindenburg. It was awarded to honour those who contributed to the war efforts during the First World War. The cross was also called the "Hindenburg-cross". It was the first decoration to be instituted by the new National Socialist government.
The decoration was awarded in three versions, the Ehrenkreuz für Frontkämpfer (for active military in WW1), Ehrenkreuz für Kriegsteilnehmer (for civilians that contributed to the war efforts) and the Ehrenkreuz für Witwen und Eltern gefallener Kriegsteilnehmer (for widows and parents of fallen soldiers).
It is a very common decoration and by November 15th 1936 already 8 million were awarded.
From 1940 onwards also inhabitants of the Saar, Danzig, Austria, Czechoslovakia and Memel could be awarded.

The decoration resembles the Iron Cross and wears a Laurel wreath of Oak leaves wreath. In the middle stand the year numbers 1914/1918. Depending on what version the whole bears two crossed swords. The design is from Eugene Godet.
The ribbon knows a black underlining with two white and a red band. This makes a black-white-black-red-black-white-black striping. The ribbon resembles that of the War remembrance cross of Prussia 1870-1871.

The casing of the decoration is either of wood or paper in different colours and bears the writing "Treue um Treue" and Hindenburgs signature. 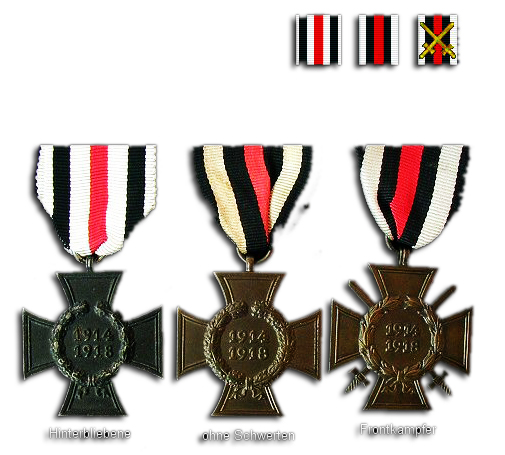 Ehrenkreuz für KriegsteilnehmerCross of Honor for war participants
In the database: 3
Issued:1120449

Ehrenkreuz für HinterbliebeneCross of Honor for next of kin
In the database: 0
Issued:719082