The medal was designed by W. Peekhaus from Berlin and was produced by numerous factories. The medal consists of a wreath of 8 bundles of 3 oak leaves each with an oblong at the bottom of the wreath. The oblong is tapered in the middle and the first oak leaves sprout from the bottom of the oblong. An eagle in flight is mounted at the top of the wreath and is holding a large swastika in one of its claws. The main motive is a large and very detailed 88mm anti-aircraft gun. This gun is trained upwards to the right and the barrel permeates the 7th bundle of oak leaves on the right side of the wreath. The medal is 2.48" high, 1.77" wide and the width of the wreath is 0.23". The reverse of the medal is flat with a standard pin and hook construction.

The medal was produced from various metals; medals made of aluminium being the rarest and made of zinc or a zinc alloy the most common. If the medal is marked with the logo or the LDO number of the producer, then this is engraved on the reverse of the medal. To prevent damage during action, a textile version to be worn on the battleuniform was produced from 1942 onwards.
Some well known manufacturers are Gustav Brehmer from Markneukirchen, C.E. Juncker from Berlin, F.W. Assmann & Sons from Lüdenscheid, Walter & Henlein from Gablonz and the Brothers Wegerhoff from Lüdenscheid. 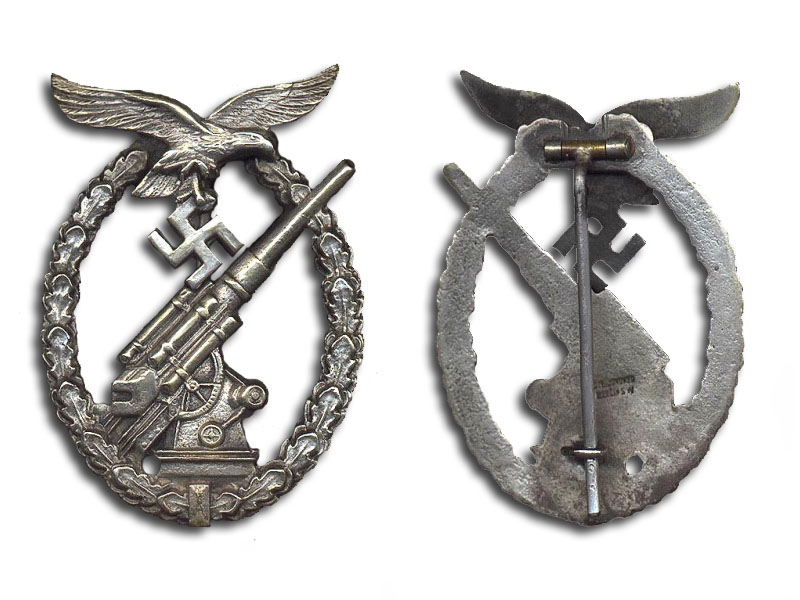