The Bronze medal is awarded to members of armor or cavalry units with excellent record of service. The nominee has to be awarded by letter that is accompanied with an extensive biography. The nomination has to be approved by a Colonel.

The criteria are:
- Be a member of Armor Association at the time of award approval,
- For armor branched officers who demonstrate successful command of an armor or cavalry unit,
- For enlisted CMF 19 soldiers who have successfully been branch certified as a platoon sergeant, first sergeant or command sergeant major,
- For scout pilots in cavalry organizations who have successfully completed the cavalry mission while a member of the unit,
- For all nominees, demonstrate tactical and technical competence at both their current levels of service and at those of their subordinates,
- Nominated by someone from the armor branch or career field and who is a member of the association,
- Approval for the award by the first armor colonel (O-6) in the awardee's chain of command. 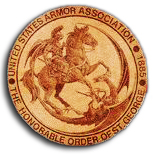