Still many S-boat crewmembers were not pleased with the new award. Especially the chosen design was not favourite. The first design (1.Modells) by Wilhelm Ernst Peekhaus, was modified by the commander of the S-boats, Korvettenkapitän Rudolf Petersen, himself. From January 28th 1943, the new design was awarded by the Oberbefehlshaber der Kriegsmarine. This new design ( 2.Modell) became very popular.

The 1.Modell was made out of a Bronze Alloy (Tombakbronze) and Zinc by manufacturers like F.W. Assmann & Söhne from Lüdenscheid ( marked "A" on the averse), Foerster & Barth from Pforzheim (marked with a "lying" "L/12" on the averse) and C. Schwerin & Sohn from Berlijn ("Schwerin Berlin 68" twice on the averse). The 2.Modell was mostly fabricated out of fine Zinc with a Silver or even Gilded layer. Experts do not agree yet whether these also were manufactured in a Bronze Alloy (Tombakbronze), although examples are known. This second model was produced by manufacturers like F.W. Assmann & Söhne in Lüdenscheid (on the reverse a triangle shaped "AS"), C. Schwerin & Sohn from Berlijn ("FEC. W. E. PEEKHAUS AUSF. SCHWERIN BERLIN 68" twice on the averse) and Rudolf Souval from Vienna (the letters "R.S." on the averse). A third form, which is mostly referred to as Modell.1 also was produces in Paris by Mourgeon.
From all models also miniatures were produced to be worn on civil costumes. These miniatures were to be bought by the recipients himself.
The Award-document that was accompanying the award is only known with a drawing of the Modell.1 type award. Mostly the receiving of the award was noted in the "Soldbuch" or "Wehrpass". Besides that there were also known documents that were folded in the soldiers passes in the form of so called "Besitzzeugnisse" that were either typewriter or hand written.

Together with the "Hilfskreuzer-Kriegsabzeichen" and the "U-Boot-Frontspangen", the "Schnellboot-Kriegsabzeichen" is one of the rarest Kriegsmarine Awards. Especially the 1.Modell is very rare. Beceause of this fact there are many replicas constructed. Most replicas are to be recognised because they are not as sharp as the original and they look to nice to be trough. Newer replicas are better, but have mostly a different form of manufacturer stamp on the averse. From the 2.Modell most replicas are manufactured in a Bronze Alloy (Tombakbronze). 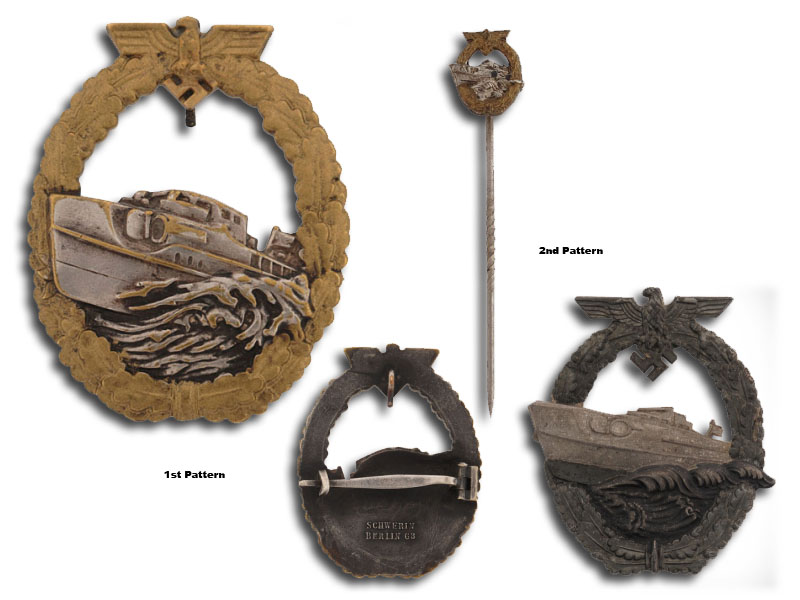