This Order, the highest Sovjet military Order was established on November 8th 1943 by the Presidium of the Supreme Soviet and was destined for high ranking commanding officers of the Red Army. It was awarded for the succesfull execution of massive military operations, involving entire fronts, resulting in a radical change of situation in favour of the Red Army.
The badge is made of platinum with a pentagonal ruby star, bordered with diamonds and measuring almost 1.75" (72mm) point to point. In between the points of the star are diverging rays set with 110 diamonds. In the centre of the star is a blue enamelled roundel surrounded by a wreath of laurel and oak leaves with images of the Kremlin wall with Lenin' s tomb and the Spassky Tower in platinum.
The ribbon is 1.75" (4.5 cm) wide and consists of a wide central strip of red (13 mm), vertically down the middle flanked by narrow stripes in green, dark blue, red and light blue (all 3 mm each) in this order and divided by narrow white stripes (0.5 mm). At the outer edges of the ribbon three stripes in orange, black and orange.
The badge consists of 16 carats in diamonds. As special distinction, a roll of honour is kept in the Kremlin Palace engraved with the names of the recipients of the Order.

Two difeerent variants can be fond, "Variant 1" with screwback and "Variant 2" with pinback. 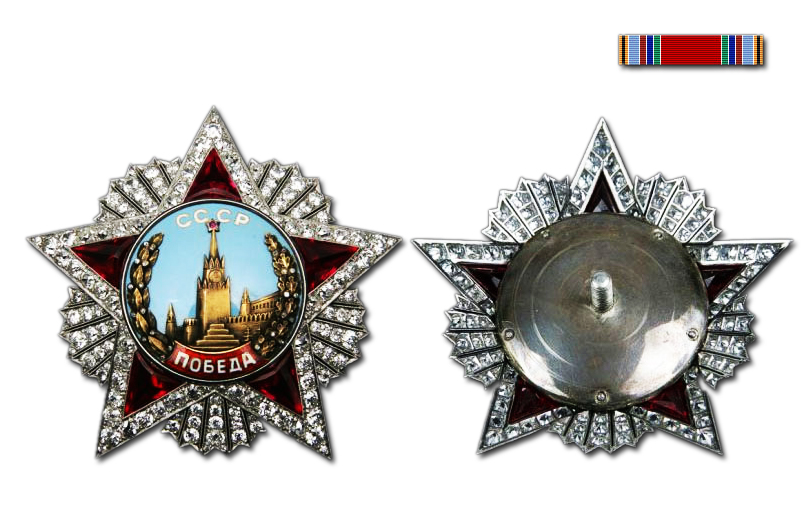