The order is named in honour of José de San Martín. The award was established in 1943, and the design was made by Ángel Eusebio Ibarra García. 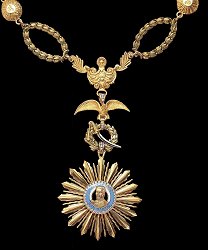