Het Ereteken voor Belangrijke Krijgsbedrijven, als called the Expeditiekruis, was instituted on February 19th, 1869. It was awarded to persons participating in campaigns in the Dutch East Indies. In this it can be compared to campaign medals awarded by other countries.

The decoration has the form of a four armed cross and is in Berlin Silver. The measurements over the arms are 40 mm. In the middle is a medallion with the image of King Willem III, surroundes by a chain with the text "VOOR KRIJGSVERRICHTINGEN". Between the arms of the cross oak leaves with oaks can be found. The back side is non imaged. The cross is known to have 12 variations, the miniature more than 100.
Most of the decorations awarded in WW2 are of the so-called Type II. The Type II differs from the Type I in the form of the image of King Willem III. The Type II was made during WW2 in two issues. The Type II 2nd Emission 1942 model Stokes, on the back shown in 1 mm letters the name "STOKES". The other Type II is the 3rd Emission 1942 model made by Begeer.

The 38 mm wide yellow-green-yellow ribbon was worn with one or more clasps. A total of 33 clasps were instituted. During WW2 only the clasp "TIMOR 1942" was awarded. This clasp was instituted on October 29th, 1942 (K.B. no 7) and was to be awarded to those who, participated in the guerrilla war on Timor in 1941-1942 against the Japanese forces and to members of the Koninklijke Marine who evacuated these guerrilla's to Australia.
When only the ribbon is worn, the clasps are depicted as silver stars. A maximum of four stars were allowed.
Beside the clasps the ribbon could also depict the crown of the "Eervolle Vermelding" and/or two crossed sabres for the awarding of the "Eresabel". 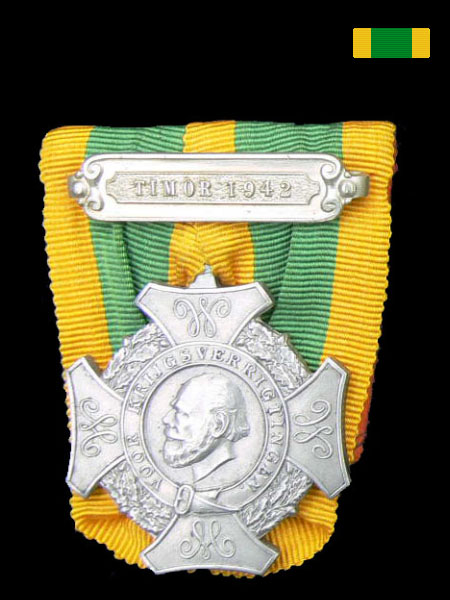