The history of the Iron Cross dates back to her introduction as a Prussian decoration for merit by King Friedrich Wilhelm III of Prussia on March 10th 1813. It was instituted as a direct result of the liberation war against Napoleon. Because of this institution it was more or less a campaign decoration.
After Napoleon defeated the Prussian army in 1807, it was forced to fight for the French cause. Right after Napoleons defeat at Moscow in December 1812, the Prussians resisted their oppressor. To commemorate that fact the Iron Cross was instituted on March 10th 1813. The design came from Karl Friedrich Schinkel, a Prussian architect.

The design was kept very simple. The core was made by a black cross, surrounded by a silver trim. The obverse side had an oak leave in the middle. Below that on the lower arm the year 1813 was placed. The upper arm was gifted with a crowned Royal Cipher "FW". The front side would be blank until the original obverse turned to front side in 1838. The decoration was instituted with three grade, the Grosskreuz (Grand Cross) for senior commanders and the 1. Klasse (1st Class) and 2.Klasse (2nd Class) for individual merit in combat. The 1st and 2nd Class crosses had a size of 42mm although examples are known within the sizes 28mm to 42mm. The 2nd Class cross contained an eye welded to the top with which it could be attached to a ribbon. At the backside of the 1sr Class cross two eyes were welded to be able to sew is to the uniform. The ribbon was black with on both sides a white stripe. Non-combatant receivers got the Iron Cross on a white ribbon with two black stripes. The Grand Cross was 62mm in size and was worn on a ribbon around the neck in the same colours.

The Iron Cross was only to be awarded in war times with the goal to replace the peacetime awards. In reality other awards like the Roter Adlerorden mit Schwertern (Order of the Red Eagle with Swords) and the Pour le Mérite were also awarded.
After the Battle of Waterloo in 1815, the Iron Cross was not to be awarded until the ending of the Franco-Prussian war in 1871. The decoration was re instituted on July 19th 1870 as a campaign award for merit.
The front (original obverse) was kept unchanged, but became once again the obverse. On the renewed front the upper arm got a crown and the Royal Monogram "W" was placed in the middle. The year 1870 was placed on the lower arm. After the Franco-Prussian War, the Iron Cross again wasnt awarded until the outbreak of the First World War.

It was again renewed in 1914. The institution date for the new Iron Cross was August 5th 1914. The design was kept the same as the 1870 version, but the date of 1870 was replaced with 1914. The Iron Cross retained her three grades, but this time with a standard size of 42mm. The width of the ribbon could vary between 25mm and 30mm. The construction was unchanged with a blackened iron core surrounded with the silver trim. Because iron and silver became rarer during the war, later crosses were made of alloy and silvered plated trim.

In 1939 the Iron Cross again was renewed, this time as an order of the German Reich. The ribbon now got the Reichs colours black white and red. According to the "Stiftungsverordnung" of September 1st 1939 (officially noted in RGBl. I v. 02.09.1939, no. 159, p. 1573 and also in RGBl. I v. 10.06.1940, no. 102, p. 849), the 1939 version became an Order, for in the text it is stated: "Der Orden des Eisernen Kreuzes ist wie folgt eingeteilt: ...".
In contrary to the old Imperial orders, the Iron Crosses grades all could be awarded regardless the military ranks. Also the Iron Cross became for the first time a real German decoration. Before that is was a Prussian decoration. The original symbolic Iron Cross was remained unchanged, but the old Imperial and Royal symbols were replaced by the new Reich symbol of the Swastika. The year was changed to 1939 as the new date of institution.

At the institution date, four grades were instituted, 2nd Class, 1st Class, Knights Cross and Grand Cross. The grades would be further extended during the war years. To commemorate actions of merit from the First World War, both the 1st Class (EK I) and 2nd Class (EK II) crosses could be worn in the form of a new clasp called a "spange", worn on a First World War ribbon. To obtain a higher grade, all lower grades had to be obtained first. In some cases EK II and EK I could be obtained at the same time. Even more rarely this also was done with higher grades. It was allowed to wear all grades at the same time, which was not a custom in other countries with comparable orders. Most recipients found the original decoration to be very valuable that they often bought cheaper replica at own costs. The original was mostly kept at home.

A grade in the Iron Cross could be awarded for different reasons. Beside actions of exceptional merit, it could also be obtained for successful military planning, courage in non military actions, exceptional leadership and even for merital actions done by the soldiers under the command of the recipient. The Iron Cross could be obtained by military within the whole Wehrmacht, military from Germanys allies, but also by uniformed civilians.

After the Second World War the carrying of the Swastika and German World War 2 decorations for military and political activities were forbidden by law. In 1957 this law was changed. Decorations from the Second World War were permitted. The Swastika still is forbidden, but the decorations themselves could be worn again, when the Swastika was removed. Recipients of the Iron Cross got with this possibility their recognition for pure military merit and it lost her political history. To replace lost or broken examples and because many didnt want to remove the Swastika from their historical item, in 1957 from most former military decorations a special denazified version was produced. 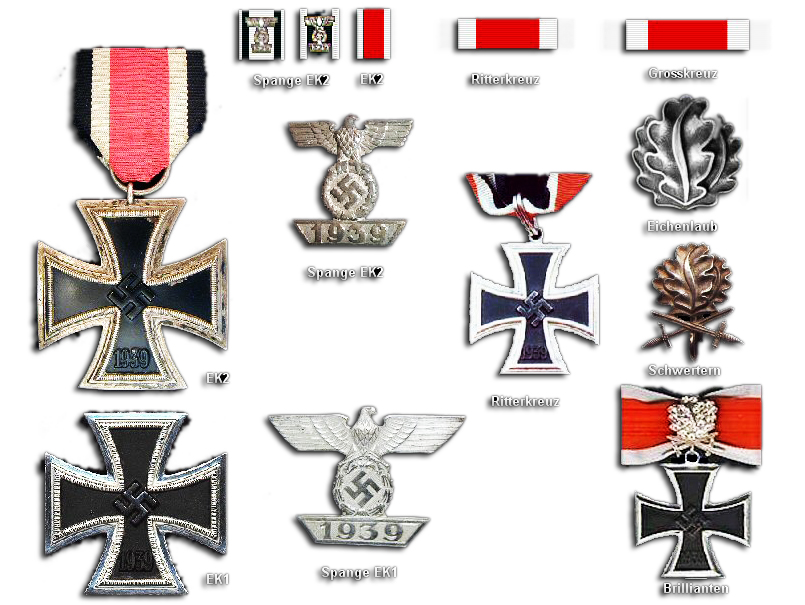 Großkreuz des Eisernen KreuzesGrand Cross of the Iron Cross
In the database: 1
Issued:1

Ritterkreuz des Eisernen KreuzesKnights Cross with the Iron Cross
In the database: 7369
Issued:7361