The Knights Cross of the War Merit Cross is identical as the War Merit Cross without swords, only it is larger. The Maltese Cross measures 54mm instead of 49mm and the wreath is 18mm instead of 16mm. The cross was usually made of genuine silver with the silver grade (variation from .800 to .950) stamped on the turned over V of the lower arm of the cross. The weight of this award is 33,8gram.
Attached to the upper arm is a turned over V, with three lines on each arm of the V and with an eyelet at the top. There is also a V version that is flat instead of ribbed with three lines. The hanger who is put through the eyelet can be ribbed or flat as well and it is also possible that they are different in length. Just as with al Knights Cross awards this one was also only worn around the neck. The ribbon is 1.8" wide and is the reverse of the ribbon used for the Iron Cross 1939, e.g. a central black vertical stripe 0.9" in width, flanked by a thin white and a thin red stripe, each 0.2" in width. With the examples that were awarded, were the ends of the ribbon folded in a triangle, with the length of a small ribbon on each end. These ends served as the tie to secure the award around the neck of the recipient. When the recipient owned multiple neck awards, than the hanger needed to be adjusted for the wear comfort of the recipient. This was necessary with General Otto Stapf, he owned the Knights Cross of the War Merit Cross and also the Knights Cross of the Iron Cross. This also happened with a number of Staff Officers who had earned in the WWI the Pour Le Mérite and which liked to wear this one at the same time with a WWII counterpart.

The Knights Cross was awarded in a bleu box, with a dark bleu velvet base where a round saving was made in and where the cross and hanger fitted in. The lid was covered with white silk and the space above the saving was intended for the accommodation of the neck ribbon.

The criteria to be awarded with the Knights Cross was that the recipient already had been awarded with the War Merit Cross first and second class and that a recommendation was send by the OKW or a State Minister to the Reich chancellery, where it then by Hitler personally was approved. 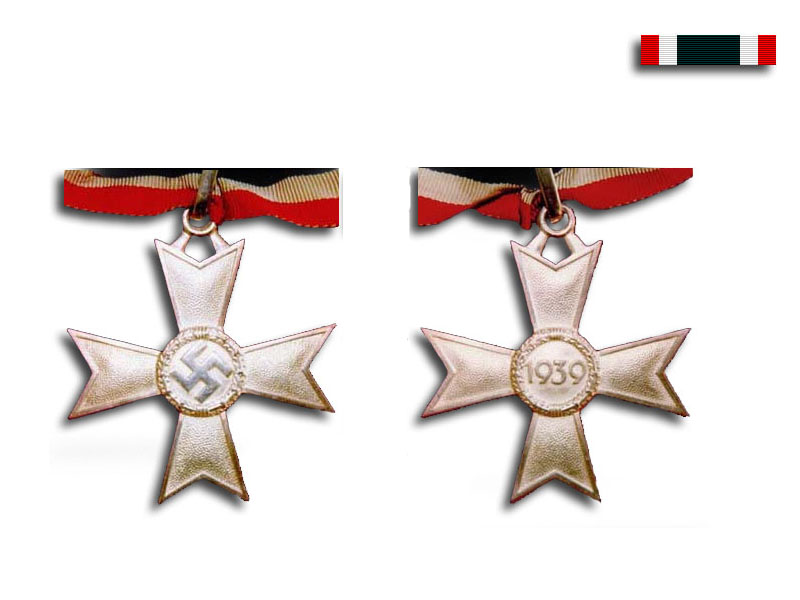