On 18-10-1939 Hitler introduced a series of these crosses, including the version with swords. Hitler needed a series of awards for the replacement of the civil version of the Iron Cross. This award could be awarded to anyone, male or female, for outstanding achievements in the war effort, concentrated around bravery and service that was not directly connected with military combat. From frontline troops to the General Staff, from Hitler Jugend to aged industrials and from factory workers to experienced academics, anyone could be awarded this cross. Non-Germans and even Jews, who were working in special projects in the concentrating camps, were awarded this award. For this reason there were multiple versions of the cross. One without swords and one with swords. The version without swords was awarded for service in the war effort, this could be political, diplomatic, economical or industrial. The version with swords was awarded for: bravery not directly connected with frontline actions. This bravery in fact, could be of a much higher standard than the one of frontline combat, considering that most of the recipients had not been subjected to enemy fire. Hitler had intentionally ordered that none of the versions of the War Merit Cross could be worn together the corresponding Iron Cross. This order was rescinded on 28-09-1941 and from this date onwards it was permitted to wear both classes of both awards simultaneously, albeit below the Iron Cross or in case of a ribbon bar behind the Iron Cross. The latter had priority over the War Merit Cross. The War Merit Cross without swords could also be awarded to a factory or a firm such as an ammunitions factory or a shipyard. These were organised along military lines and they came under the jurisdiction of the German Workers Front (Deutsche Arbeiter Front. (DAF).
The DAF was responsible for the conferment of this award, because from 01-09-1936 on wards they were awarding golden flags as a symbol for the efficiency of a factory. An emblem could be attached to the flag of the factory, showing that the workers and the factory had earned a honourable citation. The flag existed of a silk red banner, with in the centre a large black cogwheel, the symbol of the DAF. The centre of the cogwheel is white, with in a swastika in its center. The flag was decorated with silver fringes and in the right upper corner a War Merit Cross First Class, embroidered in silver.

This award is shaped like large Maltese cross and measures 1.9" across. The cross is struck in different metals, but mostly in zinc. The crosses made of zinc were subsequently bronze washed. Some specimens were struck in bronze, but these are very rare. The Maltese cross has a raised border, with a pebbled surface within these borders. In the middle of the cross lies a wreath of oak leaves with a knotted ribbon on top and bottom. In the center of the wreath a swastika is placed. The reverse of the badge has a smooth surface and shows the same wreath, except for the inscription 1939 instead of the swastika. The wreath measures 0.6" in width. In this version of the War Merit Cross two swords are placed diagonally through the cross. These swords are broad double-edged, just the Roman military design.
On top of the upper arm of the cross, an eyelet is mounted with a ring attached to it.
The badge is suspended from a ribbon, passing through this ring. The ribbon is 1.18" wide and is the reverse of the ribbon used for the Iron Cross 1939, e.g. a central black vertical stripe .55" in width , flanked by a thin white and a thin red stripe, each .15" in width.
The mint mark was usually stamped on the ring; some well known manufacturers were: Steinhauer & Lück from Lüdenscheid,(4) L. Chr. Lauer LL. from Nürnberg, (14) Karl Wurster KG from Markneukirchen, (18) E. Fred Weidmann from Frankfürt am Main, (19) Willy Annetsberger from München, (34) Julius Bauer& Söhne from Zella-Mehlis, (43) Jakob Bengel from Idar-Oberstein, (44) Frans Jungwirth from Vienna, (45) Robert Hauschild from Pforzheim, (56) Karl Hensler from Pforzheim, (57) Rudolf Tham from Gablonz ad N. (101) and Hermann Aurich from Dresden. (113)

On official occasions or military parades the cross was worn suspended from its ribbon or as part of a group. During active duty only the ribbon was worn through the second buttonhole or as part of a ribbon bar. When it was worn through the buttonhole, it was put behind the ribbon of the Iron Cross 2 and before the Eastern Winter Campaign Medal. (Ostmedaille) but among combat troops it is often seen after the latter because of the higher prestige of the Eastern Winter Campaign Medal. 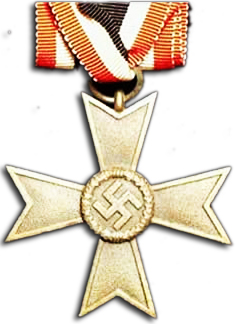