This decoration was instituted on the 17th July 1941 by the exiled Belgian Government in London. The initial decree defined this as a bravery award for acts of courage in saving lives or preventing the loss of a vessel. It could be awarded to sailors of the Navy, Merchant Navy or Fishing fleet. A post war decree published on 13th August 1948 made the medal to be awarded for the period from 3rd September 1939 till 15 August 1945. New criteria that were added contained the awarding posthumously to sailors who had lost their lives due to enemy action at sea, to sailors who had suffered two vessel sinkings due to enemy action and to sailors who had served an aggregate of two years with the Belgian fleets or the Royal Navy.

The decoration measures 32.5mm diameter and is made of patinated bronze. The suspension is by means of a ring through a fixed decorative ribbon bow design attachment to the top of the disk. Crossed anchors of matching metal are worn on the ribbon. The obverse depicts the Belgian lion rampant and the reverse the crowned monogram of Leopold III.
The ribbon is in sea green with three narrow white stripes positioned to each side.

The medal was also awarded to native sailors of the Belgian Congo, under the same conditions and on an equal footing to their European counterparts. 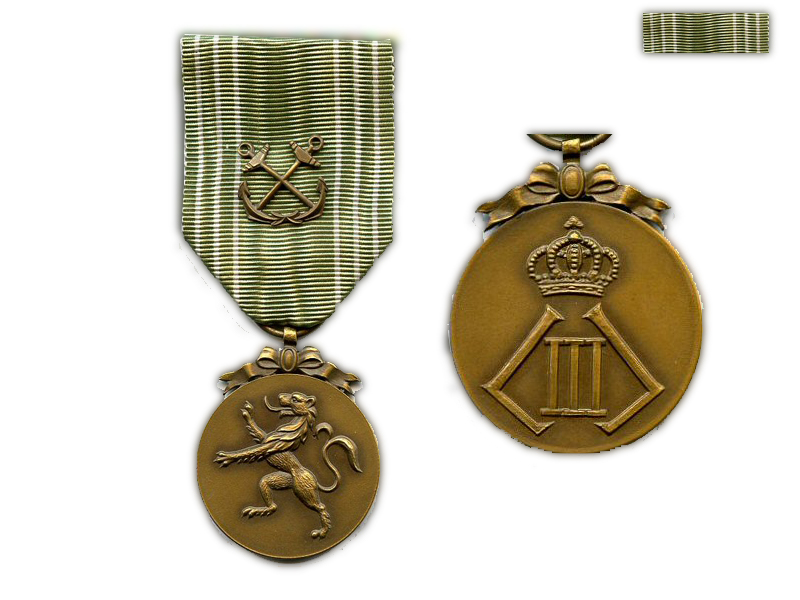